First things first: While some people might get offended that we’re discussing Marco Rubio’s sexual preferences here, it has nothing to do with judgment about his lifestyle choices. That’s his business. However, when he runs for president, attempting to attain the highest office in the land, and lies to everyone about who he really is, then it becomes everyone’s business.

Investigative journalist Wayne Madsen has published a lengthy piece on Rubio’s sordid history as a very extroverted gay man in Florida Miami Beach throughout high school and in college:

In 1989, a year before Rubio was arrested with his friend Angel Barrios and another unidentified male friend in Alice Wainwright Park in south Miami, ostensibly for drinking beer in a car after closing time in a park known as a pickup locale for gays, Rubio sang and danced in a South Miami High School troupe. The song and dance troupe was based on the Chippendales but with a very gay theme: half Chippendales and half Village People. Rubio omitted his participation in the dance troupe in his biography, “American Son.” 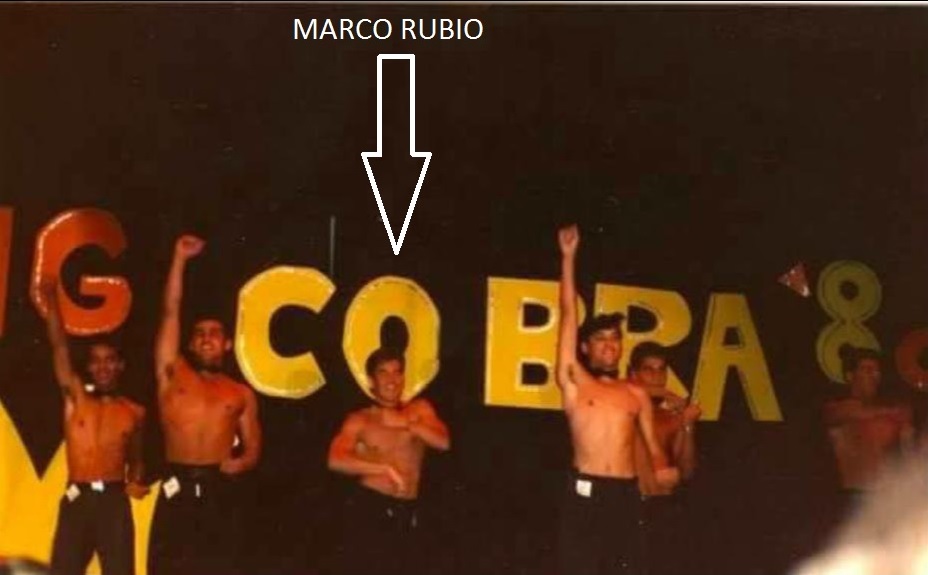 Marco Rubio, 1989, dancing and singing in a South Miami troupe that combined the Chippendales with The Village People.

The piece goes on to talk about how Rubio attended “foam parties” which were known to be exclusively gay events which the Miami New Times reported as “foam sex” for homosexual men. Rubio claims that is how he met his wife, Miami Dolphins cheerleader Jeanette Dousdebes, but it is well-known that the only women who attended these parties were women who went to gay clubs in order to avoid having men hit on them (because all the men were homosexual).

It’s a far cry from the conservative, religious father of four who is supposedly against same-sex marriage. If he would lie about something so fundamental about himself in an organized campaign of deceit, what else would he lie about?

Madsen’s article also points out that his parents weren’t the poor struggling immigrants who fled Cuba because of communism that Rubio has painted them as, but instead:

His Cuban parents, according to GOP insiders, did not emigrate from Cuba to escape Fidel Castro and Communism — they left Cuba for America in 1956 — but were Havana casino workers employed by Jewish mob boss Meyer Lansky and brought to Florida. From Miami, they eventually left for Las Vegas to work in mob-owned casino hotels. Rubio’s father, Mario Rubio Reina, worked as a bartender in Las Vegas casinos while his mother, Oriales Rubio, was a hotel maid. Rubio has falsely claimed that his parents fled Castro and Communism. In 1956, the U.S.-supported fascist dictator, Fulgencio Batista, was fully in control of Cuba.

Speaking of immigration, Rubio has also been accused of saying one thing about immigration reform to Spanish-speaking Univision in Spanish and then saying a totally different thing in English to the English-speaking segment of the American population:

Breitbart News exposed how Rubio himself endorsed Obama’s first executive action acted on behalf of illegal aliens, the Deferred Action for Childhood Arrivals (DACA), in Spanish to Jorge Ramos, then his campaign claimed he didn’t—then they did when pressed.

“I believe DACA is important. It can’t be terminated from one moment to the next, because there are already people benefiting from it. But yes, it is going to have to end. It can’t be the permanent policy of the United States, and I don’t think that’s what they’re asking either. I think everyone prefers immigration reform,” Rubio said in Spanish, according to a translation, endorsing an Obama administration policy that brought tens of thousands of Third World migrants from Central America, surging across the U.S. border.

And, on top of that, even the mainstream media is confused about what religion Rubio is supposed to be, considering it has changed so many times over the years… from Catholic to Mormon to Catholic to Baptist and back to Roman Catholic.

Again, it isn’t that it matters what Rubio’s religion is, but why can’t he even keep something that basic about himself straight?

Rubio has also lied about his financial records. Not even kinda lied, or mixed up the details, or obscured the truth a bit… no, he just flat out lied. These are court documents we’re talking about.

It seems the American public knows about as much about Rubio as they know about Obama at this point. Guess he’d fit right in at the White House.

And this is someone who has vowed that the first thing he’s going to do as president is call for a Constitutional Convention. SCARY!

What do you think warhawk Rubio is referring to when his tagline calls for and his website asks if we’re ready for “a new American Century?” PNAC and a “new Pearl Harbor”, anyone?

Contributed by Piper McGowin of The Daily Sheeple.

Piper writes for The Daily Sheeple. There’s a lot of B.S. out there. Someone has to write about it.

Piper writes for The Daily Sheeple. There's a lot of B.S. out there. Someone has to write about it.