Canadian-based group Islanders Say No to GM Salmon is calling on Premier Ghiz to ban the production of genetically modified (also known as genetically engineered or GE) Atlantic salmon eggs in PEI. As the United States edges closer to approving human consumption of GM salmon in the next months, increased attention is now focused on Canada, and in particular PEI, as the only source of GM salmon eggs on the planet. 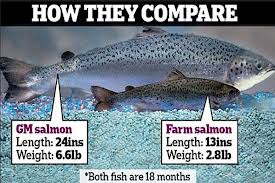 The experimental, lab-created Atlantic salmon eggs have been produced by AquaBounty, an American company, at a remote facility in Bay Fortune, PEI for more than a decade while it tries to convince the U.S. government to allow the mutant fish into grocery stores.

AquaBounty proposes to produce the GM salmon eggs in PEI, ship them to Panama for growing out and processing, then send the GM fish into the U.S. market. Using PEI and Panama to produce the fish allows AquaBounty to avoid an even more contentious environmental assessment process in the US, said Islanders Say No to GM Salmon spokesperson, Sharon Labchuk.

Already the US government has received more than 30,000 comments from citizens and groups as part of the public process to assess the GM fish. Almost one million people have signed an online petition from Avaaz, a global civic action organization, against GM salmon.

Even the aquaculture industry doesn’t support GM fish and says there is no market for them.

“Scientists say the escape of just 60 GM salmon, and fish escape all the time from aquaculture facilities, could mean the end of the wild Atlantic salmon, a species already struggling to survive,” said Labchuk. “The mutant fish are engineered to produce unnatural amounts of growth hormones causing them to grow quickly. The worry is these fast-growing frankenfish will outcompete wild salmon for food and breed with them, effectively eliminating the species.”

AquaBounty claims the GM salmon will be grown in land-based pens in Panama but the company will have no control over regulations in other countries once the eggs are marketed around the globe. The company claims the fish are sterile, but its own data submitted to the U.S. government shows up to 5% of the fish will be capable of breeding.

“A coalition of PEI organizations has lobbied both Liberal and Tory governments over the years for a GM-free province,” said Leo Broderick, Islanders Say No to GM Salmon representative. “Now because of the urgency of the situation we’ve come together to focus on a GM salmon ban. Canada has not yet approved commercial production of the GM salmon eggs but we fear if the U.S. gives approval to human consumption of GM salmon the Harper government will quickly follow suit and approve not only the sale of the frankenfish in grocery stores but the production of mutant salmon eggs as well,” said Broderick.

This month the Alaska House of Representatives came out in opposition to GM Atlantic salmon, saying it has concerns about threats to human health and wild salmon stocks, and potential negative impacts on the wild Alaska salmon fishery. Islanders Say No to GM Salmon asked Premier Ghiz to similarly tell the Harper government that PEI opposes GM salmon. The group said that even if Prime Minister Harper does approve GM salmon egg production, Premier Ghiz has the authority to ban production in PEI.

“There is no evidence the frankenfish are safe to eat,” said Mary Boyd, group representative. “Genetically engineered salmon have higher levels of IGF-1, a growth hormone that according to experts may increase the risk of several types of cancer.”

“In past years, international media reported on PEI’s role in AquaBounty’s quest to market the world’s first GM animal for human consumption,” said Labchuk. “Attention is now intensifying and PEI is poised to be a critical player. Do we want PEI known around the world as home of the frankenfish, the province that could have stopped GM salmon from wiping out Atlantic salmon but didn’t? There’s nothing to gain and everything to lose by letting this American company, concerned only with lining its own pockets, set up shop in PEI. It’s up to Islanders to say no to GM salmon.”

Islanders Say No to GM Salmon is a group organized to push for a ban on GM Atlantic salmon eggs in PEI but the founders of the group are all long-time opponents of GMOs in PEI. Leo Broderick, Sharon Labchuk and Mary Boyd formerly worked in collaboration for years under the banners of organizations we represent, respectively, the Council of Canadians (PEI Chapter), Earth Action, and the PEI Health Coalition.

Opposition to genetically engineered organisms began in PEI with the introduction of Monsanto’s NewLeaf potato in the mid-1990s. Our campaign, assisted by many national and international organizations, forced Monsanto to withdraw the GM potato from the global market. No GM potato has been approved in Canada since.

We began to campaign against AquaBounty and its GM Atlantic salmon in 2000, including participating in an action with Greenpeace at the AquaBounty site that was broadcast around the world. We campaigned for PEI to be GMO-free zone beginning in 2001 culminating in legislative public hearings in 2005. More presentations were made at these hearings than at any other legislative hearings in the history of the province. With the U.S. poised to make a decision in the coming months on approving GM salmon for human consumption, our efforts in PEI will ramped up.

We are members of the Canadian Biotechnology Network (CBAN), a coalition of anti-GMO organizations, and work closely through CBAN with our American colleagues on issues like the GM salmon. With CBAN we’ve participated in public panel presentations in PEI and other provinces and attended U.S. government hearings on the GM salmon.