The role of law enforcement used to be pretty clearly understood from the perspective of the public they were entrusted to protect, the criminals who tried to hide from them and the public servants themselves. Growing up, police officers were admired and respected and could more or less be counted on in times of danger. It was common advice given out to children not too long ago if they were lost to “find a police officer”. The understanding was that a police officer would know what to do and take care of you or the situation in some way appropriate to the time. Not that they were baby sitters, but that these officers held a trust with the public that was based on mutual respect, the responsibility of their job and to some extent, dependence on one another for a peaceful coexistence.

Flash forward to today and the smiling, benevolent (to those who were innocent) peace officer is long gone. You are more likely to see a person dressed in military gear, steroids coursing through their veins, shaved head and barking orders than you are to see a smiling face if you have trouble. Why do I have this opinion of law enforcement now? Maybe it is the culmination of too many stories of abuse, of too many videos of misconduct by these same police officers who were supposed to serve and protect. Now, a law enforcement officer isn’t someone to trust or turn to if you are threatened. More often a law enforcement officer is someone to watch carefully or else you could be tasered, beaten to death , strangled until you pass out, or they could wind up practicing their boxing moves on you.

How did we come to this point? 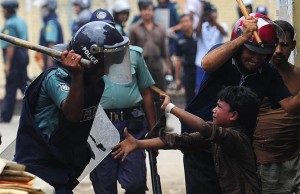 Do we really need police that beat children with clubs?

Some may say I am generalizing in a way that misses out on all the good things that police officers do. You might say that I am only focusing on a few bad apples and this could hurt the overall image of police who really are trying to maintain that trust that we depended on not too long ago. My argument to that point is that it isn’t me smashing people’s faces in. It isn’t anyone I know that can get away with beating up a senior citizen for jaywalking, or stealing their money, kicking them in the head while they are hand-cuffed or killing them in some instances. It is these bad apples supposedly that are giving our police and sheriff departments a bad name and I think that the blame has to fall squarely at their feet. If the police are really good, then these bad apples should have been dealt with and the problems should be going away, not getting worse, right?

I discussed the militarization of our police forces in a few articles on the Prepper Journal. Most recently it was in conjunction with the government giving away military MRAP vehicles to police forces and my opinion that militarization of police is a dangerous slope. They aren’t the military and they aren’t supposed to be viewing us as the enemy. You take all the examples of abuses of power, militarization and a prevailing attitude by a growing number that regular civilians are there to be brutalized by police if they have a bad day and I wonder if we wouldn’t be better off without them. Would we as a society be in a better place with no police and we had to depend on ourselves and our neighbors for security?

According to an article on NPR, an Oregon town had to step in and become their own police due to budget cut-backs. The reason why this volunteer force formed has nothing apparently to do with any abuse, but the very fact that the jobs that police had been doing are now being taken care of by regular civilians could be a sign of what may be possible in other locations.

In the small town of Merlin, members of the North Valley Community Watch Responder Team sit in a classroom in a civic building. At the whiteboard is Ken Selig, a 33-year veteran of the sheriff’s department. Faced with being laid off, he retired.

Today, he’s preparing the volunteers for a training exercise. They’re practicing how to search a building where an intruder may be hiding.

When it’s time for the drill, team members cautiously maneuver down the hallway, searching room by room with unloaded guns drawn.

“Neighborhood watch!” they shout. “Police are on their way! Show us your hands!”

Selig says the cutbacks left a vacuum. Soon, he and other concerned neighbors formed the community watch.

“So we started to train,” Selig says. “I used the same lesson plans, the same things that when I taught at the academy.”

The group began taking those lessons into the community, something that made a difference to resident Jeff Bailey. Awhile back, Bailey noticed a tarp hiding something way back on a neighbor’s forested land.

The sheriff’s department was contacted but didn’t respond, so residents called the Community Watch Responder Team. Members confronted the squatters, advised them that they were trespassing, and they left.

Do we really need to pay people to beat us up?

The people in this town are in a sense acting out of need. They have no money for additional police officers so volunteers have taken the responsibility into their own hands; in this case, with training from retired police. What is missing here? I will be honest and say that these civilians could suffer from a lack of training. Just like full-time police, they could make bad judgment choices and you could have the same type of bad apple that needs to abuse people to feel superior. Could these volunteers beat you up just as easily as the cops in the examples above? Yes, but I don’t think it would happen. 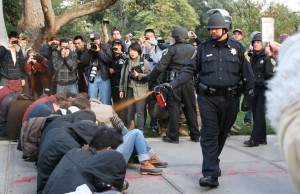 Sitting peacefully? How about some peeper spray in your face?

I believe that police officers today have a sense of entitlement, just like so many in our society. They feel that their badge entitles them to a higher level of respect than a regular citizen even though police are regular citizens too. I think that they look down on the people they are supposed to work for. Instead of restraint, I think they are trained to control the situation with force as the first line of response and that these police officers are also trained that it is better to shoot someone “for their own safety” than it is to take the time to figure out what is going on first.

The bottom line is that anytime you put someone in authority, it takes a responsible and mature person to wield that authority in a way that is going to reflect well on themselves and their position. When you have the responsibility to carry a gun and a taser combined with the legal authority to shoot and detain anyone, you must be held to a much higher standard. We have too many police officers who for a number of reasons aren’t able to do their jobs without resorting to abuse and violence. The result from these increasingly frequent actions is a society that trusts the people who are supposed to be bastions of honor less, and fears them as ruthless gangs with the blessing of the state more. These police are the new thugs of society.

If we were more responsible for taking care of ourselves I think this could have the dual benefit of making the people of society act nicer to one another and need police officers less. Should we go back to the Wild West days and handle everything with a gun fight? No. But, I don’t think we need police busting down doors, punching women in the face and threatening to kill the citizens they have sworn to protect either. It is just that the culture is so much more disrespectful now you say. Again, that isn’t any excuse to submit to this type of abuse from authority. I would rather get in a fight with my neighbor than have a police officer punch me for jaywalking. Maybe if my neighbor and I shared responsibility to make sure our neighborhood was safe, we would get along better.

What does any of this have to do with Prepping?

I have said before that prepping is a lifestyle that people choose to live. This lifestyle is evidenced by taking steps to protect your family from any number of threats out there. Some people are preparing for natural disasters. Others are preparing for government tyranny or an economic collapse. Still others are prepping for a pandemic outbreak. All of these situations have the potential for extreme circumstances. In some of these extreme circumstances we have seen in the past, police curtail civil liberties and the worst examples of this would be martial law. In any situation, if the people who are supposed to maintain law and order are no worse than the gangs you might face in their absence what would you do?

It may be in our future that we get a chance to see how this works. If our economy collapses as some fear there will be more police layoffs. In Detroit a city that is already beyond broken, the police chief knows that an armed responsible citizenry is more valuable (and more realistic) than a ton of police officers. Chief James Craig said “Arm yourselves, and criminals will think twice about attacking you.” Could this apply to you in your neighborhood one day? Will we see a time when we are responsible for taking care of our family’s and our neighborhoods because the police simply can’t or we as a society get so fed up we say enough. Will we all be better off (not considering the emergency) without the police?

What do you think?

Continue Reading
You may also like...
Related Topics:cops, police brutality