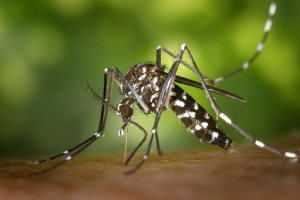 As a child, I used to travel to Texas every summer to visit some of my relatives. Every time I showed up for a week or more, there were certain conditions there that were consistent from year to year. There was always an abundance of mosquitoes, and despite experiencing rain in the middle of the “dry” season every time I showed up, there was always a drought (strange right?).

Well, it looks like Texas has solved one of those problems, albeit in the worst possible way. Over the past week, the state has been drenched in rain to the tune of 37.2 trillion gallons. That’s enough to cover the entire state in 8 inches of rain, most of which has fallen in the past few days. The soil throughout Texas is totally soaked, which means that even the smallest of rains could cause flooding.

Not that they haven’t had plenty of that already. As of writing this, 24 people have died due to flooding, hundreds have had to be rescued, and 11 more are still missing. Flash floods are stranding drivers and rising waters have washed away homes. While minor streams are overflowing and low lying areas are quickly being submerged, larger waterways such as the Trinity River that runs through Dallas, have risen to their highest levels since 1989. By all accounts this is an abnormal event, even for the flood prone region.

Fortunately, all things must come to an end, and these floods are no exception. The rains are expected to relent next week, and some of the more tumultuous flood waters should recede in short order. But when they do, Texas may be faced with another threat.

Most disasters arrive alone, but they tend to leave presents behind on their way out. In this case, the Lone Star State may be faced with one of the worst mosquito seasons in recent memory. If there’s two things that mosquitoes love, it’s heat and water, both of which will now be in abundance. If Texas had a mosquito problem when it was dry, you can bet they’ll have an unprecedented swarm of the critters to deal with, now that there will be puddles of standing water everywhere.

And it goes without saying that dealing with itchy bites won’t be the only concern for Texans. Mosquitoes are notorious for harboring diseases, of which the following have been known to show up in that state:

As well as a few others that mainly affect animals:

So it’s important for homeowners in this region to take certain measures to prevent the proliferation of mosquitoes. This requires having an eye for things on your property that might contain even the smallest puddles of water. Seriously, mosquitoes can breed just about anywhere. As a natural preventative, many have begun placing pungent smelling flowers and herbs in doorways as a way to keep bugs and especially mosquitos at bay. I even made homemade citronella candles last year to keep the mosquitos away. But we cannot always go to these measures – especially when we are away from home.

Make sure you clear any trash or debris in your yard such as tires or cans, and don’t leave any water out in flower pots or water bowls. It’s also a good idea to secure any leaky pipes you might have outside of your home, and clear out any leaves in your gutters. In some cases you may need to fill or drain spots that tend to collect water on your property. As an added defense, it’s also pretty easy to build traps that will cull the local mosquito population.

As for protecting yourself and your pets, I’m sure just about every Texan household has a can of Off! or DEET lying around. But if you’re looking for something a little more natural, there are several essential oils that are known to repel mosquitoes, including:

You can make a bug spray using these essential oils and mixing it with witch hazel and water. Remember – more oils make a stronger bug spray!

As well, you can also make a mosquito repelling balm using essential oils. Click here for the details.

So don’t let those mosquitoes eat you alive Texas. While the risk of disease has always been low, statistically speaking; even without that threat, this year may have a horrendous mosquito season in store for you. Take these precautions, and protect your family from the winged menace.

Why You Should Worry About Mosquitos

Chikungunya: What is it, and how can you avoid it?