We’re told Gate Rape saves lives – pure conjecture, since it’s all hypothetical. After all, not one “terrorist” has been caught (much less stopped) as a result of  the terroristic tactics of the  Blue Shirted Goons. Which is a pretty piss poor record, given they treat everyone as a presumptive terrorist.

You’d think by now they’d have caught at least one actual terrorist.

But lives have been lost as a result of the terroristic tactics of the Blue Shirted Goons. Not conjecture, either. Real people – thousands of them – dead because of the TSA.

Dead – because they chose to drive rather thanfly. Anything – rather than Submission Training and Gate Rape. Even if it means an 18 hour trip vs. a three hour flight.

According to data compiled by Cornell University researchers, the ugsomeness of dealing with the TSA has pushed a goodly number of former air travelers into their cars – and back onto the roads. This, in turn has led to a measurable increase in monthly traffic fatalities – about 242 per month that would otherwise not have occurred. Some quick addition is in order. Let’s be easy on our calculators – and generous to the Blue Goons – and assume the figure is off by more than half. Let’s say it’s only 100 additional deaths per month attributable to TSA Avoidance Syndrome. That’s 1,200 deaths annually. Times four equals 4,800. In less than four years, then, TSA has managed to get more Americans killed than Osama bin Laden.

Only he’s finished – and the TSA is just getting started.

What will happen when the Blue Goons decide that cavity searches are now necessary for “security” reasons? Or perhaps stun bracelets  – you know, like you use to deal with an unruly dog. How about that?

Farcical? Hyperbolic? Do a mental exercise and imagine it’s 1995. Ask any ten people at random whether they would believe that within a decade or so, they’d gave to spread their legs, hold out their arms and submit to a government goon literally handling their privates – including the privates of little children and old people in wheelchairs. Something not even the Nazis did to the Jews. Right here in the good ol’ USA – land of the (formerly) free and home of the (erstwhile) brave. And bear in mind that the stun bracelets idea was actually floated. So we know they are thinking along such lines. “Freeze training” has already been tried, too. 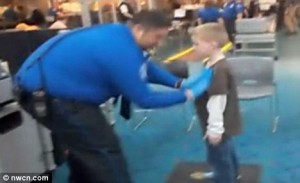 It’s far from over, that’s the point. Or rather, the point of the TSA is not to catch terrorists, but to get Americans used to being terrorized. Invasion of our personal space is just for openers. Bet your bippie more’s coming.

As a result of these degradations, more and more people can be expected to opt out – of flying, altogether.  They’ll do the only thing they reasonable can – take to their cars – because cold-cocking these blue-shirted bastards isn’t (unfortunately) a realistic option.

And because driving is riskier than flying, more people will be dying. A fact – unlike the hypothetical claims about “catching terrorists” – remember, not one so far –  touted by the Blue Shirted Goons.

Project the 1,200 dead annually out over another ten years: That’s 12,000 people in the ground, courtesy of TSA.

Courtesy of the government.

Osama would have needed a dirty nuke, probably, to match this body count.

The one – the only thing – government is actually good at is destroying things. First our rights, then our lives. Here again we have tangible proof of this. Yet all too many people will nonetheless be duped by government’s claims – never substantiated but always asserted with insolent certainty – that its actions “save lives.”

Even as the bodies pile up all around us.

Is there anything government touches that doesn’t result in carnage? The answer to that question is obvious. Yet government is never held accountable for the mayhem it causes. If “terrorists” killed 242 – or 100 or even 10 – people every month, it would be the reason (and a good reason) to do something about it. But when government policies result in deaths, they become – in the immortal callous words of JV Stalin – statistics. 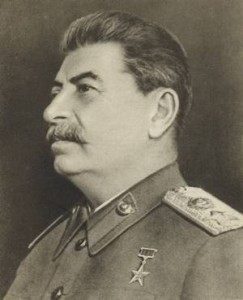 We are often  admonished by government – and those truckling in favor of expanded government – that “if it saves even one life” then it’s worth whatever it is that’s being advocated. Why is it that this logic never applies togovernment? What is this blind spot that so many people have? This inability to see the danger posed by the entity that claims it seeks to “protect” us?

So what is likely to happen? The Blue Goons won’t be retired – and expected to find honest work. Instead, their ranks will be expanded – as will their “duties.” Note carefully that the acronym does not stand for AirportSecurity Administration. The Blue Goons are coming to aroad near you, too. Probably soon.

That way, they can claim they’re thwarting even more in an endless conga line of  hypothetical terrorists – without, of course, ever having to show they’ve caught an actual, real-live one – and have plausible deniability about the upticked body count on the highways and byways. Because no one will be able to claim people are driving to avoid the perils that come with flying.