An independent, critical account of the American economy would soon raise questions about the structural causes of inequality.

That some sectors of the economy will be doing better than others is natural. If you’re a landlord or mobile-apps coding genius in San Francisco, the economy is excellent. Those working in the vast North American oil-patch are experiencing a boom economy. Realtors in resurgent markets such as Miami are having their best year since the top of the bubble in 2007.

This can be viewed through any number of lens, one of which is the inherent inequality of capitalism: capital and labor flow to what is most profitable at this point in time, and capital and labor left stranded in low-yield, declining sectors suffer poor returns and lower wages.

This inequality can be seen as the systemic cost of a dynamic economy in which capital and labor are free to move to better opportunities.

It can even be argued that the more dynamic and fast-changing the system, the greater the inequality, as those who move fast enough to take advantage of new opportunities reap most of the gain (The Pareto Distribution of 80/20 is often visible in these sorts of distributions).

Economic systems that can be gamed by bribery or purchased political influence are also inherently unequal, as those with power are more equal than those without power. This is the classic feudal society or crony-capitalist kleptocracy.

Those benefitting within the crony-capitalist kleptocracy will of course claim that the society is a meritocracy and their advantages are the result of their own hard work and brilliance (and perhaps luck if they are honest enough to admit to being lucky).

As a result, it is difficult to tease apart the capitalist functions of the U.S. economy from the cartel-state, crony-capitalist kleptocracy that I call neofeudalism.

What we do know is that the top 1/10th of 1% is reaping most of the income gains.

We also know that household debt has far outstripped the growth rate of the economy as measured by GDP, evidence that much of the prosperity is based not on wealth creation or savings but on expanding credit: 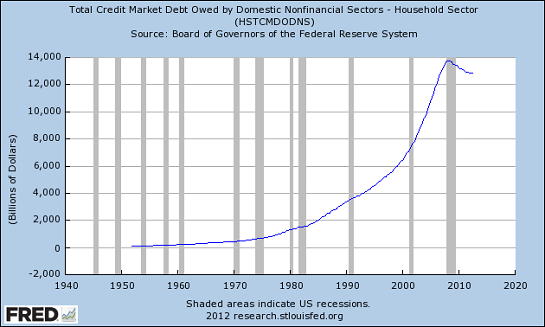 And we know that real income (adjusted for inflation) has declined. Since this is the median household income, we can project that the bottom 90% are actually doing much less well than shown here, as income gains mostly flow to the top 10%.

Individuals are not powerless to change their circumstance. This is the basis of the American Dream (and also the Chinese Dream, Mexican Dream, Iraqi Dream, etc.) The question then becomes: how is the system “wired,” i.e. what are the obstacles, incentives and disincentives presented to individuals who are trying to better their circumstance?

It’s important to ask this question, and to be honest in our assessment of victimhood, oppression and individual responsibility.

The widening chasm refers to both the income chasm between the financier class (1/10th of 1%) and the 99.9%, and the chasm between the real economy and the official narrative of the economy. The essence of propaganda is to substitute an officially conjured narrative for independent critical thinking.

In the American propaganda narrative, the central state and bank are admirably supporting a “recovery” that though uneven in places is soundly on the path to widespread prosperity.

The primary support of this narrative is ginned-up statistics (bogus unemployment rate, etc.) and asset bubbles inflated by easy credit to the masses and unprecedented low-cost credit to the financier class. These are the basic tools of propaganda: choose a metric that you can control or game, and make that the measure of success.

In the Vietnam War, the body-count of enemy combatants was the metric chosen by the propaganda machine to measure success. Unsurprisingly, stacks of dead civilians were duly counted to boost morale and to mask the failure of the war’s managers.

Nowadays the unemployment rate is the new body-count: a metric that can be gamed to reflect an illusory success. Just erase tens of millions of people from the workforce, count every 4-hour a week job and dead-reckon a few million jobs were created outside the statistical universe (the Birth-Death Model of small business creation) and voila, the unemployment rate magically declines even as the economy and the job market stagnate.

The other metric of choice is the stock market, which has been inflated by central bank policies and identified as the gauge of recovery by a political class anxious to deflect inquiries into its systemic corruption and monumental policy failures.

The official narrative carefully leaves the kleptocracy, crony-capitalism and cartel rentier arrangements firmly in place. As noted above, those benefitting from the cartel-state neofeudalism defend their perquisites as “natural,” i.e. the result of meritocracy. This adds another layer of propaganda persuasion to the official narrative.

An independent, critical account of the American economy would soon raise questions about the structural causes of inequality by asking cui bono, to whose benefit is the system arranged?

If we can honestly say that the system’s primary source of inequality is a dynamic economy that rewards the top 10% who are best able to deploy skills and capital, then that suggests one set of potential remediations.

If however we find the system is unequal largely as a result of its cartel-state structure, then that suggests a political and financial reset is needed to clear the deadwood of corruption, malinvestment and state/central bank manipulation of statistics, finance and credit.

We had to destroy the economy to save it. Indeed.