With security heightened throughout the country, elections in Syria are proceeding normally.

The country has largely been pacified following the retreat of terrorist opposition forces from Homs in early May.

The  elections have not been disrupted and no major terrorist event has been reported.

Reports confirm a high turn out.

The aftermath of this election including the response of US-NATO is of crucial significance.

Washington has already announced that it will not recognize the results of the June 3, elections. According to the New York Times, the elections are taking place “Amid Fear and Pressure” and are therefore categorized as “illegitimate”.

In a twisted logic the elections are portrayed by the Western media as an obstacle to achieving real democracy. The Western consensus is that the elections will contribute to a “continuation of the civil war” despite the defeat of the insurgency.

A “Continuation of the Civil  War” is a US Foreign Policy option. It is a means to implement Regime Change.

Scenarios of civil war are on the US-NATO drawing board. Confirmed by US statements, the underlying military-intelligence agenda is to foster a continuation of the civil war, namely to rebuild the terrorist insurgency.

There are indications that Washington and its allies are planning a new wave of destabilization involving the influx of weapons and death squads to be carried out in the wake of the June 3 Elections. This “civil war destabilization scenario” is to be supported by a new package of US military aid announced by President Obama on May 28th, less than a week before the June 3 elections.

In mid May, two weeks before the elections, Secretary of State John Kerry confirmed that the US and its allies “would increase all aspects of support for the mainstream Syrian opposition fighting to overthrow President Bashar al-Assad”. 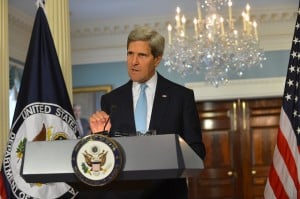 Confirmed by John Kerry, these efforts consist in accelerating the flow of weapons to opposition fighters ahead of the elections:

“Every possible avenue will be pursued by one country or another,… I’m not going to discuss specific weapons and what country may or may not be providing [weapons], but out of today’s meeting [May 15, less than 3 weeks before the June 3 elections] every facet of what can be done will be ramped up, and that includes a political effort, aid to the opposition… economic efforts and sanctions.” (quoted in Guardian, May 15, 2014)

Kerry’s May 15 statement to speed up the flow of weapons to opposition rebels was followed two weeks later by a formal announcement by President Obama.

A week before the Syrian elections at his May 28 West Point Military College address, president Obama formally confirmed a new military aid package to be channeled to Syria’s “freedom fighters”.

Was this new flow of US military aid initiated prior to the elections?

According to a statement (May 22, 2014), by Mr Ahmad Al-Jarba,Chairman of the “opposition” Syrian National Coalition (SNC), the weapons will arrive “within weeks”. A subsequent report coinciding with President Obama’s official confirmation on May 28, stated within a period of “three weeks”, which includes the week leading up to the June 3, elections:

“[Mr Al Jarba] …did not not specify the quality of the weapons or reveal whether they will include the highly effective “Man Pad” anti-aircraft missiles, which could effectively change the balance of power on the ground” (5pillarz.com, May 31,  2014)

President Obama “spoke of two-pronged support aimed at assisting the armed opposition” against both Bashar Al as well as against the jihadist terrorist organizations which are fighting government forces.

This contradictory statement by president Obama was largely intended to reaffirm America’s commitment to “fighting terrorism”, rather than “supporting terrorism” in Syria, something which by now has been amply documented. The evidence confirms that the opposition terrorist insurgents are supported by US-NATO and Israel, trained in Qatar, Turkey and Saudi Arabia. They are the foot-soldiers of the Western military alliance.

According to reports, President Obama  … “wants to combat the burgeoning power of the Islamist armies – which the US identify as “terrorists”” while financing and training the so-called “moderate opposition”.

This is an obvious smokescreen: There is no such thing as a moderate armed opposition in Syria.

While the Western media, echoing Obama’s concern regarding the Islamic State of Iraq and the Levant (ISIL) and the al-Nusra Front, fail to acknowledge that the bulk of US military aid is channeled covertly to these two terrorist organizations, which are supported by US intelligence.

The timely resolution of France at the United Nations Security Council directed against Syria was intended to create confusion in the weeks leading up the elections:

Syria’s Ambassador to the UN, Bashar Ja’afari, accused the UN of facilitating a plot against the regime. France, he said, was inciting public opinion against Syria within the UN and had launched a “futile” bid to have the Syrian file investigated at the International Criminal Court (ICC).(5pillarz.com, May 31, 2014)

According to Ja’afari, France’ resolution was aimed at

“piling up political pressure on the Syrian government and throwing into confusion the presidential elections so as to end up in a state of constitutional, political and security vacuum.” (Ibid, emphasis added)

The latest reports out of  Damascus suggest that the security situation is under control. No incidents were reported on the day of the elections. The elections are proceeding normally.

Michel Chossudovsky is an award-winning author, Professor of Economics (emeritus) at the University of Ottawa, Founder and Director of the Centre for Research on Globalization (CRG), Montreal and Editor of the globalresearch.ca website. He is the author of The Globalization of Poverty and The New World Order (2003) and America’s “War on Terrorism”(2005). His most recent book is entitled Towards a World War III Scenario: The Dangers of Nuclear War (2011). He is also a contributor to the Encyclopaedia Britannica. His writings have been published in more than twenty languages. He can be reached atcrgeditor@yahoo.com