The authors’ thesis doesn’t explain the 47-year downtrend of labor’s share of the economy.

A provocative essay, Don’t Blame the Robots, makes the bold claim that “Housing Prices and Market Power Explain Wage Stagnation.” (Foreign Affairs) In other words, the stagnation of the bottom 95% of wages isn’t caused by automation or offshoring, but by the crushingly high cost of housing:

“Yet recent academic work in macroeconomics suggests that current wage stagnation has less to do with robots and more to do with real estate and market power.

The market power argument is straightforward: as competition declines, cartels and quasi-monopolies scoop up a larger share of the national income, leaving relatively less for labor.

The high housing costs crush wages argument is more nuanced. The high cost of housing means that much of the nation’s available capital stock is invested in housing, rather than in productivity-boosting capital investments. This diversion of capital from productivity to housing reduces the productivity gains that enable higher wages.

The authors describe a second dynamic: the soaring cost of rents / purchasing housing in high-productivity cities such as New York and San Francisco effectively locks out lower-productivity/wages workers, pushing them into low-productivity locales which then have an oversupply of labor, further pressuring wages.

The authors claim that wages have dropped because workers have to devote a larger share of their earnings to housing, but this erroneously conflates real wages and disposable income: the two are entirely different.

If a worker earns 12% more pay annually, and inflation is 2% per annum, her real (adjusted for inflation) wages rise by 10%. If her housing costs rise by 20% in the same time period, her disposable income, i.e. what’s left after paying for housing, declines despite her higher income.

In other words, the higher cost of housing may well lower disposable income, but that’s not the issue: the issue is the stagnation of real wages paid by employers to employees (and the earnings of self-employed people).

While these arguments describe a little-noticed connection between capital, housing costs and wages, the case is not entirely persuasive. While it’s clear that sky-high rents in Manhattan and San Francisco are unaffordable to average wage earners, what about cities in the Midwest, Southwest and Southeast with much lower housing costs?

In cities where it’s still possible to buy a small, older home for $60,000 – $90,000, and rent an apartment for $450 to $700 per month, shouldn’t the wages be higher, since the cost of housing isn’t prohibitive? Some cities provide a mix of high and low-productivity jobs and low to moderate housing prices. If the authors’ premise is correct, there ought to be a discernible correlation between low housing costs, a mix of higher-wage and lower-wages jobs and broadly higher wages.

While I don’t know of any studies that track these variables, my sense is cities with relatively low-priced housing exhibit the same stagnating wages for the bottom 95% as high-cost cities.

I think it more likely that high housing costs exacerbate the income-wealth divide rather than explain secular wage stagnation. Take a look at this chart of the spending patterns of the top 5% and the bottom 95%. Clearly, the top 5% have pulled away from the 95%. Wages aren’t stagnating for all workers; rather, wage gains are flowing upward to the favored class that can optimize managerial/technical/financial expertise.

The authors’ thesis doesn’t explain the 47-year downtrend of labor’s share of the economy. Housing was relatively stable for much of the past four decades, while labor’s share of GDP fell steadily. Even more unsettling, labor’s share fell off a cliff in the period 1990 to 1996, when housing was flat even in high-priced regions. 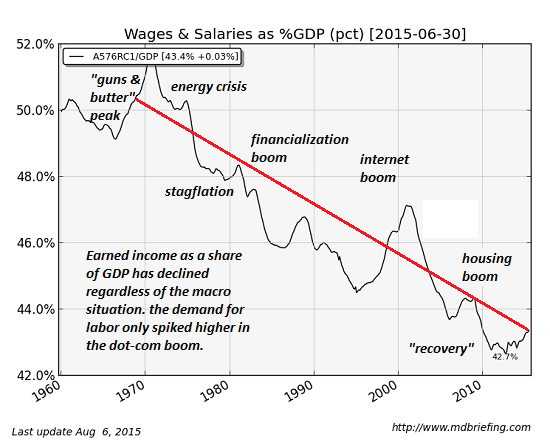 The siphoning off of capital from productive investments to unproductive housing is a core dynamic in explaining the stagnation of productivity. But this doesn’t explain why employers either can’t or don’t have to pay higher wages in an era of steadily rising costs for nearly every major expense: not just housing, but healthcare, college tuition, etc.