Consider this chart of the gold-oil ratio.

By all accounts, the world is awash with oil: production remains high while demand is softening along with the global economy. This has led many observers to forecast further declines in oil from the current price (in USD) of around $35/barrel.

Despite the downward pressure on oil, the devil’s advocate wonders: could oil be setting up a tradable bottom? By tradable bottom I mean a level from which oil might bounce. For example, oil reversed from the low $40s earlier in 2015 and climbed to about $60 before resuming its downtrend.

Put another way: if oil’s ultimate bottom is $20/barrel, it is likely to experience sharp rebounds/retraces along the way, just as it did early in 2015. These near-term lows are tradable bottoms rather than the final long-term low, which is anyone’s guess.

Consider the daily chart of WTIC oil, which is tracing out a bullish descending wedge. The stochastic is also oversold. MACD is weak and bleak, but the punch through the lower Bollinger Band leaves the door open to an exhaustion move. 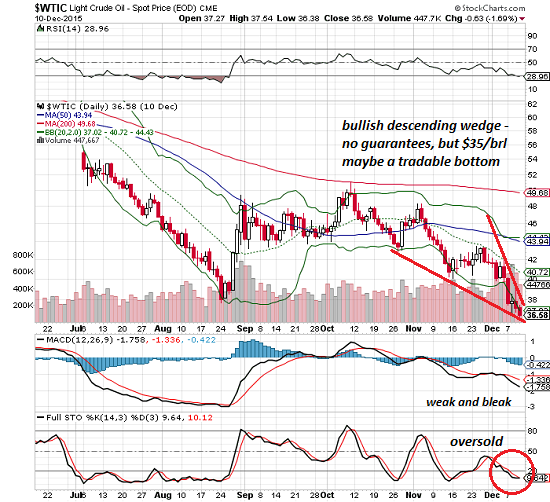 The weekly chart of WTIC oil is also tracing out a bullish descending wedge. Interestingly, MACD has been diverging, rising even as oil has broken down to new lows. Oversold can stay oversold for a long time, but it is still worth noting the stochastic is approaching oversold levels. 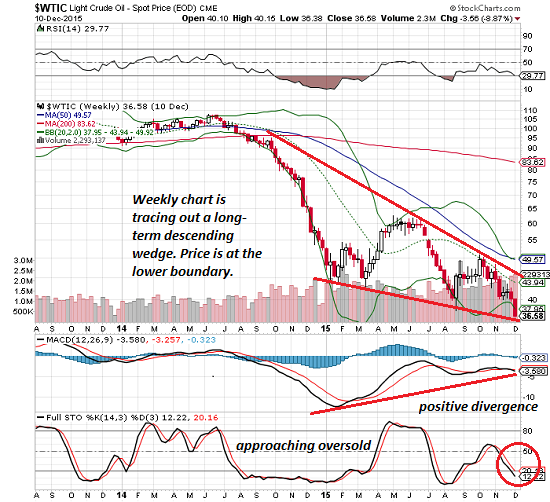 One way to assess if an asset or commodity is at an extreme is to compare its price with the price of gold and oil. Over the long-term, these ratios tend to revert to the mean.

Consider this chart of the gold-oil ratio: it is now pushing 30, which means one ounce of gold buys 30 barrels of oil. 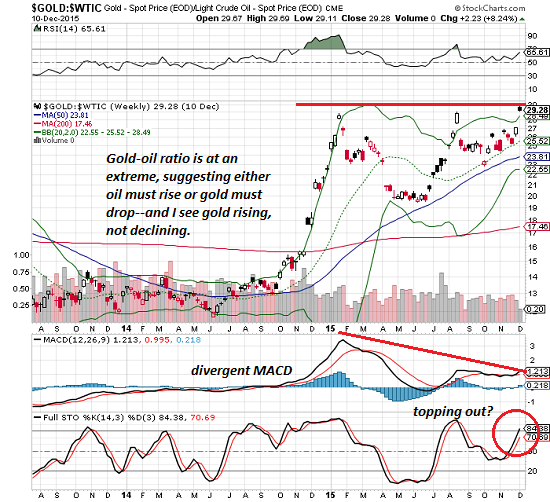 You can see that typically the ratio is between 10 and 20. When oil was almost $150/barrel, the ratio sank near 7–an extreme at the other end of the scale.

What would it take for the ratio to return to 15? Either oil must rise or gold must drop significantly. In a world in which phantom collateral and phantom assets are vanishing before our eyes, I don’t see gold declining much–rather, I see its current basing phase as setting up a long-term upward bias.

If gold doesn’t drop significantly, the only way the ratio can resume its historical average is for oil to go back up to $60-$70/barrel or more. This looks “impossible” at the moment, but if the gol-oil ratio has any relevance, it’s something to leave in the realm of the possible.

My new book is in the top 10 of Amazon’s category of international economics: [amazon text=A Radically Beneficial World: Automation, Technology and Creating Jobs for All&asin=1517160960].