For many, spiders are the stuff of nightmares: creepy, crawly, sinister creatures that sneak into homes and lurk about in the night. The fear of spiders is called arachnophobia, and it is one of the top ten phobias experienced around the world.

In reality, most spiders do not pose a threat to humans. While the majority of the 20,000 species found in the United States ARE venomous, most spiders only bite in self-defense and cannot penetrate human skin. Even then, most spiders aren’t capable of injecting enough venom to warrant medical intervention and of those that can, fatal cases are rare.

Spiders are quite useful to have around because they eat other household pests – many of which do cause some risks to humans via disease transmission (including flies, roaches, mosquitoes, and fleas).

There’s nothing wrong with sharing your home with a few spiders if you are able to identify them and are certain they are not one of the dangerous species that reside in your region of the world. However, experts generally agree that it is best to avoid touching them, because many will bite if they feel threatened or endangered.

Spider venom causes reactions that differ from spider to spider and person to person. Symptoms of a spider bite may include a stinging sensation, red mark, localized swelling or an injury requiring hospitalization.

Even though the odds of being bitten by one of the eight-legged critters is fairly low, it doesn’t hurt to learn to recognize bites and learn how to treat them.

One of the most notorious venomous spiders in the US is the brown recluse. These spiders are established in 15 states: Alabama, Arkansas, Georgia, Illinois, Indiana, Iowa, Kansas, Kentucky, Louisiana, Mississippi, Missouri, Ohio, Oklahoma, Tennessee, and Texas. In addition, isolated occurrences have been reported in Arizona, California, the District of Columbia, Florida, North Carolina, New Jersey, Pennsylvania, Washington, and Wyoming.

Other spiders look very similar to the brown recluse, so learning to properly identify this species is important. They are chocolate brown in color, and their bodies are about 9 millimeters in length with long legs. They have three pairs of eyes, arranged in a triad, and have a violin-shaped marking on the cephalothorax. The body of the “violin” is near the eyes and the neck of the “violin” extends backward, ending before the abdomen. Males and females are similar in appearance.

In his article Identifying and Misidentifying the Brown Recluse Spider, Richard Vetter explains circumstances that may lead to a bite from a brown recluse:

Recluses typically bite when they are trapped between flesh and another surface, as when a sleeping human rolls over on a prowling spider, or when putting on clothing or shoes containing spiders. Ways to reduce bite risk from recluse spiders include: 1) keep beds away from walls; remove bed skirts and items under the bed so that the only pathway to the bed is up the legs. 2) Keep clothing off the floor; if it is on the floor, shake it vigorously before dressing. 3) Store all intermittently used items such as gardening clothing, baseball mitts or roller skates in spider-proof boxes or bags.

The initial bite may be painless, but a mild stinging sensation may be felt. Gradually the area will itch, hurt, and turn red. Within eight hours, red rings form around a white center. Called a “bull’s eye” or “target lesion,” this bite can blister and grow progressively worse without treatment. The brown recluse’s venom includes a neurotoxic component, but the main concern is its necrotic or cytotoxic properties, which cause it to destroy the tissue where it is injected. Fever, chills, and headache may also be present.

There is no antidote for a brown recluse bite, but treatment can encourage faster healing. Do not apply heat or steroid cream to the area. Instead, follow these guidelines for home care:

The most effective way to treat a Brown Recluse spider bite is to draw the venom out of your skin via absorption with activated carbon (charcoal).

Here, Andrew from Survival Blog explains how to use charcoal to treat a bite: 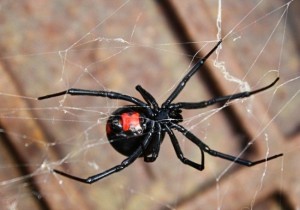 Black widows spiders are considered the most venomous spider in North America, and are found throughout the US. They are usually found in outdoor structures like fences, rock piles, sheds and outdoor furniture. In cold weather they may enter buildings. They build irregular, funnel-like webs.

The neurotoxin of these spiders is, by volume, considered among the most toxic produced in nature, and by volume is more toxic than most snake venom. It is 15 times more virulent than that of the prairie rattlesnake.  A black widow can control the volume of poison it injects into its prey with a given bite, adjusting the amount according to prey size.

Black widow spider bites are fairly easy to detect. Victims will usually feel a pin prick the instant that they are bitten. The pain will quickly spread throughout the body and will reach the arms, legs and chest within minutes. Symptoms including chills, violent vomiting, abdominal cramps and difficulty breathing will typically manifest themselves rather quickly. In severe cases, nausea, vomiting, fainting, dizziness, chest pain, and respiratory issues may follow. Young children and the elderly are more susceptible to severe reactions and in some cases, emergency medical care is necessary.

Home care for a black widow bite is the same as the guidelines for brown recluse bites: wash the area, apply ice, elevate the area if possible, and remain calm.

If a black widow bite victim is pregnant, has high blood pressure, is very young or elderly, or experiences trouble breathing, emergency care is necessary. Medicine to counteract black widow spider venom (antivenom) is available in the United States, Mexico, and Canada, but it is usually reserved for potentially life-threatening cases.

Also known as “aggressive house spiders”, hobo spiders are found in the Pacific Northwest region of the US. They create funnel-shaped webs like black widows and resemble many other common spiders.

Hobo spiders were once believed to be among the three most dangerous spiders in the US, but experts say their bite is not nearly as risky as those of the brown recluse or black widow. However, attention to any bite is important.  The bite of a hobo spider usually produces an initial mild prickling sensation. Within 30 minutes, a small hard area with a surrounding red area of two to six inches in diameter develops. Blistering usually occurs between 15 and 35 hours after the bite. The blisters normally break and ooze about 24 hours later, and a scab forms. Headaches are a common symptom.

In most cases, washing the area and applying ice is sufficient treatment, but more severe symptoms may require medical treatment.

As with most health-related issues, an ounce of prevention is worth a pound of cure. There are things you can do to reduce the risk of being chomped on by an arachnid:

Essential oil sprays can be used to repel spiders from your home. Try this formula fromEveryday Roots if you have found webs around your house:

Put 5-7 drops of peppermint oil in a spray bottle (about 16 ounces is good), and fill mostly to the top with warm water. Add a squirt of dish soap, place the top on, and give the mixture a good shake. Before using, use the hose attachment of your vacuum to suck up any egg sacs or old webs. Test on an inconspicuous area, and then spray in the corners of window frames, along door cracks, or in dark dingy places spiders may be hiding out. You can also add a dash of white vinegar to the mixture, but keep in mind this could affect some fabrics and surfaces.

Avoiding spider bites is always the best option, but that isn’t always possible. Learning to recognize bites and knowing which course of action to take in the event of a bite is important.