In large part, the American people have been conquered through the principle of groupthink. Throughout history, groupthink has played a prominent role in coercing the public of any nation into going to war for the benefit of the elite ruling class and their financial bottom line.

Groupthink is a term coined by social psychologist Irving Janis in 1972, and it occurs when a group makes faulty decisions because group pressures lead to a deterioration of “mental efficiency, reality testing, and moral judgment”.

Groups affected by groupthink ignore alternatives and tend to take irrational actions that dehumanize other groups. A group is especially vulnerable to groupthink (e.g. Neocons and the Iraq War, radical Muslim elements within the government and the coming great American purge followed by WW III) when its members are similar in background, when the group is insulated from outside opinions, and when there are no clear rules for decision making.

It is the premise of this article that groupthink is being used to “nudge” Americans into accepting a new paradigm which is suicidal for the country’s continued existence.

The Meat and Potatoes of Groupthink

In his book, Victims of Groupthink, Dr. Janis has documented eight symptoms of groupthink:

Examples of the Fallacy of Groupthink

Historians often point to examples of groupthink “fiascoes”. Dr. Janis offers as examples“the US failures to anticipate the attack on Pearl Harbor, the Bay of Pigs invasion, the escalation of Vietnam War, and the ill-fated hostage rescue in Iran”. Certainly, the flawed policies enacted in conducting the wars in Iraq and Afghanistan are prime examples of this erroneous thinking brought about by the eight elements of group think. And this flawed thinking has led to the rise of ISIS, with the help of the CIA.

History commands to not forget the Holocaust, Rwanda, Mao’s purge in China and on and on it goes. 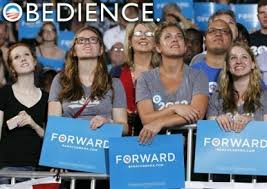 With every journalist ISIS beheads and with every staged terror attack upon American interests, the American people are being readied for war and the invocation of groupthink is the prime method of mental subjugation of our people. Many of you reading these words are going to become victims to what is coming.

The elite use such organizations as Tavistock Institute to devise public policy reflective of these psychological tools of manipulation.

Any organizing principle of war states that you must first neutralize the command and control structure over the enemy. This is why, whenever we invade a country, we first take out their radar and communications ability. This is one of the approaches that we need to employ in neutralizing the hold the globalists have over our minds. To do that, we only need to follow Jim Marrs’ advice and turn off the TV. Collapse the major instrument of control that our enemies employ against us, namely, the control over our minds through the mainstream media.

If CNN and FOX were to disappear, we would stop being conditioned on what to think and begin thinking for ourselves. Subsequently, the veil of deception would be removed from over our eyes. The sheep would lose their media based shepherd and the sheep would be forced to find their own way in life. The resulting paradigm could lead to a global awakening and, other than the return of Jesus, this would constitute the worst nightmare for the globalists.

Throughout my academic career, I have immersed myself in discovering how change occurs. Why do some movements take hold and win the day, while others die on the vine? The answer, coming from the field of social psychology, is surprisingly simple.

The flip side of groupthink also exists. The antidote to group think is more groupthink in the form of presenting a groupthink psychology that is the antithesis of the existing paradigm being perpetrated today.

Scientists from the prestigious Rensselaer Polytechnic Institute have determined that if just 10% of any given population holds to an unshakable idea, that the idea will become adopted by the majority of the country. However, the scientists who belong to the Social Cognitive Networks Academic Research Center (SCNARC) found that if the ideas are shared by less than 10% of the population, the idea will not progress and will eventually die out. The research was first published in a peer reviewed E Journal in an article entitled “Social consensus through the influence of committed minorities.”

Computational and analytical methods were used to discover the tipping point where an obscure idea eventually becomes the majority opinion. The finding has dramatic implications for those of us trying to wake up the sheep in this country.

The SNARC scientists found that the 10% figure was applicable whether they were talking about the spread of innovations or to advance an ideal.

Reaching 10% of the population should be the objective of the alternative media and the primary goal should be the preservation of the soul and not to be quite as focused on achieving physical victory in this realm of existence.

As previously stated, in order to wake up 10% of the population, the country would have to turn off the biggest propaganda device in the country, the television. Nature abhors a vacuum and if people were not watching television, they would begin to think for themselves, instead of being told what to think. If the 10% factor were to ever be reached, it would constitute groupthink in reverse.

There is no question that untold numbers of people are beginning to question the motives and actions of the government. And increasingly, these awakening sheep, are looking to us in the independent media for answers. The 64 million dollar question has to do with whether America will reach the 10% threshold in time to make any real difference?

If I can invoke the research of SNARC, don’t you think that the elite, with their vast resources already know the parameters of groupthink? Of course they do, they are using these principles against humanity in the here and now.

I am of the belief that the independent media is on the threshold of a major breakthrough and the 10% plateau will actually be achieved if even for only a short time.  I firmly believe that the 10% factor will only be achieved for a very short time. The globalists are not yet ready to completely subjugate the planet. However, they do have failsafe positions which they will resort to if the trend curve of their movement is being thwarted by an awakening population. What are these failsafe strategies? World War III comes quickly to mind. One has to simply create a false flag, blame the next terrorist group and go to war in order to perpetuate the threat. Groupthink is invoked and history repeats itself, again. The globalists have even a more virulent failsafe position in the form of a biological attack upon the people of the United States. A widespread biological attack would quickly reverse the momentum of any social movement against globalist tyranny.

Regardless, the only weapon that humanity has at it disposal in the moment, is to awaken as many people as possible.

Contributed by Dave Hodges of the Common Sense Show.