Canadian scientists have determined that if genetically modified salmon get into the wild, they will breed with wild fish and pass on their modified genes. The study also showed that the mutant offspring proved to be more aggressive than both the GM salmon and the wild fish.

The study published today in the Proceedings of the Royal Society is the first of its kind to demonstrate environmental impacts of hybridization between a GM animal and a closely related species.

What’s most interesting about this study is that the GM hybrids outperformed the original GM salmon as well as the wild trout.

Dr Darek Moreau, from the Memorial University of Newfoundland, Canada, who conducted the study told the BBC : “[Under hatchery conditions] the transgenic hybrids grew faster than the wild salmon, wild trout and wild-type hybrids. The GM hybrids also outgrew the GM salmon.”

The mutant hybrids turned out to be more aggressive feeders than the GM salmon and wild trout leading the researcher Dr. Moreau to determine the growth rate “was likely a result of competition for limited food resources.”
Genetically modified salmon would be the first transgenic animal to be allowed for human consumption, which is in the final stages of FDA approval. But many fear exactly what this study shows, that the engineered gene will mutate into nature. 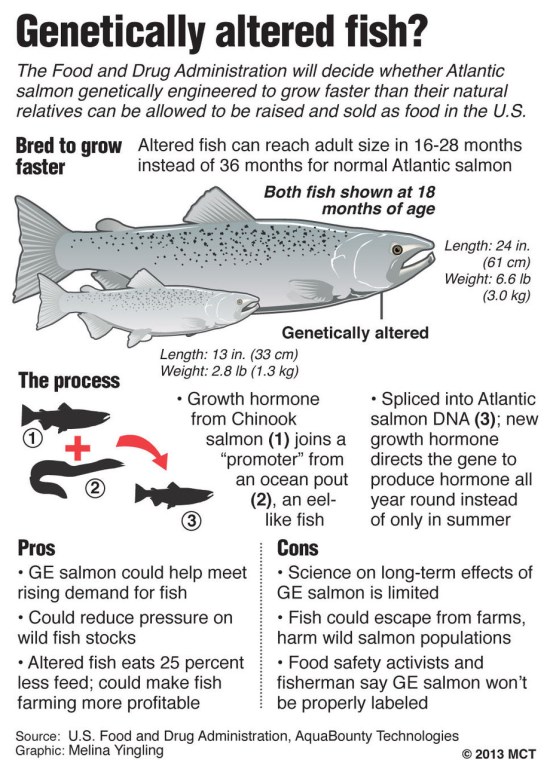 Yet, AquaBounty, who filed for FDA approval of GM salmon, says there is no way this could happen because their fish are not only engineered to grow abnormally fast but also to be sterile.”

AquaBounty has stipulated that we will market only sterile, all female AquAdvantage salmon,” said  CEO Ron Stotish.

The bigger concern for opponents of GM salmon is that once the door is opened for genetically modified livestock, more mutant species will land on the dinner plates without studies as to how they may affect human health.

If we are what we eat, what will eating sterile fish and crops from sterile “terminator” seeds do to human reproduction?

Contributed by Natural Blaze of NaturalBlaze.com.

Continue Reading
You may also like...
Related Topics:GMO, mutant, salmon