by Mike Adams, the Health Ranger

A proposed law on the verge of approval by the Belgium parliament would allow children to decide for themselves whether they should be euthanized (“killed”) by medical personnel. Currently, Belgian law limits euthanasia to persons 18 and older, but with the rise of autistic children thanks to biopesticides, GMOs and vaccines, nations are increasingly trying to figure out what to do with all these children who have been permanently damaged by the medical and biotech industries.

The answer, of course, is to simply kill them. It’s difficult to kill children off under current law without being charged with murder, however. So this proposed new law would allow doctors to decide whether children of any age (yes, even a five-year-old) can, themselves, “consent” to being euthanized without parental consent.

The mercy killing of autistic children has already begun in the UK, by the way. As the Daily Mail reports: “Desperate mother and godmother ‘killed severely autistic boy, 14, by stabbing him multiple times in the chest’ when they became overwhelmed caring for him 24/7 after demanding he be removed from the hospital and in put in their care.”

Not surprisingly, this “mercy killing” bill was introduced by the socialist party, since socialists tend to hate humanity no matter what country they live in. The proposed legislation calls for, “the law to be extended to minors if they are capable of discernment or affected by an incurable illness or suffering that we cannot alleviate,” reports AFP.

That story goes on to report, “Socialist Senator Philippe Mahoux, who helped draft the proposed changes, said there had been cases of adolescents who ‘had the capacity to decide’ their future.”

Because, of course, a six-year-old isn’t old enough to drive a car or buy a beer, but they can certainly consent to being killed by the state… especially if they’re already a burden on health care costs.

As the law proponents claim, it “marks a turning point in the nation’s approach to the rights of young people, some of whom would be able to choose to die if the law were to pass, even while still being legally barred from driving, marrying, voting or drinking liquor until they turned 18,” reports IBtimes.com 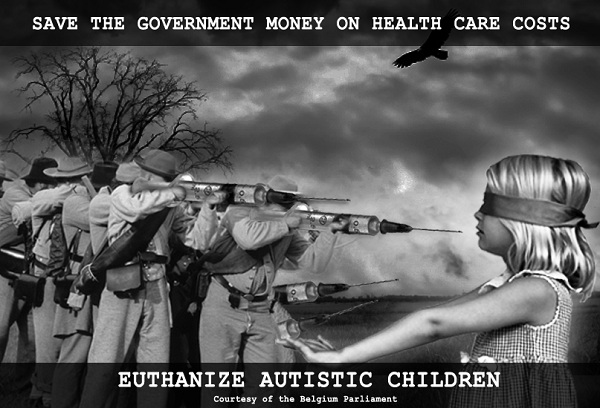 But wait, there’s more! It’s not just children who will be euthanized under this new law, it’s also scores of Alzheimer’s patients.

Euthanasia is, of course, the most convenient way for any government to get rid of people it doesn’t want to care for. Instead of teaching the public how to prevent and reverse Alzheimer’s disease, the government simply passes a new law to murder them all while calling it “compassionate medicine.”

The age of mass murder by government is upon us. It won’t be long before such laws spread to other nations and are expanded to people with “mental health problems” or even cancer. While in theory the idea of euthanasia may have merit in a strictly limited scope, the truth is that governments are now jumping on the euthanasia bandwagon to provide attempted legal justification for the mass murder of children and senior citizens whom they no longer wish to support with health care expenditures. Save the government from bankruptcy! Have grandma euthanized! (Right alongside little autistic Johnny, too…)

Governments, after all, are ultimately political machines of death and destruction, which explains why all the wars fought in the 20th century were started by governments, not the People. War is simply another way to accomplish the mass killing that the twisted, demented people at the top of every government truly enjoy.

Sick? You bet it is. We’re talking about the state-sponsored murder of children here. There’s nothing polite about it. You can also bet this will become the new way that governments dispose of autistic children and then claim rates of autism are “going down” because not as many children have it anymore. (Yeah, after they’ve all been euthanized.)

Governments, you see, will even resort to the mass murder of children to protect the vaccine industry. And what is the vaccine industry other than a child-killing monstrosity to begin with? That’s why the industry loves to run dangerous vaccine experiments on little children, too. There’s nothing quite as rewarding to these vaccine pushers as seeing a high-IQ child turned into a drooling, screaming, zombified autism case in the hours after receiving a vaccine injection.

God help us all. We are all being mass murdered by the fascist global state, and most of the population is too dumbed-down to realize what’s happening.