A World Bank analysis of the economic impact of Ebola on national economies suggests that only a minimal outbreak of the virus could very well devastate the United States and its economic interests.

Economic Consequences of the Perceived Threat of Ebola

There are two dominant theories related to the present Ebola crisis. One theory states that the media and certain government sponsored agencies such as the CDC, NIH and the FDA are hyping the Ebola crisis to promote the roll-out of mandatory vaccines. This notion promotes the belief that Ebola will not impact that many people but the fear being promoted will drive people to help people like Bill Gates make a fortune from the inevitable vaccines that  will follow this crisis. The theory certainly has merit. 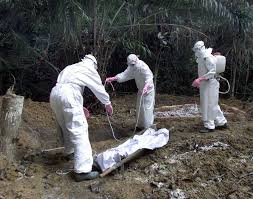 The second theory postulates that Ebola will serve as a depopulation instrument AND the elite (e.g. Bill Gates) will make money on the demise of much of humanity through the implementation ofmandatory vaccines, while Ebola rips through the population claiming millions of lives.

This second theory also proposes that the super-elite need not worry about succumbing to Ebolabecause of the fact that there are at least two vaccines and one vaccine, the 2006 human-tested Crucell vaccine, is being withheld from the public and is not being reported on in the media despite a paper trail pointing to its existence and possible efficacy as atreatment agent in the fight against Ebola. This fact has given rise to the possibility that the Crucell vaccine is effective, but the majority of the population will be receiving the hastily prepared and subsequently dangerous GSK vaccine. On the surface, this would seem like crazy thinking. However, it is actually very logical thinking because the Obama administration refuses to shut down air travel from West Africa or to shut down our porous border while trying to prevent the possibility of bioterrorism involving Ebola. Any prudent person would shut down the entry points of Ebola into the U.S. Therefore, we need to be asking what does the Obama administration know that the rest of us do not?

Which of the two theories is true? In terms of economic collapse, it does not matter which is true because either scenario will result in economic devastation.

The globalists are already warning the world about what lies ahead. On October 8, 2014, the World Bank warned about economic consequences of Ebola outbreaks on West African economies.

“With Ebola’s potential to inflict massive economic costs on Guinea, Liberia, and Sierra Leone and the rest of their neighbors in West Africa, the international community must find ways to get past logistical roadblocks and bring in more doctors and trained medical staff, more hospital beds, and more health and development support to help stop Ebola in its tracks,” says Jim Yong Kim, the President of the World Bank Group.

In fact, the World Bank has published an economic analysis and a series of projections regarding the impacted Ebola countries in West AfricaEbola’s Critical Mass Impact On the U.S. Economy

What is the threshold of GDP loss that a country like the United States can endure before the wheels come off of the economy? In other words, how much of a percentage impact would Ebola have to have on the economy to devastate most businesses? Recently, the Washington Post published figures which set the historical average profit margin for a U.S. business at 4.6%. This means that if the spin-off effects of Ebola exceeds a 5% impact on the economy, the wheels will quickly come off the U.S. economy. Business failures will lead to a Stock Market collapse. Because the Glass-Steagall Act was repealed under Clinton, the Banks would be the next to fail  because they are recklessly tied to  underwriting and insuring many investment events in the Stock Market and individual savings and retirement accounts would disappear as well when the banks collapse.

Quickly, the country would fall into chaos. As widespread as the cascading economic collapse would become, no amount of martial law would contain the chaos.

Some are wondering why Liberia was chosen to illustrate the economic impact of Ebola and what this could potentially mean to the United States economy? Sierra Leone and Guinea have very primitive economies compared to Liberia, therefore, the impact of Ebola on their respective economies would be insignificant as a basis of comparison to the United States. To some extent, a Liberian comparison is invalid on its face because the Liberians do not have anything close to a 3,000 mile salad. In Liberia, there is virtually no “Just In Time” (JIT) delivery which forms the backbone of our service economy here in the United States. However, the Liberian numbers give us some idea of what we could expect in the U.S. when Ebola gains a foothold.

Since the economy of the United States is based upon JIT and our economic institutions are considerably more well-integrated and intertwined than they are in Liberia, what do you suppose would be the low, medium and high impact on the United States? Undeniably, the impact of Ebola as a factor of economic devastation would be catastrophically higher. The social consequences are devastatingly higher as well because a lower percentage of Americans are able to provide their own food supply as compared to Liberia. There are no numbers that I can point to with regard to the low, medium and high impact effect of Ebola on the U.S. economy except to say that any analysis would place the percentage of impact at a far higher rate than the World Bank projections listed for Liberia. It is safe to conclude that even a low impact effect of Ebola on the U.S. economy would exceed the 5% threshold.

When Going Out In Public Becomes Too Much of a Risk

As any politician, sociologist or policeman will tell you that the fabric that holds society together is voluntary conformity and trust. Most Americans obey most laws because we understand the importance of societal cooperation as opposed to the dangers of living in a state of anarchy. The other factor that binds society together is trust. One of the key elements of trust in America is that our citizens trust the fact that it is safe to go out in public. And going out in public is where much of America’s economic business is conducted (i.e. restaurants, movie theaters, shopping malls, football games, concerts, etc.).

Mike Adams, appearing as a guest on The Common Sense Show on October 6, 2014, captured this notion when he stated that when Americans lose trust in the belief that it is safe to be in crowds, the impact on our way of life, and especially on our economy, will be catastrophic.

To illustrate just how devastating the effects can be on the economy when people lose trust in the belief that it is safe to go out in public, let’s take a look at the immediate reaction from the citizens of Dallas when only one Ebola case, Thomas Duncan, surfaced in the city.

When it was announced that Thomas Duncan had contact with some Dallas school children, we saw the immediate impact as Dallas moms began to keep their children home from school. Officials in Louisiana refused to receive Thomas Duncan’s property. Subsequently, and according to the AP and Veolia North America, Duncan’s effects were disposed of in drums taken from a Dallas apartment where Duncan became ill, and were burned at the company’s incinerator in Port Arthur., TX.

It does not matter what I write or what someone broadcasts on their talk show about  Ebola, once people perceive there is a threat, even a low-level threat, posed by someone like Thomas Duncan, the people will panic. Rationality will not be part of the decision making process. Fear will take over.

How long would police, fire, EMT personnel, hospital personnel, people that service our water supplies and the doctors that service our infirm, stay on the job following an Ebola outbreak? An examination of this question, by using Hurricane Katrina, as a comparison, tells us that by the third day, virtually all essential  services would be seriously compromised because of personnel defections. In this scenario, how would chronically ill people receive their medications? How would people get emergency appendectomies or other emergency medical procedures?  There will be no “911, what’s your emergency”? The factors that bind society together will quickly unravel  as Ebola spreads even on a relatively low level of impact.

What can you do to prepare if the economy collapses because of the economic impact of Ebola?

Contributed by Dave Hodges of The Common Sense show.