After having been shoved down the throats of Americans despite a massive effort by the public to stop it, Obamacare has already shown its true colors. From the near impossibility of signing up via the much touted healthcare.gov web site to skyrocketing insurance costs for working Americans, everything about the new legislation, ironically dubbed the Patient Affordable Care Act, has been a complete failure.

And it’s not just insurees and patients who are at wits end. Joining the non-compliance movement against a government hell-bent on controlling every aspect of Americans’ live, doctors across the country are starting to stand up against the new mandates.

President Obama, Congress, and the insurance companies likely figured they’d have the support of America’s medical community, but if the following letter from Dr. Kristin Held (pictured)  to insurance provider Aetna is any indication, the nation’s health care system could well be on the brink of disaster.

We know that the new law is a horrific example of government ineptitude and its unceasing intervention into every aspect of our lives. But, after you read the following letter in which Dr. Held adamantly opposes providing care under the new mandates and refuses to do so on rational and moral grounds, one can’t help but wonder how bad Obamacare must really be for our medical providers.

Like many of those who refuse to comply with the new Supreme Court approved mandated “tax,” Dr. Held has taken a similar stance.

I will not comply…

The following letter to Aetna from Dr. Held has been reprinted in full.

With a deep sense of sadness, I must inform you that I will no longer serve as a physician for Aetna patients under the terms of our contractual agreement, which you most recently unilaterally changed.

I have been privileged and honored to care for thousands of patients covered by Aetna policies since the 1990’s. I have devoted my life to providing the very best, state-of-the-art care to these individuals. We have formed a patient-doctor relationship, which I hope many will chose to continue in spite of my severing ties with Aetna. You see, health insurance has evolved such that insurers and government have inserted themselves smack-dab in the middle of the once sacred patient-doctor relationship. I am called a provider- not a doctor. My patient is now yours- not mine. What I can do as a physician now has strangulating strings and nonsensical numbers attached- to you and government and money-not the best interests of the patients.

Obamacare, the “law of the land”, contains ever-changing-at-the-whim-of-HHS, politically-expedient mandates, rewards, penalties, rules and regulations with which I cannot rationally or morally treat my patients and run a practice, much-less interpret, implement, or comply.

Millions of Americans have lost coverage because of the healthcare law and must now shop on a defective, insecure government website and sign up for more expensive policies through Federal and State exchanges. Only by logging in as a prospective patient did my office manager and I discover that Aetna was selling plans for which I am a provider-effectively selling my services without even asking, much less informing  me that my services would be sold on such a site, under the auspices of new terms with which I will not comply.

Then, after the fact, I received a form letter informing me of Aetna’s “new allowables”. I will not sell my services under such terms. While treated as such, patients and doctors are not commodities worthy of such impersonal, inconsiderate, and cavalier treatment. We choose dignity and personal service over disrespect and form letters.

So here we are, you are getting new business offering health insurance plans featuring my services without my consent under terms which are unacceptable to me. Accept this as my official written notice that the changes that you have unilaterally made to our contract are unacceptable to me and make our contract null and void.  You must explain this to your patients. You must tell them that they have purchased a product that was misrepresented to them and that you cannot deliver. It saddens me to think of the decreased access to care from actual physicians and the shockingly increased costs Aetna patients will now experience because of your choice to collude with big government rather than collaborate with patients and physicians.

Her letter has been well received by patients AND the medical community, with other doctors and nurses taking to social media to lend their support.

@kksheld @rjames1928 Some of us Docs are being dropped against our will. Patients will suffer. Obama is ignoring the pain.

@kksheld Breathless…I don’t know what to say, this was magnificent. Know one nurse is behind the docs all the way. Thank you Ma’am.

Aetna, however, was none too pleased. In response to Dr. Held’s letter, Aetna advised that Dr. Held would be required to provide services through 2015 under a contractual agreement signed with the company.

However, as Dr. Held and others had noted, because Obamacare and Aetna essentially re-wrote the provisions of the contract itself when the new mandates became law, it is null and void.

In addition to the current failures being experienced by the health care system and the rejection of the mandates by patients and doctors alike, the economic feasibility of the Patient Affordable Care Act has been called into question.

The system itself is designed to work in similar fashion to a Ponzi Scheme where the ability to remain solvent depends on money coming in from others who have been duped by the scam. Obamacare’s active participants are woefully below the government’s expectations. According to recent analysis on the financial and economic side of the law, unless we see millions of new patients (especially those between ages 20 and 30) sign up in the next several months we could well experience an instantaneous collapse of America’s entire health care system within one year due to lack of funding:

The President and other supporters of the legislation can pretend that Obamacare is working. 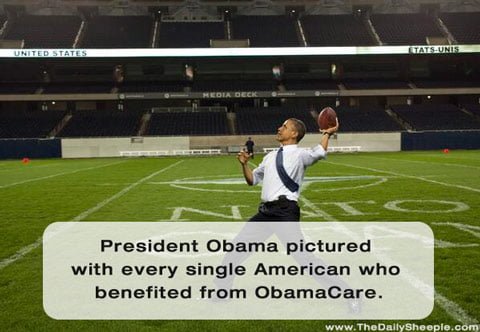