What will replace the current system after it self-destructs? That’s the question.

You know those disclosures on your credit card statements? That it will take 27 years to pay off your balance if you only make the minimum payment each month, and so on?

You might not be aware of it, but America’s “credit card”–our national debt–comes with its own disclosure statement: 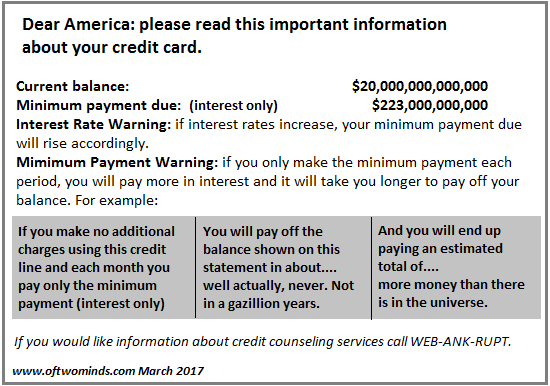 Here’s a chart of America’s credit card: clearly, any credit line expanding this fast will bankrupt the borrower, regardless of their income.

I often refer to debt serfdom, the servitude debt enforces on borrowers. The mechanism of this servitude is interest, and today I turn to two knowledgeable correspondents for explanations of the consequences of interest.

Correspondent D.L.J. explains how debt/interest is the underlying engine of rising income/wealth disparity:

Here is a table of the growth rate of the GDP.

If we use $18 trillion as the approximate GDP and a growth rate of, say, 3.5%, the total of goods and services would increase one year to the next by about $600 billion.

In other words, those receiving interest are getting 5 times more than the increase in gross economic activity.

Using your oft-referenced Pareto Principle, about 80% of the population are net payers of interest while the other 20% are net receivers of interest.

Also, keep in mind that one does not have to have an outstanding loan to be a net payer of interest. Whenever one buys a product that any part of its production was involving the cost of interest, the final product price included that interest cost. The purchase of that product had the interest cost paid by the purchaser.

Again using the Pareto concept, of the 20% who receive net interest, it can be further divided 80/20 to imply that 4% receive most (64%?) of the interest. This very fact can explain why/how the system (as it stands) produces a widening between the haves and the so-called ‘have nots’.

Longtime correspondent Harun I. explains that the serfdom imposed by debt and interest is not merely financial servitude–it is political serfdom as well:

As both of us have stated, you can create all of the money you want, however, production of real things cannot be accomplished with a keystroke.

Then there is the issue of liberty. Each Federal Reserve Note is a liability of the Fed and gives the bearer the right but not the obligation to purchase — whatever the Fed deems appropriate. How much one can purchase keeps changing base on a theory-driven experiment that has never worked. Since the Fed is nothing more than an agent of the Central State, the ability to control what the wages of its workers will purchase, is a dangerous power for any government.

If a Federal Reserve Note is a liability of the central bank, then what is the asset? The only possible answer is the nations productivity. So, in essence, an agent of the government, the central bank, most of which are privately owned (ownership is cloaked in secrecy) owns the entire productive output of free and democratic nation-states.

People who speak of liberty and democracy in such a system only delude themselves.

Then there is the solution, default. That only resolves the books, the liability of human needs remain. Bankruptcy does not resolve the residue of social misery and suffering left behind for the masses who became dependent on lofty promises (debt). These promises (debts) were based on theories that have reappeared throughout human history under different guises but have never worked.

More debt will not resolve debt. The individual’s liberty is nonexistent if he does not own his labor. A people should consider carefully the viability (arithmetical consequences) of borrowing, at interest, to consume their own production. The asset of our labor cannot simultaneously be a liability we owe to ourselves at interest.

Thank you, D.L.J. and Harun. What is the alternative to the present system of debt serfdom and rising inequality? There is none in our financialized, Neofeudal-Neocolonial State-Cartel Rentier Economy that creates and distributes credit-money at the top of the wealth-power pyramid.

As Harun noted in another email, Governments cannot reduce their debt or deficits and central banks cannot taper. Equally, they cannot perpetually borrow exponentially more. This one last bubble cannot end (but it must).

What will replace the current system after it self-destructs? That’s the question, and my answer is laid out in my book A Radically Beneficial World: a radically decentralized, transparent, opt-in system of creating money at the bottom of the wealth-power pyramid rather than at its apex.