For at least six years, law enforcement officials working on a counternarcotics program have had routine access, using subpoenas, to an enormous AT&T database that contains the records of decades of Americans’ phone calls — parallel to but covering a far longer time than the National Security Agency’s hotly disputed collection of phone call logs.

The Hemisphere Project, a partnership between federal and local drug officials and AT&T that has not previously been reported, involves an extremely close association between the government and the telecommunications giant.

To find out more check out the Los Angeles “Hemisphere Project“

The government pays AT&T to place its employees in drug-fighting units around the country. Those employees sit alongside Drug Enforcement Administration agents and local detectives and supply them with the phone data from as far back as 1987.

The project comes to light at a time of vigorous public debate over the proper limits on government surveillance and on the relationship between government agencies and communications companies. It offers the most significant look to date at the use of such large-scale data for law enforcement, rather than for national security.

The scale and longevity of the data storage appears to be unmatched by other government programs, including the N.S.A.’s gathering of phone call logs under the Patriot Act. The N.S.A. stores the data for nearly all calls in the United States, including phone numbers and time and duration of calls, for five years.

Hemisphere covers every call that passes through an AT&T switch — not just those made by AT&T customers — and includes calls dating back 26 years, according to Hemisphere training slides bearing the logo of the White House Office of National Drug Control Policy. Some four billion call records are added to the database every day, the slides say; technical specialists say a single call may generate more than one record. Unlike the N.S.A. data, the Hemisphere data includes information on the locations of callers.

Officials said four AT&T employees are now working in what is called the High Intensity Drug Trafficking Area program, which brings together D.E.A. and local investigators — two in the program’s Atlanta office and one each in Houston and Los Angeles.

The slides were given to The New York Times by Drew Hendricks, a peace activist in Port Hadlock, Wash. He said he had received the PowerPoint presentation, which is unclassified but marked “Law enforcement sensitive,” in response to a series of public information requests to West Coast police agencies.

“I’d speculate that one reason for the secrecy of the program is that it would be very hard to justify it to the public or the courts,” he said.

Mr. Jaffer said that while the database remained in AT&T’s possession, “the integration of government agents into the process means there are serious Fourth Amendment concerns.”

Are police allowed to rummage through the contents of a cell phone when a person is arrested? The U.S. Supreme Court is currently deciding whether to grant review in two cases involving the thorny issue. Together with the Center for Democracy and Technology, we’ve filed an amicus brief with the Supreme Court asking it to grant review in Riley v. California, a case involving the warrantless search of a smartphone incident to arrest.

The Fourth Amendment requires the police to get a warrant before conducting a search. But the Supreme Court has permitted police to search a person and the areas and items within the arrestee’s immediate control upon arrest without a warrant. This exception to the warrant requirement has been justified for two reasons: first, protecting officer safety means searching the person to ensure they aren’t carrying a weapon; and second, a warrantless search is justified by the need to ensure no evidence is lost or destroyed.

But this doctrine was developed by the Supreme Court in an age before cell phones. While courts have permitted the warrantless search of things like clothes or cigarette packs on a person under the exception, a modern smartphone is a far different thing, capable of storing immense amounts of information. As warrantless cell phone searches incident to arrest have become more widespread, state and federal courts reviewing the constitutionality of these searches have reached conflicting opinions. But as cell phones have evolved to become miniature computers, courts looking at the issue are hesitating to provide officers with wide searching authority. The two most recent court decisions on the issue, from the Florida Supreme Court in Smallwood v. State and the federal First Circuit Court of Appeals in United States v. Wurie, ruled such searches were not permitted especially because of the massive amounts of information stored on a smartphone.
https://www.eff.org/deeplinks/2013/08/eff-amicus-asks-supreme-court-review-warrantless-smartphone-searches

Your cell phone is revealing your location to anyone who’ll listen:

Everywhere you go, your phone is sending out signals that can be assembled to form a picture of your movements. You can’t turn them off, and companies have begun to pick them up, often without any indication that they’re doing so. As this trend develops, smartphones could spell the end of real-world privacy.

“It’ll get worse before it gets better,” mobile industry expert Chetan Sharma told NBC News. “Unless leaders step up and work on a framework that works for all consumers, it’s going keep getting worse and worse until it is unbearable.”

That prediction may sound grim, but alarming examples are mounting.

A company called Renew recently enabled the LCD-toting “smart trash bins” in London to record the unique MAC addresses — broadcasted in order to facilitate network connections — of devices in the hands or pockets of passersby.

In a single day, just a fraction of the network of smart bins collected data from nearly a million devices. By comparing when a device was in range of one bin to when it appeared at another, or for how long it stayed in range, the movements of these devices could be determined with a high degree of accuracy. All of this happened without a single person noticing — no consent, no warning, no opportunity to opt out.

The scary part is that if Renew hadn’t said anything, no one would even have known the bins were collecting all of this data. You can’t opt out of something you don’t know is happening to you.

“People are not consenting to this,” ACLU electronic privacy expert Christopher Soghoian told NBC News. “The phone doesn’t vibrate every time the store tracks them.”

“There’s a consistent, systematic violation of privacy by — I’m not going to say everyone, but a significant number of the big players,” warned Sharma.

Euclid is a technology company that, like Renew, tracks foot traffic by “sensing” smartphones. Its system, sold to retailers, not only tracks “how shoppers flow through your store” but it keeps tabs on “their visit duration, and return shopping patterns.”

The National Security Agency paid millions of dollars to cover the costs of major internet companies involved in the Prism surveillance program after a court ruled that some of the agency’s activities were unconstitutional, according to top-secret material passed to the Guardian.

The technology companies, which the NSA says includes Google, Yahoo, Microsoft and Facebook, incurred the costs to meet new certification demands in the wake of the ruling from the Foreign Intelligence Surveillance (Fisa) court. 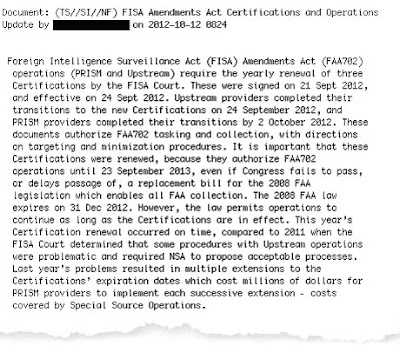 If there is anyone still wondering whether there can be any remaining privacy in the digital age with the continued existence of the third party doctrine?  The better question now might be whether the death of this doctrine at the hands of the Supreme Court, assuming it was within the realm of possibility, would change the government’s intrusion into every bit of information, data, metadata, that exists in any database, public or private.

Contributed by MassPrivateI of massprivatei.blogspot.com.