A shocking 58 percent of the state of California is now in a state of “exceptional drought,” according to the U.S. Drought Monitor. (1)

“The drought’s incredible three-year duration has nearly depleted both the state’s topsoil moisture and subsoil moisture reserves, according to Brad Rippey of the U.S. Department of Agriculture, who wrote the Drought Monitor report,” reports the Washington Post. (2)

All the usual measures are being taken to try to soften the impact of the drought: The Governor has declared a state of emergency, strict water conservation efforts are already in force, neighborhood “water cops” hand out stiff fines for excessive water usage, and people are scrambling to cut water consumption in every way possible.

These efforts, however, will not be enough. The simple, inescapable fact is that much of California is simply not sustainably inhabitable with the population densities it currently hosts. Los Angeles, in particular, is a city built in a desert and almost entirely dependent on imported water supplies for its survival.

1,140 golf courses stand as symbols of a society living in abject denial

California is a wonderful place full of amazing and fun people, but the “California lifestyle” pursued there, flat-out isn’t supportable by the climate of the region. For example, California currently hosts 1,140 golf courses. (3) Golf courses are perhaps the perfect symbol of the level of shameful denial under which so many of us Americans now live when it comes to sustainability.

Golf courses use ridiculously excessive volumes of water to create an artificial “green” playing field in the middle of dry, arid regions. While golf is a wonderful sport and a healthy way for many people to enjoy some sunshine and fresh air, the presence of massive green lawns in the middle of near-desert regions should cause any thinking person to ask, “What’s wrong with this picture?”

I do understand that golf courses practice drought conservation techniques, and they are trying to use less water. But from an environmental perspective, they shouldn’t have ever been built in most of these regions in the first place. Their very existence is a glaring declaration that “humans are idiots” when it comes to thinking long term.

California farmers are pumping away their water future

The extreme drought taking place right now is also forcing California ranchers to accelerate their siphoning of water from underground aquifers, sharply reducing the amount of water remaining in those aquifers.

This is literally the “pumping away” of your own agricultural future. Today, Californiaproduces a surprisingly high percentage of the food for America; but that production is already plummeting during this drought, and production is almost certain to collapse over the long haul as drought conditions persist.

Farm production is abundant when water is cheap and plentiful, but once the water starts to dry up, farming becomes nearly impossible. California is now facing the sobering reality that much of its agricultural production may simply not be viable anymore.

“Farmers in California have turned to groundwater to keep crops irrigated,” reports CNBC. (4) “That has led to fears of depleted groundwater in the years ahead if that continues, according to a report released earlier this month.” (Click here for the drought report from UC Davis.)

Here’s the latest drought map. All the areas in red or dark red cannot be used to grow any significant quantities of food until rainfall returns: 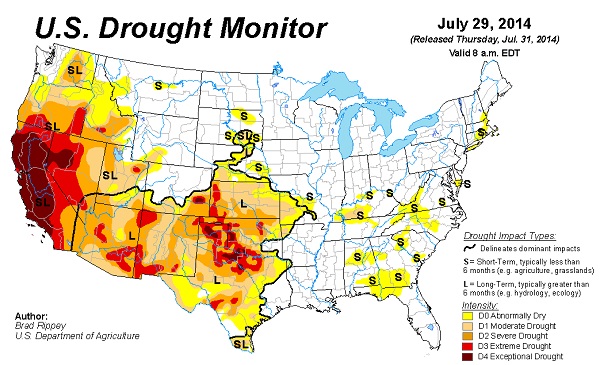 Mass migration away from California is inevitable

The inevitability of the mass migration away from California still hasn’t quite sunk in among most people who live there. Almost no one has thought about how they might afford to move out of California when the value of their own property in California will be approaching zero.

Lynn Wilson is the academic chair at Kaplan University, and she serves on the climate change delegation in the United Nations. “Civilizations in the past have had to migrate out of areas of drought,” she said in a CNBC article. (4) “We may have to migrate people out of California.”

Think about it: When the day comes that the water taps run dry across large urban areas, there will be a rush for people to sell their homes and move out of the state. But in this rush,the value of California homes will plummet to nearly nothing. Why’s that? Because the value of a home that has no running water and likelihood of ever receiving running water is very close to zero.

There will be no buyers. There will only be sellers. And after the sellers realize they cannot sell, they will simply pack up the minivan and abandon their California properties and send their homes into foreclosure.

Areas of California will become ghost towns, much like many areas of Detroit today.

That’s why the smart people are the ones trying to get out right now. The long-term reality of the water crisis hasn’t sunk in with most people, so there are still buyers of real estate in the drought areas. But smart people are doing things like selling their homes in California and moving to Colorado or Oregon where water is far more plentiful. Here in Texas, we’re getting a flood of Californians moving in, many of whom have seen the writing on the wall and are “headed East in search of water.”

Southern Oregon needs to start thinking about the coming “mass evacuation” of California, too. The problem with the evacuation is that California is largely surrounded by desert states. If you head East into Nevada, you’re in another desert where water is also scarce. Las Vegas, for example, will also become a ghost town in a matter of a few short years. That’s another inevitable reality that hasn’t been sufficiently acknowledged by its own citizens.

Arizona is also largely a desert state, with both Phoenix and Tucson facing their own water challenges in the years ahead.

To find water in the western USA, you either have to head North to Oregon and Washington or go far to the East, deep into Utah, Colorado or all the way to the Eastern half of Texas.

The current population of California is 38 million. Barring any miracle technology breakthrough in ocean water desalination, I’m guessing the state can likely only support about 10 million people in terms of a sustainable water supply. That means perhaps 28 million people will have to leave California and find homes somewhere else. They will be doing this at a time when nobody is buying their California properties, but they still owe money to the banks on those properties.

The net result is a mass human migration wave combined with a wave of home loan defaults as homeowners abandon their properties and walk away.

The drought, you see, will ultimately lead to a banking crisis, not just a food crisis.

Sources for this article include:
(1) http://droughtmonitor.unl.edu/