Like so many of these stories that come out quietly every day in this country, another farmer’s crops have been tainted with genetically modified organisms (GMOs).

A Washington farmer who had intended to grow non-GMO alfalfa recently had his crop rejected because it was found to contain evidence of genetically engineered pesticide resistance.

Brokers test alfalfa for a number of reasons…including the protein content for a crop that serves to feed livestock. That’s when the broker discovered the alfalfa was genetically modified.

The farmer contacted the Agriculture Department in late August, and tests began after Labor Day. The department has not identified the farmer. Pesticide-resistant alfalfa was developed by Monsanto Co. and has been licensed to several companies.

The alfalfa in question tested and a “low-level presence” of GM alfalfa was found that had been modified to withstand Monsanto’s best-selling pesticide glyphosate, known commercially as Round-Up. In a statement, Monsanto defended the contamination with the argument that a low-level presence is legally permitted:

“The potential presence of impurities is clearly stated on the label. If growers are growing alfalfa for sensitive markets and want to purchase seed with non-detectable presence of GM traits, such seed is available in the marketplace.’’

Monsanto isn’t just a chemical company that is supplying 40% or more of the world’s food, but apparently it is also a wordsmith company that has, through its science experiments, effectively changed the definition of the word “pure”.

If someone can explain the logic behind ‘purity standards allow impurities,’ please let me know.

If a low-level presence of GMO seeds are allowed in supposedly conventional seed products, just consider the ramifications of how far-reaching GMO actually is across this country and the rest of the world. As Truthstream Media has previously reported, GMO is linked to colony collapse disorder, superpests, superweeds and a multitude of health problems in independent studies ranging from gut disorders to cancers to infertility.

Natural News has reported on how GMO seeds have become a trap that takes control of farms through price hikes, continued use of more and more pesticides as pests acquire resistance over time, and contamination. GMO seeds have driven up the price of conventional seed and, in an effort to keep in step with Big Agra giants like Monsanto that patent their seeds for one-time use, conventional seed companies have also adopted clauses that farmers cannot save and reuse seeds for future seasons.

The products of Monsanto and its ilk are so widespread by now, many farmers have just given up attempting to grow conventional seed. Natural News goes on to report that a GMO sugarbeet and soybean farmer from North Dakota stopped trying to grow non-GMO, stating, “It was getting down to the point where about 50 percent of our loads were being rejected because of contamination, and we couldn’t buy seed that was pure without contamination.”

Then there are reports that, ever-so-conveniently, a Monsanto seed truck will break down and carry Monsanto’s GMO seeds on the wind, contaminating conventional fields. When those farms are later found to be growing Monsanto’s GMO crops unbeknownst to the farmers who own them, the company sues. A commenter on this Reuters article dealing with Monsanto seed lawsuits wrote, “I think their[sic] needs to be some investigation into how Monsanto’s trucks are transporting their seeds and where their trucks ‘supposedly’ break down or run off the road.” There are reports that Monsanto’s first lawsuit happened this way.

Back in 2009, Daily Kos reported that Monsanto was coming down against seed cleaners and their clients throughout the Midwest as well, with harassing phone calls, home visits and lawsuits. Farmers reportedly overhead a Monsanto investigator laughing that it was a “rural cleansing”.

Over 90% of the corn and soy — the two crops most heavily subsidized by the U.S. government — is genetically modified at this point.

The noncompliance history posted on the U.S. Department of Agriculture’s Animal and Plant Health Inspection Service (APHIS) website gives a startling picture of just how not under control the mere testing of GMO crops are in this country, let alone the cross-pollination contamination that surely happens every single day as approved biotech crops slowly take over the nation’s fields.

The GM crop approval process in America is tantamount to little more than a government rubber stamp. All that these biotech companies have to do is create their own safety assessments and hand them over to APHIS with claims that their crop is no more of a risk to the environment than a non-genetically engineered crop. Then APHIS deregulates it, as per the organization’s website:

When a developer has collected enough evidence that a GE organism poses no more of a plant pest risk than an equivalent non-GE organism, the developer may petition APHIS to determine non-regulated status for the GE organism. If the petition is approved by APHIS, the GE organism may then be introduced into the United States without any further APHIS regulatory oversight.

The USDA does not do independent safety assessments. Thus, the GMO industry is basically regulating itself. Makes sense, right?

With the definition of “pure” irreparably damaged by biotech companies and their GMO crops, when stories like the one of the Washington farmer with a tainted alfalfa field come out quietly in small local presses, one has to wonder how many other stories like this are out there that simply never make it to a media outlet. 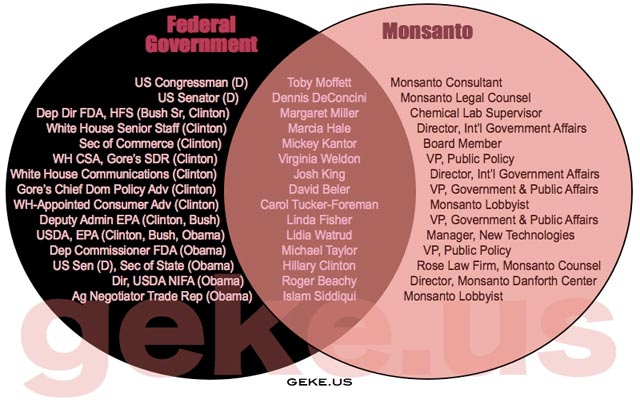 Every time I have a reason to show this revolving door diagram of our government and Monsanto, I will.

Aaron Dykes and Melissa Melton created Truthstream Media.com as an outlet to examine the news, place it in a broader context, uncover the deceptions, pierce through the fabric of illusions, grasp the underlying factors, know the real enemy, unshackle from the system, and begin to imagine the path towards taking back our lives, one step at a time, so that one day we might truly be free…

Aaron Dykes and Melissa Melton created Truthstream Media.com as an outlet to examine the news, place it in a broader context, uncover the deceptions, pierce through the fabric of illusions, grasp the underlying factors, know the real enemy, unshackle from the system, and begin to imagine the path towards taking back our lives, one step at a time, so that one day we might truly be free...