We can no longer afford the expansion of healthcare/education or their out-of-control costs.

If we strip away obscuring narratives, we can clearly see that the two employment sectors that have expanded rain or shine for decades have functioned as gigantic make-work projects. I refer of course to healthcare and education, specifically higher education. 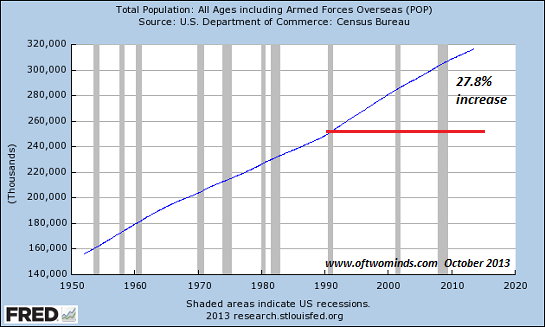 To separate out the wheat (jobs that support households) from the chaff (part-time work that cannot support a household–even a job with one hour a week is counted as a P-T job), let’s use full-time employment as a baseline. Full-time employment rose about 20% since 1990, less than population. 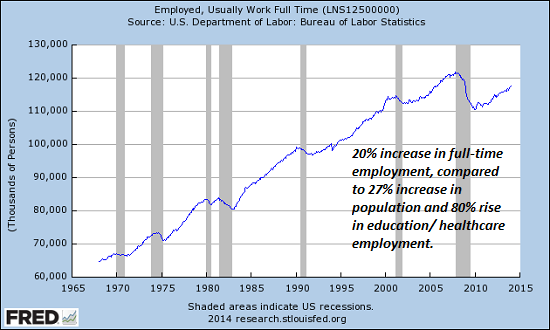 Education/healthcare employment rose by 81% since 1990–three times the population growth rate and four times the percentage increase in full-time employment. 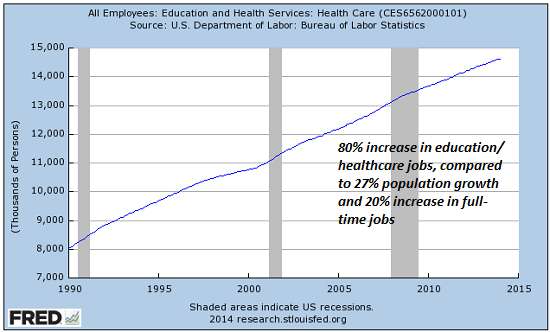 If education and healthcare had expanded to meet the needs of a larger population, employment in the sectors would have increased about 30% since 1990, not 81%. So 50% of the sectors’ expansion is above and beyond population growth.

Have education and medical services improved by 50% since 1990? In many cases, it can be argued the yield on our investments in these sectors has declined even as employment in the sectors has soared. Consider the study Academically Adrift: Limited Learning on College Campuses which concluded that “American higher education is characterized by limited or no learning for a large proportion of students.”

While student loans have soared to over $1 trillion, with direct Federal loans ballooning from $115 billion to over $700 billion in a few short years, only 37% of freshmen at four-year colleges graduate in four years (58% finally graduate in six years), and 53% of recent college graduates under the age of 25 are unemployed or doing work they could have done without going to college. 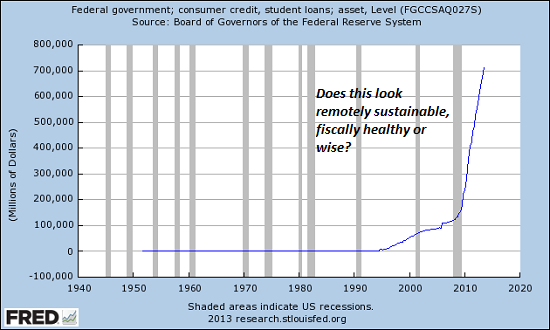 In all, from 1987 until 2011-12–the most recent academic year for which comparable figures are available—universities and colleges collectively added 517,636 administrators and professional employees, according to the analysis by the New England Center for Investigative Reporting.“There’s just a mind-boggling amount of money per student that’s being spent on administration,” said Andrew Gillen, a senior researcher at the institutes. “It raises a question of priorities.”

The number of employees in central system offices has increased six-fold since 1987, and the number of administrators in them by a factor of more than 34.

As for healthcare in the U.S.: despite soaring employment and expenditures, life expectancy in the U.S. since 1990 has fallen well below that of the United Kingdom (U.K.), a nation whose healthcare system is widely criticized in the U.S. (World Bank, Life Expectancy at Birth)

Yes, there are many metrics of overall health, but the U.S. has not experienced a 50% increase since 1990 in any of them. If anything, the overall health of the populace has arguably declined, even as the nation pours almost 20% of its gross domestic product (GDP) into healthcare.

This is not a slam on those earning a living in these sectors; it is simply a description of sectors that have functioned as “make-work” sources of jobs. Consider the appallingly perverse dynamic of student loans: now that tens of millions of students need student loans to pay sky-high tuition and fees, colleges need huge administrative staffs to manage the student loan process.

The yield (in earnings) on the increasingly unaffordable college degree is declining sharply: 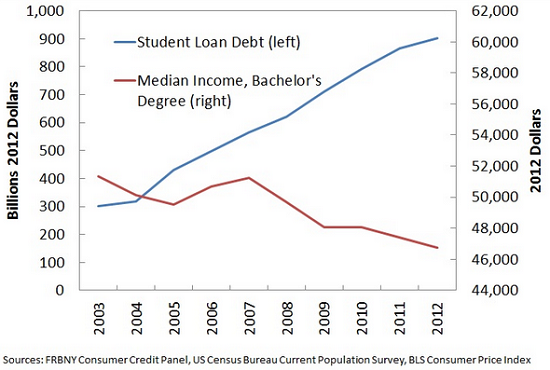 The enormous sums of money needed to pay for these make-work sectors is coming out of household incomes that are stagnating for 90% of all households. 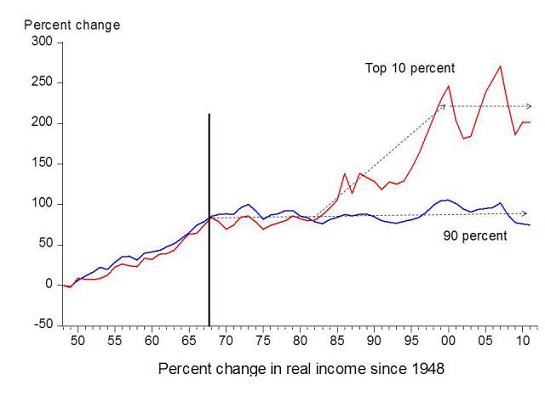 If we subtract healthcare and debt service from household earnings, we find that wages/salaries are in recession territory: 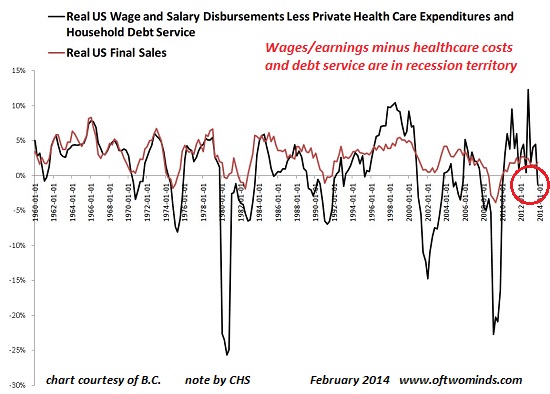 In other words, the nation can no longer support these enormous make-work sectors, where employment and expenditures rise while the yield on those gargantuan investments actually declines–a classic case of diminishing returns.

Consider the percentage of healthcare employment that is paper-shuffling resulting from America’s dysfunctional pastiche of private cartels and Federal programs; I have seen estimates of 30%, but this doesn’t include the staggering sums lost to fraud, embezzlement, over-charging, useless or even harmful procedures, duplicate or needless tests, and so on.

As I have often noted, if we compare our per-person expenses for healthcare with other advanced democracies such as Australia and Japan, we find those nations spend roughly 50% of what the U.S. spends per-person, with better and more evenly distributed results. This strongly suggests that healthcare should cost half of what it currently costs, if the U.S. sickcare system wasn’t so wasteful, ineffective and dysfunctional.

As for tuition costs: I have demonstrated in my book The Nearly Free University and The Emerging Economy: The Revolution in Higher Education that the tuition for a four-year bachelor’s degree could (and should) cost $5,000, not $100,000 or $200,000. The technology and tools already exist to accredit the student, not the institution and provide distributed courses, adaptive learning and real-world, workplace-based workshops for a tiny fraction of the ineffective, unaffordable system of higher education we are currently burdened with.

Once costs decline 95%, there is no need for student loans or the bloated bureaucracies needed to manage the parasitic student-loan system.

Why is employment in these sectors finally slowing? For the simple reason that they’ve run out of oxygen: we can no longer afford their expansion or their out-of-control costs. Much cheaper and more effective systems are within reach, if only we look past failed models and politically powerful cartels and fiefdoms.