The winds of change are blowing across America. The following events, detailed below, mark a dramatic shift in the relationship between the federal government and the people not of the federal government. We are at a definitive crossroads in history and I can scarcely believe what I am witnessing.

After reading the following accounts which have transpired in the past few days, it will become clear to the reader that we are moving into times of unprecedented change. These changes are promising and exciting, yet are very frightening. 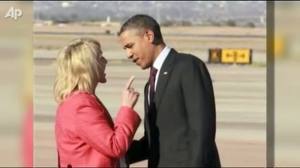 Will the country soon be following Governor Brewer’s lead?

Since the historic finger pointing encounter on the tarmac of Sky Harbor International Airport over the controversial immigration related issue of SB1070, it is no secret that Arizona Governor, Jan Brewer, and President Obama do not like each other. In fact, to say that they don’t like each other is a gross understatement.

Presently in Arizona, there are 7,000 hurting families which derive their livelihood from tourism at the Grand Canyon. Obama has ordered the shutdown of the Canyon in regard to the budget impasse.

Governor Brewer is actually considering the use of the State’s National Guard to man the Grand Canyon in defiance of the federal order which shut down the park. Arizona is awaiting Brewer’s next move as she contemplates how to stand up the tyranny emanating from Washington. 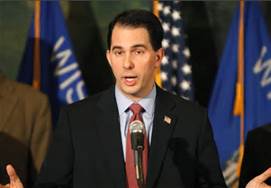 Wisconsin Governor Scott Walker said he’s not closing the federal lands to visitors, in a stunning defiance of the National Park Service’s demand to close certain areas. The federal government had specifically ordered park officials in Wisconsin to close doors on Kettle Moraine, Devil’s Lake and Interstate parks, as well as sections of Horicon Marsh. Interestingly, most of the impacted areas are actually owned by the state. 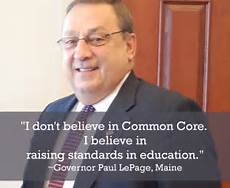 Maine Governor Paul LaPage recently signed an executive order (EO) in which the Governor declared that the public schools in Maine are locally controlled that student’s personal information will not be shared with any corporations nor any federal agencies.

Clearly, Governor LaPage is telling the federal government that Maine’s children are not the property of the misguided Obamacrats. This stunning development makes me want to move to Maine.

Average Citizens Are Getting Into the Act

John Ervin and his family were visiting Washington DC with his family and his daughter desperately wanted to see the Lincoln Memorial. John went around the barrier and went to the memorial on behalf of his daughter in an act of civil disobedience. Martha Tazzioli and her sons from Seattle, WA., also engaged in civil disobedience and circumvented the barriers to a national monument, albeit with the rangers looking the other way.

Vietnam veterans defied the shutdown orders at the Vietnam Memorial. There were reports that police ordered tourists and Vietnam War veterans who were visiting the Vietnam Veterans Memorial Wall to leave the memorial at one point this past Friday. The veterans went around the barricade until more police showed up in force, NBC’s Mark Seagraves reported. Please allow me to pause for a moment and remind everyone that these vets showed up to pay respect to their fallen friends and comrades and they were denied their right to do so by a President who kept his own federally funded golf course open. America lost over 58,000 of her finest in Vietnam and we tolerate the continual displays of disrespect for our culture, our traditions and our bravest members of society from a person like Obama? 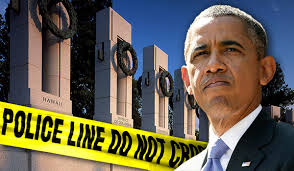 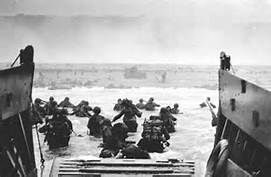 A level of commitment and sacrifice that Obama, Holder and Clinton will never know.

These brave WWII veterans stormed barricades blocking the WWII Memorial in Washington DC, just as they did when they stormed beaches at Normandy, nearly, sixty years ago. The German and the Japanese armies did not stand a chance against our amazing soldiers and neither does Obama. Take a good look at the WWII veterans pictured below, we will not have any of them for much longer. God Bless these brave men who demonstrate an understanding of what it means to be an American unlike the Kenyan pictured above whose idea of combat is trying to keep his tee shot on the fairway. 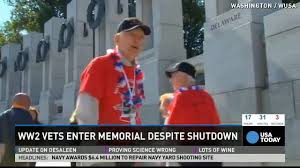 We have governors of states, brave veterans, and average people defying the federal government. What does this all of this mean? It means that the worm has turned and America is finally beginning to stand up and say no to the tyrants who comprise the minions which serve the central bankers who have hijacked our government. It means that America has just entered a major shift in its attitude towards its government. The events of civil disobedience, occurring over the past week cannot be overstated.

Part two of this series will explore this new found level of civil disobedience, which is beginning to touch many of us from our statehouses to the houses that we live in, and what it means for our collective futures. And like with most change Part two will reveal that there is both an upside and a downside to any change and this is no different. America, we live in historic times.