According to two subsequent documents put out by the World Bank, its guidelines dictate that in order to qualify for World Bank lending, sovereign nations must implement population reduction objectives as outlined by the World Bank and UN Population Fund. If they refuse, lending will be withdrawn.

Already pre-tested and implemented in Yemen and Niger, these guidelines are destined for global implementation within the next decade, says the World Bank.

As we know, this is eugenics-new-speak for population control. As pro-death globalist professor John Cleland argued at a 2006 gathering in the company of like-minded individuals from the United Nations Population Fund, the International Planned Parenthood Foundation, the European Commission, the World Bank and Bill and Melinda Gates Foundation:

“It does this cause no service at all to continue to shroud family planning in the obfuscating phrase “sexual and reproductive health”. People don’t really know what it means. If we mean family planning or contraception, we must say it. If we are worried about population growth, we must say it. We must use proper, straightforward language. I am fed up with the political correctness that daren’t say the name population stabilization, hardly dares to mention family planning or contraception out of fear that somebody is going to get offended. It is pathetic!”

The 2010 report put out by the World Bank however, chooses to use this deceptive phrase continually. And, from its dark point of view, it is right to do so- for the resistance against this 21st century eugenics grows steadily. The Bank, just like the UN, has no choice but to cloak itself in deceptive language so as not to raise too much suspicion as they move forward:
“(…) a renewed global consensus on the need to make progress on MDG5, together with greater attention to gender issues within and outside the Bank is refocusing attention on RH and offering an unprecedented opportunity to redress the neglect of the previous decade. Notable among these developments is that in 2007 the UN fully incorporated RH within the MDG framework.”

Apart from all the available evidence of a global push for population reduction, The term Global Consensus alone proves it:

“The Global Consensus”, says the report, “recognizes that MDGs 4 & 5 will not be reached without country leadership and the prioritization of reproductive, maternal, and newborn health at country level. The Global Consensus proposes a five point plan that includes: (i) political, operational, and community leadership and engagement; (ii) a package of evidence-based interventions through effective health systems along a continuum of good quality care, with a priority on quality care at birth; (iii) services for women and children free at the point of use if countries choose to provide them; (iv) skilled and motivated health workers in the right place at the right time, with supporting infrastructure, drugs, and equipment; and (v) accountability for results with robust monitoring and evaluation.”

Speaking of a global consensus. It was Klaus Töpfer, 1996 Bilderberg attendee and former Executive Director of the United Nations Environment Programme (UNEP) who in the year 2000 admitted to an “international consensus” on worldwide population control. During a speech given in Berlin in the beginning of the new millennium, Töpfer stated outright: 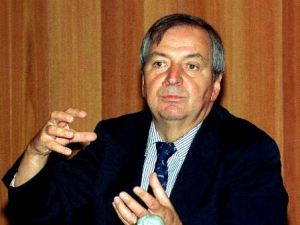 “Most people and policymakers are unaware that there is an international consensus that grounds population policy in human rights and development, emphasizing building the capacities of women to manage their own lives.”

In order to translate this international, or global consensus to the nation-states under its control, the World Bank boasts:

“The World Bank is uniquely positioned at the country level to take on advocacy for reproductive health, particularly in reaching Ministers of Finance. This will require utilizing the World Bank‟s economic analysis and technical resources to marshal arguments for investment in reproductive health. Bank’s country directors have key role to play in process of making RH a country priority through their policy dialogue with governments.”

There it is again. The World Bank- as lender- has the dependent nations in a stranglehold. If nations don’t comply with its directions, the Bank can cut the financial lifeline, no problem at all. Or, as its 1984 World Development Reportstates, the World Bank threatens nations who are slow in implementing the Bank’s “population policies” with “drastic steps, less compatible with individual choice and freedom.”

A World Bank discussion-paper from 2007 called Population Issues in the 21st century: The Role of the World Bank, explains how this process works in more detail:

“The Bank has a potential comparative advantage to address these issues at the highest levels of country policy setting, not only with ministry of health counterparts, but also with officials from finance and planning. This is important given the increasing recognition that political economy is a critical factor in the implementation of population and reproductive health programs, particularly in high-fertility countries.”

“Its involvement in many sectors in countries”, the authors continue, “can produce synergies that will allow faster progress than a more narrow focus on family planning services. The Bank will need its partners – United Nations Population Fund (UNFPA), World Health Organization (WHO), key bilaterals – to provide technical expertise and administrative knowledge in areas such as procurement of contraceptives, service delivery, and demand creation.”

The document makes clear that this global and coordinated push for total control is not some vague dream. It is already being test-cased in several developing nations. The document states two cases that are currently underway. In the first example, Niger, the World Bank already has in place so-called “benchmarks” that the nation in question has to live up to in order to enjoy the continued support of the World Bank. In the case of Niger, considered by the IMF as a “Highly Indebted Poor Country”- and therefore easy to subdue- the document states:

“Population growth is documented and a population ESW (Economic and Sector Work) planned. A national Population and Reproductive Health Strategy is not only a CAS (Country Assistance Strategy) benchmark, but also a lending trigger, while reproductive health is included in one of the CAS pillars.”

“High fertility and rapid population growth were not only acknowledged as major problems, but fertility was also used as one of the CAS performance benchmarks. Moreover, a population ESW was planned and subsequently delivered. That ESW has been most instrumental in enhancing the in-country policy dialogue on population issues, and has led to a free-standing International Development Association (IDA) population operation, currently in preparation, which is the first population-specific operation in many years in the World Bank Africa Region. The preparation of a National Population and Reproductive Health Strategy was also a CAS benchmark as well as a lending trigger, while reproductive health was included in one of the CAS pillars. Other Bank partners such as the EU have joined the effort. Finally, population issues have also been given a high priority in the new Rural and Social Policy Reform (Development Policy Lending) Credit.”

The devil is in the details. The extend to which the World Bank and UN are willing to blackmail “Highly Indebted Poor Country’s” in implementing globally coordinated population control policies also becomes obvious in the second test-case example: Yemen:

“In the lending portfolio, restructuring of the Health Sector Reform Project (which includes family planning) is proposed and is expected to lead to a Population II Project to specifically address high fertility and family planning issues. Pillars two and three address population and reproductive health. Contraception is addressed effectively, and CPR is included as a CAS indicator. Furthermore, earlier in 2006, the Bank produced a study on “Promoting the Demand for FP in Yemen.”

“High fertility and rapid population growth”, the document reads, “were not only acknowledged as major impediments to economic growth and poverty reduction, but was included as one of the specific goals that was subsequently translated into policies, programs, and an indicator (reduce population growth rate by 3 percent per annum). Moreover, budget was allocated specifically for each of the four population policies that were outlined.”

The dimensions of this “Global Consensus” are extensive. These diabolical dimensions are being described in the 2007 “Discussion Paper” with the help of the catch-phrase: “Multisectoral approach”:

“A more systematic approach to mainstream population within the core agenda (…) would greatly enhance the adoption of a truly multisectoral approach. (….) The Bank’s comparative advantages in strengthening health systems are mainly in the areas of health financing, system governance, accountability for health service delivery, and demand-side interventions, all of which are important to further the population agenda.”

“By supporting large-scale implementation of an integrated health sector plan that includes family planning, the Bank can play an important role in keeping family planning as a priority in high fertility and high-population-momentum countries. Even though historically some successful family planning programs were based on a vertical approach, such an approach is now considered less attractive, both from a sustainability standpoint as well as from a comprehensive reproductive health approach.”

However deceptive and “rational” the language, the document is nevertheless strangely upfront about their full-spectrum dominance, to make use of a military phrase:

“Unless population issues are approached in a multipronged fashion, it is unlikely to accelerate a demographic transition in these countries.”

The report goes on to say that: “The Bank is well positioned to systematically include population and reproductive health dimensions in key strategic documents (…). The Bank is particularly well placed to provide the fiscal and economic analysis to ensure that funding of population issues is placed within the overall development financing agenda of the country.”
“This strategy can be best achieved by a coordinated strategy implemented by a visible, strong, and high-level in-country unit with the mandate to design, monitor, and evaluate the effectiveness of the program. The Bank can help strengthen such institutional mechanisms, and foster collaboration with external national or international partners.”

There it is. World Bank “in-country units” will “strengthen” the institutions that distribute the Rockefeller-funded anti-fertility vaccines and GM Food. Above all this, the Bank uses the tools confided to them by the scientific dictatorship:

“The role of political economy in the implementation of population and reproductive health programs and policies is critical. The Bank, by providing the necessary analytical basis for policy discussion, can play a constructive role in prompting policy makers to take action now for future changes in population structure and size.”

Speaking of the scientific dictatorship, the World Bank works in concert with all the other arms of the octopus:

“As was noted in the section on the global policy context, it is impossible for the Bank to work on reproductive health issues without the support and collaboration of the broader international community. The UNFPA is the lead technical agency in the population field, with a large network of field offices. The Bank already uses UNFPA’s contraceptive procurement know-how and has intensified its collaboration in other areas (e.g., training and country program management). The WHO, as the normative agency, is a critical partner at both the global and country levels. As population issues are linked to reproductive health, HIV/AIDS, and child survival, the Bank works also with WHO, UNAIDS, and the United Nations Children’s Fund (UNICEF), respectively.”

Returning to the essence, the intention and the strategy leave little for the imagination: a global consensus is in place between all the major transnational institutions and banks: the earth’s population must be brought down, with all means necessary. The World Bank uses financial tools to bring nations on their knees, demanding they cull their numbers; the UN guarantees the political legitimizing for these depopulation policies (Agenda 21); the Foundations develop the anti-fertility vaccines and GM Food, the World Health Organization takes care of the “health-standards” and distribution. With the help of this global construct, carefully coordinated from the top-down, the scientific dictatorship has circled the wagons around all of free humanity.

Contributed by Jurriaan Maessen of ExplosiveReports.Com.