Zombies are currently all the rage. Between movies, books, games, television shows, and other media, the concept of a zombie apocalypse is very popular. And before you accuse your truly of losing his mind, you should not; the accompanying picture is brought to you courtesy of the CDC.

Also, I read that Russia was testing a beam weapon, which was introduced by Russian defense minister Anatoly Serdyukov that could fight back against a zombie attack. The Australia’s Herald Sun reports that this Russian weapon could transform humans into zombies.

I began to wonder if there really is some truth to the rumors coming out of the mainstream media (MSM) about the plausibility of something transforming humans into zombies, which would, in-turn, terrorize humanity.

In October of 2012, Navy special-operations forces, along with the Marines, took part in a DHS drill on an island off the coast of San Diego. This is not unusual until one considers the fact that the entire drill was based upon a zombie invasion. This drill was not a parody, as the exercise was also attended by former CIA director Michael Hayden.

Let me be clear on this point, DHS director, Janet Napolitano is not secretly concerned that the undead will soon overrun the human population. Instead, the agency said it wanted to make a serious counter-terrorism training exercise more fun. ABC news reported the event as an example of wasteful spending. In fact, Senator Tom Coburn (R-Okla.) told ABC News that DHS also spent “$30,000 on an underwater robot for Columbus, Ohio, $240,000 for a armored personnel carrier to protect New Hampshire’s annual pumpkin festival and $69,000 for a hovercraft in Indianapolis.” Wasteful spending, more fun? What a great way to hide what DHS is truly up to.

And just when it could not get an weirder, it is now reported that FEMA will hold a Zombie Apocalypse/Alien Invasion drill in Moscow, Idaho on April 27th, from 9 am to 5 pm with 100 participating actors. DHS scrubbed the notice of the drill from its website. However, the drill is still a go as evidenced by the fact that the County Coordinator, Sandi Rollins, for the Moscow, Idaho area is listed as being the local person in charge of the drill. Here is Ms. Rollins’ contact information

The National Geographic Channel produced a docudrama entitled The Truth Behind Zombies. The threat from zombies begins as an outbreak in which humans exhibit an extreme level of violence and entranced states as they plunge into absolute madness. Within days, the epidemic spreads and humanity is gripped with fear. The show speculates that there is something behind the zombie myth. The show then proceeds to speculate on whether a mutated virus could create a vast army of zombies, and the producers go so far as to teach viewers how to survive such a threat.

Before running for the hills, it might be useful to recall that National Geographic has always been a CIA enterprise. And it is interesting that this show surfaced in proximity to the zombie drills sponsored by DHS.

Against all common sense, I began to wonder if there could really be something to the legends of zombies and if DHS actually knew something that we did not about this potential threat. Being a researcher, I began to systematically examine each and every instance of the reports of threatening zombies using the principle known as Occam’s Razor which states that the simplest answer is most often correct answer.

Upon closer examination, the zombie-creating death ray is no more than a crowd control device capable of inflicting massive pain and mind-control. The hordes of newly created Russian Zombies were no more than dissidents who needed to be brought under control. And the Russian weapon is similar to the “microwave heater” used by the US government for the same purpose. Although the zombie-producing ray gun is a myth, the fact that the weapon is a crowd control device is highly significant.

When we strip away the zombie hype in the media, the zombie preparation drill in October of last year, according to the videotape evidence, is no more than a glorified target practice session designed to practice shooting humans.

Below is a two-minute clip of the zombie preparedness drills sponsored by DHS.

It is very difficult for anyone, who is not dumber than a box of rocks, to find the real threat posed by zombies in this video. The important thing to remember about this exercise is that the targets were human, and they were unarmed.

When one considers the leaked US Army Military Police training manual, which details how military assets are to be used to stop acts of civil disobedience, to confiscate firearms and even murder Americans on American soil, along with characterizing as terrorists Americans who are “suspicious of centralized federal authority,” and are Christians who believe the Bible is the literal word of God.

This doesn’t seem to be an unreasonable question to ask. What the hell is DHS up to? Who are the real zombies? This is a very reasonable question to ask especially with DHS purchasing billions of rounds of ammunition, placing orders for 2700 armored personnel carriers and placing solicitations for 7,000 fully automatic rifles. One should become very suspicious as to the true motives of DHS.

Who Could Ever Forget?

Do you remember when the DHS got caught using the images of these people as target practice? The pregnant woman is a zombie, as is the little boy and the elderly lady. And just like the zombies in San Diego and soon to be in Moscow, Idaho, DHS has simply replaced the term domestic terrorist with the term zombie. 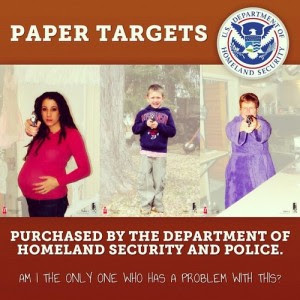 America, YOU Are the Zombies

A mythical zombie invasion is a politically correct way to practice shooting American citizens in a civilian uprising. This only makes sense: can you imagine if it were discovered that our military, DHS forces and foreign assets were practicing for civilian uprisings? It would serve to awaken a lot of the sheep who mistakenly believe that DHS was actually put in play to protect you from al Qaeda. Also, when you train your troops to be shooting at zombies, it dehumanizes the target and desensitizes the act, thus, making it easier to pull the trigger.

The battle lines have been drawn; only most Americans are still unaware that they are about to the most hunted prey on the planet. Field Marshal Napolitano, on behalf of the globalists, has declared most Americans to be enemies of the illegitimate State.

When you go to bed tonight, instead of counting sheep, instead, maybe you should think about waking up a few sheep.

Dave is an award winning psychology, statistics and research professor, a college basketball coach, a mental health counselor, a political activist and writer who has published dozens of editorials and articles in several publications such as Freedoms Phoenix, News With Views and The Arizona Republic.

The Common Sense Show features a wide variety of important topics that range from the loss of constitutional liberties, to the subsequent implementation of a police state under world governance, to exploring the limits of human potential. The primary purpose of The Common Sense Show is to provide Americans with the tools necessary to reclaim both our individual and national sovereignty.