I have an on-the-ground-report which has informed me that mind control technologies will likely be applied in the Burns, Oregon standoff. Yes, it is only one report, but the content matches what I know to be true about the technology.

I work with a consortium of engineers and we have “accidentally” discovered an anomalous band of electronic frequency which is out of the ordinary and the location is near the Burns, Oregon, stand-off event in which a group of ranchers are protesting the taking over of their land by the BLM.

I am not at liberty to discuss the delivery mechanism because it could lead to some of my colleagues. My colleagues have complained that they are no longer in charge of their own experiments and the nature and tone of the experiments is such that we all believe that a widespread application of what you have labeled “mind control” is about to be unleashed on the world, not just the United States.

You have published enough that we feel that you were the appropriate conduit to release the information on this. The public has a right to know what is about to be done to them. The RF involved is at RF at 2.4 GHz. This RF is  NOT Wi-Fi, bluetooth, microwave, etc.

If you are willing to publish and distribute, we will send you more information………….

Because I want to keep the NSA and the spooks out of my business, I wanted it noted that the above communication is not an email.

In the past 15 months, I have been approached by two groups of scientists who are gravely concerned about the development and pending application of mind control technology using electromagnetic means to deliver the technology. Both groups of scientists are fearful of their lives and one group has an amazing and bizarre means of communicating with me.

In response, I occasionally run an article on mind control technology hoping to shake loose others who are willing to be more forthcoming and are willing to go public. In doing so, I have discovered two things: (1) scientists across the planet, not just the United States, are fearful of the work they are doing in relation to mind control technology; and, (2) This technology is ready to be unleashed. In fact, there have already been beta tests, such as the “Kentucky Mall Brawl” incident.

The technology exists and here is some of the evidence to support these claims.

What are the “phony” cell phone towers all about? Are they only for the purpose of “stealing” data from the electronic devices of unsuspecting people? The answer to this question may surprise you. 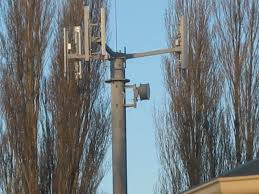 A Paul Watson report, chronicled in the video listed below, accurately portrays 50% of the operational functioning of what is presently being referred to as “phony cell towers”. Watson is correct in that these “phony towers” are indeed stealing data from your electronic devices.

However, Watson’s depiction of the phony cell phone towers only represents half of the picture. On the other side of the coin, these towers are part of a mind control apparatus. Here is an excerpt of the relevant patent.

A method and apparatus for simulation of hearing in mammals by introduction of a plurality of microwaves into the region of the auditory cortex is shown and described. A microphone is used to transform sound signals into electrical signals which are in turn analyzed and processed to provide controls for generating a plurality of microwave signals at different frequencies. The multifrequency microwaves are then applied to the brain in the region of the auditory cortex. By this method sounds are perceived by the mammal which are representative of the original sound received by the microphone.

The patent’s use of the phrase “… introduction of a plurality of microwaves into the region of the auditory cortex is shown…The multifrequency microwaves are then applied to the brain in the region of the auditory cortex. By this method sounds are perceived by the mammal which are representative of the original sound received by the microphone“. In other words, this is a smoking gun patent for what is often referred to as “voice to skull” technology. This means that the thoughts (i.e. words) in your head may not be your own. This patent clearly demonstrates that the technology has existed to control your thoughts and the technology is over 35 years old.

Today, your smart meter, smart appliances and your wi-fi networks in your home all have this capability. In fact, one of my military sources, once associated with the project known as “Owning the Weather 2025”, tells me that any device which can receive or send an electrical signal is vulnerable to the manifestation of mind control through the psychotronic manipulation of the mind. The recently exposed phony cell phone towers are only part of an overall smart grid system designed, in part, to effect mind control. My military sources tell me that this system is part of what is popularly known as “the Smart Grid”. The various Smart Grids are all being connected into a what is called a “Land Area Network”.  My sources also tell me that mind control is only one function of this network and that presently there is an effort underway to integrate the various Land Area Networks across various continents (e.g. North American and Europe). The system, once fully integrated will include health care and overall energy usage. Mind control is a byproduct of this technology.

The technology works on two levels. First, external words which can manifest as integrated thoughts, can artificially and electronically be placed within your head. Second, your overall emotional functioning and immediate emotional perception can dramatically be altered through the application of “targeted” frequencies designed to manipulate a desired and overall emotional state of functioning.