Rule number one for any serious crime scene or investigation is to gather all the evidence and all testimony first, before being able to establish criminal charges, let alone deliver any meaningful verdict.

In an extraordinary executive intervention, the President of the United States has weighed in on the Boston Bombing case – already delivering a guilty verdict for the Tsarnaev brothers.

Barack Obama informed the nation this weekend, “Whatever hateful agenda drove these men to such heinous acts will not, cannot, prevail. Whatever they thought they could achieve, they’ve already failed.”

The President added to this conclusion,“Why did young men who grew up and studied here as part of our communities and our country resort to such violence?”

Why is there such an incessant rush by the White House to quickly draw a line under this case? Does the President know something yet to be discovered by CSI investigators and witness interviewers in this case?

One reason could be the ever-growing list of unanswered questions and evidence yet to be addressed by either the FBI and law enforcement in charge of this case.

Dzhokhar still only a suspect

Granted, a trial in the media is almost expected these days in America, but are we being asked to give up the expectation that the business of determining guilt should be within the jurisdiction of CSI teams, police detectives and the courts – and not within the scope of any politician’s remit? Is it the President’s role to play judge in such matters?

Despite all the patriotic rhetoric, political hype and media fanfare endured over this last week, the fundamental problem with such conclusive statements by the executive branch – is that suspect Dzhokhar Tsarnaev is only that – a suspect, and no actual or real forensic, or eyewitness evidence has been produced to prove that either him, or his deceased older brother were the actual bombers.

It has been confirmed that the suspect Dzhokhar was not read his Miranda Rights by law enforcement. According to officials, the surviving suspect should not receive the same Constitutional rights normally offered to Americans by invoking a “public safety exception”, effectively placing him in the category of enemy combatant.

“The government has invoked the public safety exception, a designation that allows investigators to question the teen without reading him his Miranda rights and without a lawyer present, another Justice Department official, also speaking on condition of anonymity, told CNN.”

Will Dzhokhar be allowed to talk?

Interestingly, we are told that 19-year-old student Dzhokhar may not be able talk at all, due to injuries sustained to his throat.

The surviving suspect in the Boston Marathon bombings suffered an injury to his throat and may not be able to talk, a federal official told CNN on Saturday, possibly hindering attempts by authorities to question him about a motive in the attack.

The health and well-being of the suspect should be of the utmost importance to everyone involved. One should also note here that if this suspect is not able to tell his story in public, it would be a great loss to the American people, who might be robbed of any further evidence and insight into the actual involvement of the two Tsarnaev brothers in the Boston Bombings last week.

Beyond this, if any untoward behavior or broken procedure was done by law enforcement during the pursuit and apprehension of the two suspects, this would likely be revealed by Dzhokhar’s own testimony. His inability to talk might be convenient for law enforcement if any basic rules of engagement were broken. 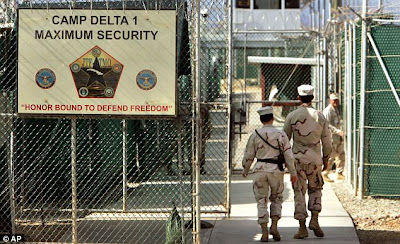 PHOTO: Officials announce that Gitmo and CIA torture team on its way to handle suspect questioning

If this suspect is able to talk, eventually he may have to go through a process of interrogation that is normally reserved for US detainees held at the government’s dubious offshore facility in Guantanamo Bay, Cuba.

ABC news confirmed today that a team specialising in ‘enhanced interrogation’ is already on the way to conduct information extraction from the 19-year-old student.

Tsarnaev will be questioned by a federal team called the High Value Detainee Interrogation Group, which includes officials of the FBI, CIA, and Defense Department, an Obama administration official said.

This development carries additional implications as to the definition of a suspect’s rights to a fair testimony and trial in the United States.

Sadly, it threatens to drag the entire torture debate back to square one again, with the obvious question rearing its old head: is any evidence or testimony gleaned through torturing a suspect even admissible in a modern court of law? The key word there being “modern”.

Rather than seize the opportunity to advance modern progress in justice and human rights – to really prove the robustness of our own justice system (yes, that one we supposedly fought and died for), the Federal jackboot, led in this instance by President Obama, has chosen to digress instead.

Patrick Henningsen’s many articles and latest video reports can be found at 21st Century Wirewhere this article first appeared.

Continue Reading
You may also like...
Related Topics:bomb, boston marathon, no trial, Obama