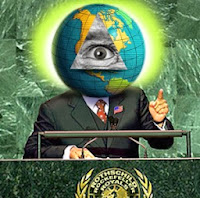 Professional disinformers of both the Republican and the Democratic factions of the Repucratic party[1] have joined forces once more to brainwash us about a new aberration they call Obamacare. But Obamacare is nothing but a reincarnation of a corpse called Hillarycare, which died of natural causes in 1993. And Hillarycare is actually the reincarnation of a mummy called Rockefellercare.Yes, Obamacare, like all the rest of the aberrations created to make our lives miserable, is a Rockefeller baby!

Now, you don’t have to be a rocket scientist to conclude that, given the fact that Barry Soetoro (aka Barack Hussein Obama) is a creation of the Rockefellers, all of his “brilliant” ideas — ranging from the so-called Affordable Care Act to the war against Syria — have been concocted at the Harold Pratt House in Manhattan, headquarters of the Council on Foreign Relations (CFR). If you already don’t know, the CFR is an organization where a group of traitors — Wall Street banksters, oil magnates, CEOs of transnational corporations, politicians and a few high ranking members of the US military — conspire every day behind our backs planning the most efficient way to kill no less that 85 percent of the world’s population and reduce the survivors to pre-industrial levels of consumption. They call this aberration the New World Order.

You may have heard about it, because once he moved to 1600 Pennsylvania Avenue, George H. W. Bush repeated it over and over every time he opened his mouth like a circus parrot, to the delight of his “conservative” Republican followers.

Actually, however, despite the claims of the disinformers of both the right and the left, the New World Order is not new at all. It is a return to the dark Middle Ages, with just two social classes: the super rich and powerful masters comprising less than 1 percent of the population — guys like the Rockefellers, Bill Gates, Warren Buffet, the Bushes, the Clintons— and the super-poor serfs comprising the remaining 99 percent —that is, people like you and me.If you want to know what these guys have in mind, just watch the film The Hunger Games and you’ll get a pretty good idea.[2]

How do we know that Hillarycare is actually Rockefellercare? Well, just by chance. In early 2008, Judicial Watch published a memorandum that the Clinton Library was forced to release under the Freedom of Information Act. The 24-page memo shines a spotlight on Hillary’s little-known relationship with America’s mightiest oil and banking dynasty of robber barons. Dated May 26, 1993 and addressed to “Hillary Rodham Clinton”, the memo came from Senator John D. Rockefeller IV of West Virginia — better known as Jay Rockefeller — whose robber baron great-grandfather founded Standard Oil.

The memo lays out a detailed strategy for pushing the “Clinton Reform Plan” for universal health coverage. In it, Rockefeller snaps orders at Hillary in the imperious tones of a man used to expecting full obedience from his servants.

Jay orders Hillary to get tough on critics of the health plan by resorting to dirty tricks. “Impeach the credibility of opponents,” he writes. “Portray them as ‘perpetrators,’ ‘paid lobbyists’ and purveyors of ‘ideological extremism’ and assign investigators to conduct ‘opposition research’ on them and expose their ‘lifestyles.’” And he finishes by ordering, “Do not allow them even one day without scrutiny.”[3]

Further indication that the Rockefellers were the ones secretly pushing Hillarycare is that the head of Hillary’s health care reform commission —a.k.a. the President’s Task Force on National Health Care Reform— was none other than Ira Magaziner, a long-time agent of the Rockefellers. Magaziner was the one the Rockefellers assigned the task of crafting the Clinton administration’s proposal for “managed competition” among health plans purchased through regional “health alliances.”

Granted, the current health care in the U.S. is the most expensive in the world, and it is not the best as some Republican brainwashers claim.[4] But, as you may expect, the Rockefellers’ goal is not to provide cheaper and better medical care for Americans, but a disguised government subvention to enrich even more Big Pharma, Big Med and Big Insurance.[5] But there is more than meets the eye in this Rockefeller contraption.

Since the very beginning, some people have suspected that the Rockefellercare in his new version as Obamacare has provisions to provide for easy and cheap abortions for the “useless eaters” as well as simple ways to terminate with extreme prejudice the lives of old people who are not members of the Rockefeller family.[6] It has not been easy to prove it, however, because for some strange reason, not many people have seen, less read the Affordable Care Act, not even the legislators who were supposed to approve it.

Nevertheless, being a Rockefeller baby, you can bet your money that some eugenic measures have been allowed to infiltrate into the Obamacare monster. Actually, the brainwashing campaign to make killing old people more palatable to the American people already has begun. A recent article on Yahoo News warns “New Focus on Overlooked Global Threat.” The link brings you to an AP article: “Global Study: World Not Ready for Aging Population.” [7]

So, by a typical act of Rockefeller prestidigitation, they have turned old people into a serious global threat. Therefore, I would not be surprised if someday it is found that the same people who planned the “War on Drugs” and the “War on Terror” are actually planning a “War on the Older.”

And don’t make the mistake of underestimating these people. Don’t forget that they are brainwashing experts and have full control over the mainstream media presstitutes. They are the same ones who changed CO2, an inert, beneficial gas essential for animal life in this planet, into a poisonous, evil gas to blame for a human-caused non-existing “global warming.”

According to CFR agent Lester R. Brown of the Worldwatch Institute, a Rockefeller supported organization, since the end of World War II,

… atmospheric carbon dioxide (CO2) levels have increased by 13 percent, setting the stage for hotter summers. The protective ozone layer in the stratosphere has been depleted by 2 percent worldwide and far more over Antarctica. Dead lakes and dying forests [8] have become a natural accompaniment of industrialization. [9]

So, if you are over 65, poor, or belong to any of the “inferior” races, be careful. The Rockies and their minions are out to get you.

2. If you want to know who they are, how they operate, and what are their ultimate goals, you may take a look at my book Psychological Warfare ant the New World Order: The Secret War Against the American People.

He also hosted the documentaries Treason in America: The Council on Foreign Relations and Partners in Treason: The CFR-CIA-Castro Connection, produced by Xzault Media Group of San Leandro, California, both available at the author’s site at http://www.servandogonzalez.org.