Have you noticed that it has become trendy to bash preppers?  For a long time the prepper movement was ignored, but now it has become so large that it is getting very difficult for the mainstream media to pretend that it is not there.  In fact, it has been estimated that there are now approximately 3 million preppers in the United States alone.  So now the mainstream media has decided that mocking the movement is the best strategy, and lots of “critics” and “skeptics” out there have picked up on this trend.  Instead of addressing the very real issues that have caused millions of Americans to prepare for the worst, those criticizing the prepper movement attempt to put the focus on individual personalities.  They try to find the strangest nutjobs they possibly can and then hold them up as “typical preppers”.  The goal is to portray preppers as tinfoil hat wearing freaks that need to be locked up in the loony bin for their own personal safety and for the good of society.  The criticism of preppers has really ramped up in recent months, and it will likely get even worse in 2013.  The establishment does not like any movement that is outside of their control, and the prepper movement is definitely not under their control.

Often, hit pieces on the prepper movement are disguised as articles or shows that are supposed to be “balanced” looks at the movement.  This is especially true of shows such as “Doomsday Preppers“.  That show is the highest rated show that the National Geographic channel has ever had, and it can be a lot of fun to watch.  But if you notice carefully, they almost always try to feature people that they consider to be “freaks” or that are “on the fringe of society”.  Many other “reality shows” follow the exact same recipe.  The goal is to draw high ratings by running a “freak show” that people can’t help but watch.

Even if you go on such a show and try to do your best to explain your prepping in a rational and coherent manner, they will still edit the footage so that it makes you look like a freak.  It really is a no-win proposition.  These shows are trying to make it clear that preppers should be mocked.  The underlying implication is that these people are crazy and that what they are doing is stupid.

And at the end of each segment, the producers of the show are careful to include reasons why the prepper that was just featured is being irrational and why the things they are preparing for are extremely unlikely to happen.  Just in case you missed the message they have been trying to communicate the entire time, they come right out and tell you the conclusion that you are supposed to come to.

And of course we see the same attitudes reflected in reviews of the show.  For example, the following is from a recent Los Angeles Times review of the new season of Doomsday Preppers…

Still, it’s hard not to feel for young Jason from tiny Plato, Mo. (pop. 109), who is awaiting worldwide financial collapse with his homemade, nail-studded “mace-ball bat,” and that his is a life on the verge of going completely wrong. “I’m not afraid to have to kill,” Jason says, in his camouflage pants and dog tag, and there seems to be no question in his mind that it will come to that. (“Jason has always been a worrywart,” says his mother.)

Or for Big Al, from Nashville, who is getting ready for old-school nuclear war by digging down into the earth and surrounding himself with steel. (“I prefer not to use the term ‘bunker’ — to me, it’s an underground house.”) He spends months at a time by himself down there, training for the inevitable — which he expects to weather alone — cooking different combinations of canned goods and, you know, spending too much time alone. One leg pumps constantly as he talks.

The preppers don’t want my pity, of course — quite the opposite, I’m sure. The joke will be on me, they would say, when I am expiring from fallout or smallpox, being carried away in a tornado or torn apart by the hungry ravaging hordes. (I am not even prepared for the Big Earthquake that might more probably get me.)

Would this Los Angeles Times reporter mock other groups of Americans in a similar manner?

But the establishment has made it clear that it is open season on preppers, so this particular writer mocks them with no fear.

Not that any prepper that is thinking clearly would go on a show such as “Doomsday Preppers” anyway.  Sure, it is nice to be on television, but if you are a serious prepper then one of the last things you want to do is to go on television and advertise your preparations to millions of people.

Others have picked up on the contempt that the establishment has for preppers and have started to issue their own critiques of the movement.  For example, an “emergency manager” named Valerie Lucus-McEwen recently published a blog post entitled “Doomsday Preppers are Socially Selfish” that got a lot of attention…

You might wonder why someone like me, who has been in the business of encouraging disaster preparedness for a very long time, is so critical of people who are doing just that. It’s because they are being socially selfish – preparing themselves and the hell with everyone else.  Instead of spending time and energy making changes that would benefit the larger community, in their very narrow focus of loyalty they are more concerned about themselves.

Emergency Managers can’t afford that kind of attitude.  It is diametrically opposed to everything we do. Our job is to prepare individuals and communities and jurisdictions and regions and – ultimately – the globe for disasters, knowing we won’t always succeed.

Selfish is defined as concerned excessively or exclusively with oneself, seeking or concentrating on one’s own advantage or well being without regard for others. By that definition, Doomsday Preppers are socially selfish – Disaster Preppers are not.

Subsequently, she has issued a very brief apology, but what she wrote is very typical of the type of thinking that is out there these days.  Anyone that does not “trust the government” and attempts to become “self-sufficient” is actually very “selfish” and is not “being a good citizen”.

And sadly, it appears that being a “prepper” is now enough to get special attention from the authorities.  For example, a 46-year-old prepper in rural Maryland named Terry Porter recently had his home raided by 150 armed law enforcement officers.  The details of this incident were described in a recent article by Paul Joseph Watson…

According to a charging document filed in Washington County District Court, Porter “openly admitted to being a prepper” (as if this was an illegal act in and of itself) and said that he was “very irritated” about the recent presidential election. Porter had also invested in an underground bomb shelter and had installed surveillance cameras on his property.

Once the investigation into Porter began, police discovered that he had a 1992 felony drug conviction and was therefore barred from owning firearms. On Thursday last week, no less than 150 armed and militarized police and FBI agents in the guise of tactical assault teams descended on Porter’s house as if they were confronting a terrorist cell. The raid also included helicopters, SWAT crews, armored vehicles and even excavation equipment.

Porter was absent at the time of the raid but turned himself in the next morning at Hagerstown Barrack.

After the raid, the claim that Porter was stockpiling “10-15 machine gun-style firearms” was demolished when police uncovered “four shotguns, a .30-30-caliber rifle and two .22-caliber rifles,” hardly a deadly mass arsenal.

Would 150 officers have shown up at his home if he had not been identified as a “prepper”?

But “preppers” have been labeled as “dangerous” and “crazy” and that is the way that law enforcement authorities now treat them.

So why are preppers hated so much?

It is because they are a direct challenge to the status quo.  Just by prepping, preppers are proclaiming that they do not have faith in the system.  But most people have complete and total faith in the system, and many of them do not like to have that faith questioned.  As I have written about in other articles, polling has found that most Americans expect that the government will take care of them if disaster strikes.  Most people have been trained to “trust the experts” and to “trust the government” all of their lives, and that conditioning can be very difficult to overcome.

This blind faith in the system is a big reason why so many Americans have not made any preparations at all.  In fact, one recent poll discovered that most Americans do not even have three days worth of food in their homes…

A recent survey found that 55 percent of Americans have less than three days supply of food in their homes. Many people have no emergency supplies, or even a first aid kit.

That absolutely astounds me.

Another poll discovered that 64 percent of all Americans are “unprepared for a major natural disaster”.

So what is going to happen to them if something even worse than a major natural disaster hits?

For example, what if the electrical grid went down and we had no more power for an extended period of time?

So I guess we sure had better hope and pray that nothing goes seriously wrong, eh?

The truth is that it isn’t the preppers that are crazy.

Rather, it is the people that believe that everything will always be fine and that the government will always take care of them that are crazy.

Our world is becoming increasingly unstable, and now is the time to get prepared.

You may get mocked a bit for prepping now, but later on you sure will be glad that you prepared for the worst. 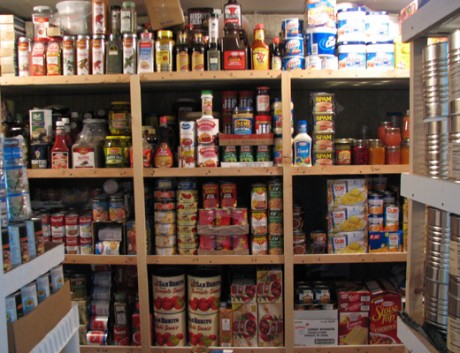