A deeply polarizing new president, a disastrously misguided official narrative that the political Establishment doggedly supports despite a damning lack of evidence, and an economy teetering on the edge of recession–and worse.

Sound familiar? Welcome to 1969 redux. The similarities between the crises unfolding in 1969 and the present-day crises are not just skin-deep–they’re systemic.

1. Nixon was if anything more polarizing than Trump. If there was any politician Democrats loved to hate, it was Nixon. Yet Nixon won a close race against an Establishment Democrat, at least partly because he ran as a “peace candidate” and because he spoke to the Silent Majority who disagreed with the nation’s direction. The Silent Majority was mocked and ridiculed by the mainstream media as racist, close-minded deplorables.

2. The Democratic Party had become the Establishment bastion of war-mongering. The Democratic White House had been obscuring its devastating strategic and tactical miscalculations behind a slick PR campaign and a pervasive and often illegal program of suppressing dissenters and whistleblowers.

3. At the behest of the Establishment, an immense propaganda machinery had been running full-tilt to paper over foreign-policy failures and tragedies (including but not limited to the Vietnam War). In 2017, this immense propaganda machine is focused on discrediting the Trump presidency by unearthing or fabricating evidence of collusion with our default Bad Guy, Russia.

4. The political Establishment had decided to tamp down discontent with the Vietnam War by borrowing vast sums to pay for both “guns” (the war) and “butter” (the Great Society social welfare programs). Paying for the war and a military capable of fighting one-and-a-half other wars (at that time, the Pentagon was geared to fight 2.5 wars) would have required some sacrifice in domestic spending, and that would have further inflamed popular resistance to the Vietnam War. The expedient (and predictably disastrous) choice was to ramp up deficit spending so no domestic sacrifice was needed to pay the crushingly high costs of the Vietnam conflict. In 2017, U.S. public debt basically doubled during the Obama/congressional guns and butter borrowing spree from $10 trillion to $20 trillion.

5. The U.S. economy had by most measures topped out in 1966 or 1967, and by 1969 the veneer of permanently rising prosperity was shredding. The first wave of globalization washed ashore as our enemies and allies in World War II had built powerful export economies that had the advantage of cheap currencies via a vis the U.S. dollar.

6. China was a potentially destabilizing force that threatened U.S. hegemony in the Pacific. In 1969, China was deep in the chaotic throes of the Cultural Revolution which decimated its educated and leadership classes and destroyed much of its physical cultural heritage. In 2017, China’s monumental economic growth is losing steam even as its designs to establish hegemony in the South China Sea increasingly threaten its Asian neighbors’ security.

7. The Cold War with the U.S.S.R. was heating up in numerous places around the world, including the Mideast and Southeast Asia.

8. Beneath the relative stability of the Cold War geopolitical stand-off, the global economy and social order was changing in profound ways. Technological advances were poised to fatally disrupt many established and supposedly permanent centers of power. Trade and capital flows were shifting in ways that undermined the Bretton Woods currency order, and social/cultural revolutions were spreading around the globe like wildfire.

9. The mainstream media parroted the official narratives and “facts” until the counter-evidence was too overwhelming to ignore.

And here we are again, in so many ways. A deeply polarized nation, angry over rising expectations that no longer match economic realities, an Establishment that doubles down on failed policies and narratives rather than admit catastrophic errors of judgment, a political order that pursues public relations and “signaling” over substance, a political/ financial Elite that chooses political and economic expediency, kicking the can down the road rather than tackle thorny problems head-on, a stagnating economy that is poised on the precipice of profound technological and social disruption, and a global order that is fraying and coming apart at the seams.

The decade following 1969 was one of multiple global disruptions in the political, social, energy, geopolitical, currency and economic spheres. The difference now is that the buffers that existed in 1969 are now paper-thin, and so the potential downside of disruption and instability is much, much greater. 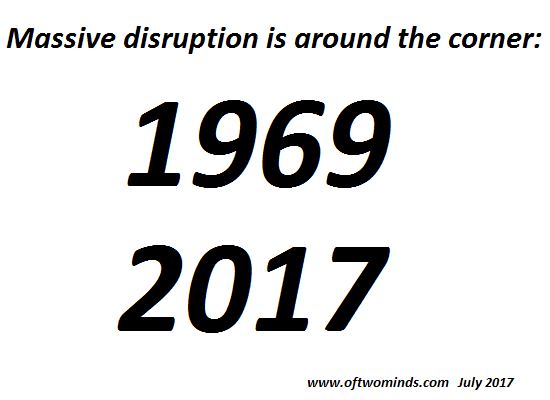