Eugenics, the social movement claiming to improve the genetic features of human populations through selective breeding and sterilization and based on the idea that it is possible to distinguish between superior and inferior elements of society, played a significant role in the history and culture of the United States prior to its involvement in World War II. Eugenics was practiced in the United States many years before eugenics programs in Nazi Germany and U.S. programs provided much of the inspiration for the latter. (source)

Recently we went to take the Cold Spring Harbor Laboratory tour, mainly just to see if the place owns up at all to its long and infamous eugenics history. The short answer is no, it wasn’t mentioned in any way whatsoever throughout the tour, and the history of the buildings themselves was spotty and hand-picked to carefully avoid mentioning anything that would even hint at eugenics or the fact that the lab was essentially considered the home of eugenics in America for the first half of the 20th century.

When we inquired about where the Eugenics Record Office was located, we weren’t given an answer either. We were told we could check with the Carnegie Institute library on campus which, of course, wasn’t open at the time we were told to go there (and the tour guide obviously knew it).

When you do a search for the Eugenics Record Office online, you can quickly find Cold Spring Harbor Laboratory’s rather elaborate eugenics archive (complete with animated eugenics tree loading page… such a nice touch), but there’s nothing about an address for the ERO and all the information about it is vague as to where it is actually located at. This resulted in us driving around for over an hour trying to find the place just based on 100-year-old photographs and a vague description in a New York Times article about it being less than a mile from the lab itself. 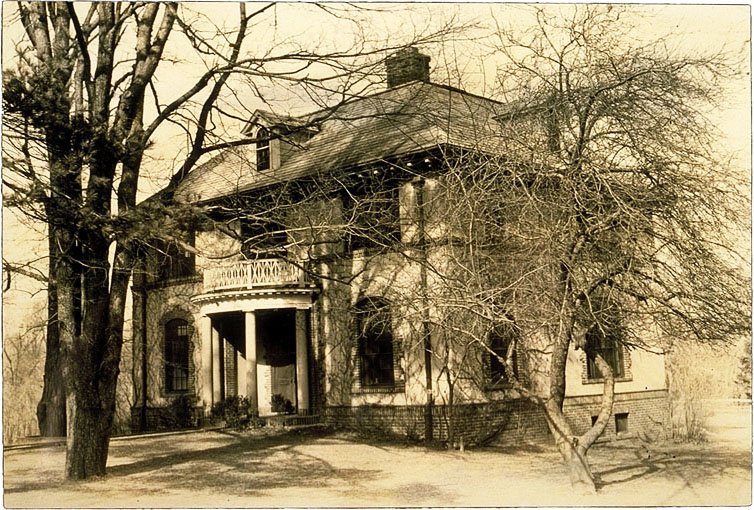 The Eugenics Record Office just after it was built in 1913 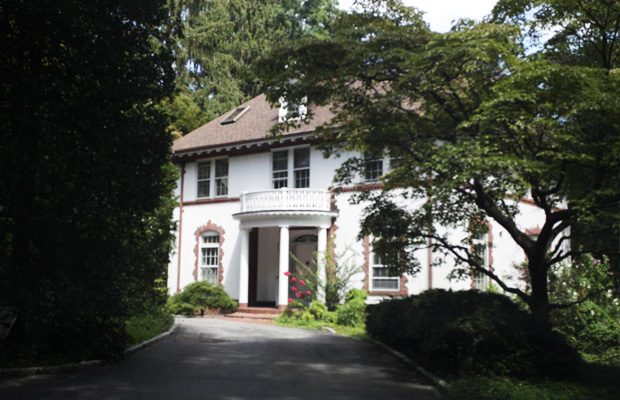 Well… we did finally find the office tucked away in the woods a ways up the street, almost completely hidden from view of the main road by trees, in a spot few would likely check. An official sign out front proclaims it to be “Holly Hall,” but there’s nothing online about when it was named that or if it is related to the ERO time period for the building (1913-1940).

And apparently it’s for sale (not that the realtor mentioned anything in her glowing description of the property that it was built by Mrs. E. H. Harriman, a prominent eugenicist and mother of Skull and Bones alumni diplomat Averill Harriman, specifically to house the Eugenics Record Office either). In fact, there’s only one article that shows the modern day house and links it to eugenics, but it’s a completely misleading fluff piece titled, “Rich Cribs: Cold Spring Laboratory was to fill this home with eugenics records.” 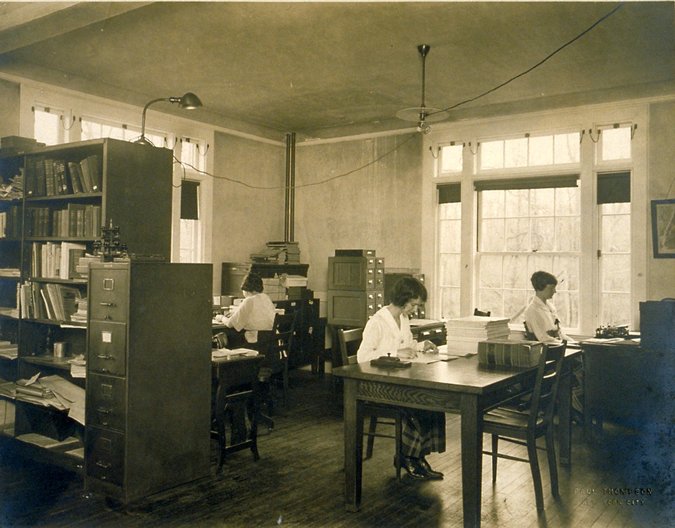 Lots and lots of them, actually. 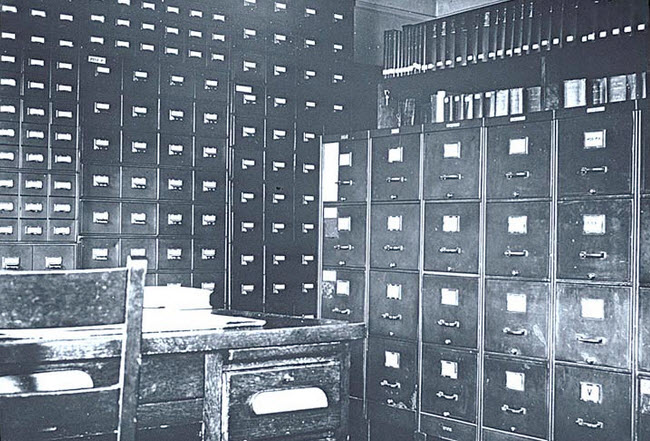 That short blurb goes on to imply that the house wasn’t built by Harriman for the express purpose of a eugenics research facility. Either someone has utterly failed to do even a hint of research or someone is purposefully trying to cover up the house’s true past.

Nowhere in the ads for the house or that article is it mentioned that this place is directly responsible in large part for the passage of eugenics laws across America that resulted in the forced sterilization of tens of thousands of people… a heinous act based on racism and elitism passing itself off as “science.”

But really… who would actually want to live in the former Eugenics Record Office? The whole place seemed haunted by its negative, ugly past. In the brief moments we were there, the feeling was palpable. 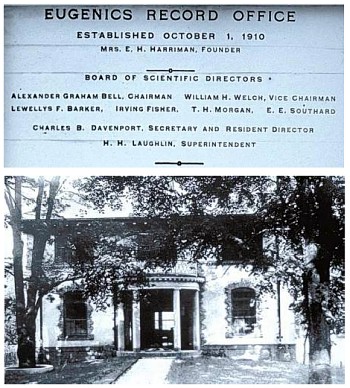 It was glaringly clear to us that they want this place completely forgotten and lost to time.

Too bad for them. 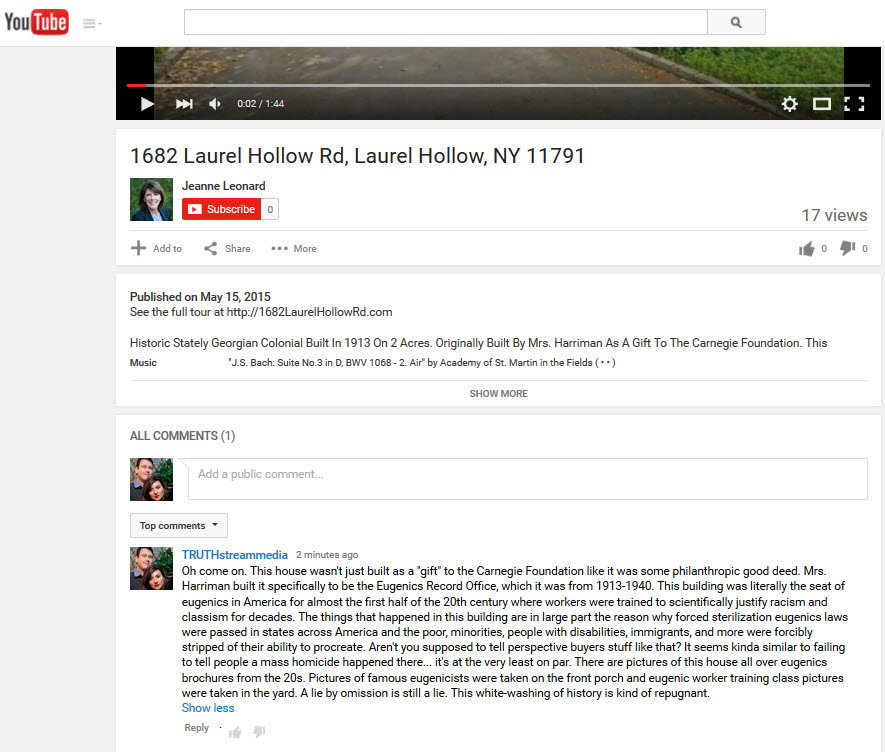 Aaron Dykes and Melissa Melton created Truthstream Media.com as an outlet to examine the news, place it in a broader context, uncover the deceptions, pierce through the fabric of illusions, grasp the underlying factors, know the real enemy, unshackle from the system, and begin to imagine the path towards taking back our lives, one step at a time, so that one day we might truly be free…

Aaron Dykes and Melissa Melton created Truthstream Media.com as an outlet to examine the news, place it in a broader context, uncover the deceptions, pierce through the fabric of illusions, grasp the underlying factors, know the real enemy, unshackle from the system, and begin to imagine the path towards taking back our lives, one step at a time, so that one day we might truly be free...