Jefferson County in Alabama is the state’s most populous county and also its poorest. One of the poorest of those poor areas is Birmingham, Jefferson County’s largest city. Here water and sewerage bills have quadrupled in the last 15 years and with combined sewerage and water bills coming in at around $300 a month, this leaves the same amount out of the average social security cheque of $600 a month to cover everything else, food, clothing, and all other utilities. Low paid workers, of which there are many fare no better.

Many people have opted to buy drums of water from petrol stations rather than pay their ever increasing bills. They use these drums of water for drinking, washing and in their portable toilets which can be seen dotting back yards across the area, the modern version of the outhouse. They pay a fee to a sanitation company to remove the waste. It’s cheaper than letting the city take care of it.

Jefferson County is in this position because planned work on the sewerage system was estimated to cost $300m but this bill soared to $3.1bn due to construction problems and a series of bond and derivative deals that went bad in the financial turmoil of 2008. The fact that six officials have been found guilty of corruption is no comfort to the residents there who have no running water or mains sewage. To add insult to injury their bills are set to rise 25% a year for the next three years to ensure the project is completed.

Each year some 400 people in the US are treated for typhoid fever, most have contracted it whilst travelling to the developing world. Although a severely debilitating disease, deaths listing typhoid as the cause are rare in the United States. Most will survive due to good nutrition, a return to clean drinking water and prompt medical attention. Remove any of these things and typhoid could quite easily get a foothold in the southern states. It is highly contagious and easily passed from person to person. Typhoid is only one of many diseases that are spread due to unsanitary conditions including the inability to wash clothing and bedding on a regular basis as is the case with typhus.The day is coming when they wont have the $14 to have a company come and empty their portapotty, when that day comes where will this human waste go? It has to go somewhere and faced with a choice of paying for sanitation or feeding their children many will opt for the latter. It’s a stark choice, removing either from the equation will lead to ill health.Depriving an ever increasing number of residents of water in a large urban area is literally inviting diseases to take hold there. As food prices continue to rise, and are projected to rise even further, the residents of areas such as this face a stark choice regarding how to spend their money. According to community leaders such as Sheila Tyson people are being pushed to the very limit.

The implications for a reduction in the amount of people who have adequate supplies of clean drinking water and reliable sewerage systems extends way beyond a city where corrupt officials and bad planning has forced this onto the people living there. 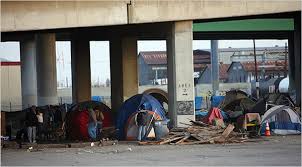 Each day more and more people are becoming homeless, living in their cars, under bridges or moving to tent communities outside of city areas. All of these people are finding themselves in the same situation as the people of Jefferson County. Like the residents of Jefferson County they are in this situation because the government chooses to ignore the fact that people can no longer afford to live their lives with the basic necessity of clean water. They are there because the government chose to support the bankers instead of the people. These people see their foreclosed homes decaying in front of their eyes, nobody is living in them, no money has been made by the banks selling them on. Whole families forced out for what? So their homes crumble, get demolished and the government takes the land? Who knows ? 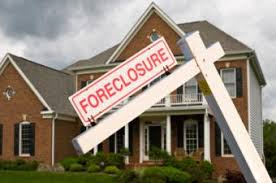 What is known is that living in such conditions is an open invitation for disease. Lots of disease. Typhoid has been used as an example, but that is just one of many diseases that routinely surfaces during economic down turns, after natural disasters and in times of war. History is full of such events. Typhoid, typhus, cholera, dysentery, intestinal worms, hepatitis, gastroenteritis and many, many more all arise from contaminated water and/or lack of adequate sewerage.

Its hard to believe that this is happening in the First World in the twenty-first century but it is. It needs to stop and it needs to stop now before many lives are lost to conditions that are rarely seen outside of the developing nations.

Those responsible for the unholy mess that is insidiously enveloping the United States, Europe and the UK should hang their heads in shame, and those officials responsible for so many residents of Jefferson County not having access to running water and sewerage should not only be charged with corruption but with reckless endangerment. The bankers foreclosing on homes that now stand decaying are in the long term going to be partly responsible for the increase in suicides being noted amongst the homeless and those who are pre-empting foreclosure, taking their own lives rather than watch all they have worked for be taken from them. 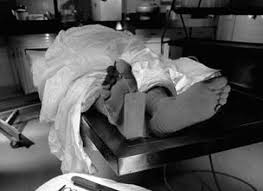 It’s a sad indication at how woefully inadequate our so called leaders are. How far removed they are from the plight of ordinary families trying to live their lives is blatant. The provision of clean, safe drinking water and adequate sewerage should not be for the wealthy alone. The same men and women who are sending billions in aid to developing nations to help ensure that the people have clean safe water are allowing their own people to live without it.

When typhoid, cholera, hepatitis and the rest are running rampant we will all know who to blame.

Typhoid should not be confused with typhus. Typhus is spread by the faeces of infected lice whereas typhoid is caused by the bacterium Salmonella typhi, which is related to, but not the same as, the salmonella that causes food poisoning.

The Salmonella typhi bacteria are shed in human faeces and poor hand hygiene can lead to the disease being passed on via contaminated surfaces and food. It is possible but uncommon for the bacteria to be shed in urine, and hand hygiene once again can assist in preventing person to person spread.

In areas with poor sanitation and a lack of a secure drinking water source its common for contaminated human waste to get into the water supply and anyone bathing, drinking or washing food in that water, even a good distance away, is going to come into contact with the Salmonella typhi and possibly contract the disease from that contact. Typhoid fever is found throughout the developing world in particular in south and southeast Asia.

In those that suffer from typhoid but do not have medical treatment approximately one in twenty will become a carrier of the disease. They will continue to shed the bacteria in their faces and urine but will show none of the symptoms themselves.

The initial symptoms of typhoid fever occurring during the first week of infection are:

During the second week of infection:

During the third week of infection:

During the third week 1 in 10 people will develop serious complications such as internal bleeding which can be severe enough to drop the blood pressure to unsustainable levels leading to the death of the patient.


If typhoid fever is diagnosed early, usually taken to mean during the first week of infection most people will be prescribed a 7-14 day course of antibiotics. Some strains have developed resistance to one or more types or classes of antibiotics and therefore combination therapy is often used and this is dependant on where the disease was contracted as different strains respond to different drugs.

During this recovery period rehydration is a top priority and the patient should rest as much as possible and eat small regular meals rather than larger meals less frequently.

Patients diagnosed after the initial week of infection are more than likely going to require hospital treatment. Antibiotics will again be tailored to the strain but will most likely be given IV as will fluids and nutrients.

Regardless of when treatment started about one in twenty people will experience a relapse about a week after the antibiotic therapy is stopped. This second bout is usually much less severe than the first and is of a shorter duration than the original illness. Another course of antibiotics will usually clear the bacteria and ensure no further relapse.

No one who has had treatment for typhoid should handle food until medical tests confirm they have no bacteria left in their system.