Imagine Harvey Weinstein wielding a “top secret” stamp to block any exposure of the uncomfortable truth and you have the FBI, CIA and NSA.

We rarely get an insider’s glimpse of the intelligence community’s pettiness, hubris and incompetence. The Ministry of Propaganda is tasked with showing the NSA, CIA, FBI, et al. as super-competent, super-dedicated, and focused on defeating evil (which is always presented as unambiguously evil, i.e. anti-American.)

Although it’s 30 years old, I still recommend this account of a top MI5 (U.K.) officer, SpyCatcher: The Candid Autobiography of a Senior Intelligence Officer.

I’ve read many books on the intelligence community, but few (if any) reveal the inter-agency rivalries and bad blood that (as far as I can tell) still exist beneath a formal veneer of co-operation. The CIA and FBI were always envious of the NSA’s SigInt (signal intelligence, i.e. eavesdropping), and so they’ve attempted to create their own versions, with laughably incompetent results in the case of the FBI’s “Russians stole the election” inquiry.

The CIA was also envious of the Pentagon’s Black Ops capabilities, so they created their own Black Ops division as well as SigInt capabilities. They also horned in on the FBI’s monopoly on domestic spying in the 1970s; they wanted it all, and chose to create their own versions of the competing agencies.

Unfortunately for the nation, their petty rivalries, general incompetence and penchant for political vendettas, coups, assassinations, patsies, fall-guys, and other “cowboy” recklessness is vividly revealed by the Kennedy archives.

Rather than protect the nation, these unaccountable and uncontrollable agencies have endangered the nation behind their Iron Curtain of secrecy, a convenient cloak which masks their hubris, incompetence, pettiness and complicity in cover-ups of the truth that cannot be revealed to the American public lest it embarrass the powerful.

Imagine Harvey Weinstein wielding a “top secret” stamp to block any exposure of the uncomfortable truth and you have the FBI, CIA and NSA. Forget the smoking gun, look at the complicity in the cover-ups of incompetence and gross errors of judgment: no conspiracy or tin-foil hat required. 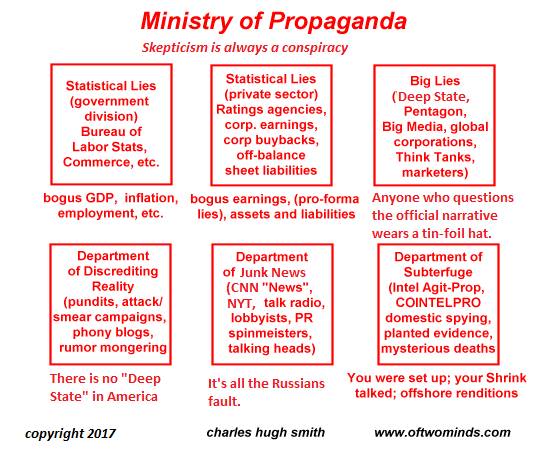