Like many other people, I am following the story of what happened to Malaysia Airlines Flight 370 with keen interest. Much of what we’ve been told doesn’t add up, deepening the mystery.

It seems to me that we can already draw a number of conclusions from the known data by pursuing a logic-based analysis of what is possible and what can be excluded as illogical.

Let’s start with what is known:

1. The Malaysian authorities have been evasive to the point of misdirection, in other words, they’ve hidden the facts to serve an undisclosed agenda.

What is the agenda driving their evasion? What is known is that Malaysian security is obviously lax. This fact has caused Malaysian authorities to lose face, i.e. be humiliated on the global stage. Malaysia is an Asian nation, and maintaining face in Asia is of critical importance. We can conclude that one reason the Malaysian authorities are dissembling is to hide their gross incompetence.

It is also suspected that Malaysia is a safe haven for potentially dangerous Islamic groups. (Follow the threads from Pakistan’s secret nuclear proliferation program to Malaysia for documentation of this possibility.) The Malaysian government may have an informal quid pro quo along these lines: you are welcome to set up shop as long as you don’t cause any trouble here or do anything to cause Malaysia to lose face.

This provides another logical source of Malaysian evasion: if there is indeed a terrorist connection to the loss of the aircraft, this would focus the global spotlight on Malaysian tolerance of potentially dangerous groups.

That the Malaysian military was unable to effectively monitor the aircraft or coordinate with civilian air traffic control (ATC) also suggests incompetence at the most sensitive levels. Revealing this would also cause a loss of face.

Summary: Malaysian authorities have not been truthful or timely in their reporting. The logical conclusion is that they’re hiding data to protect national pride and the true state of their abysmal security.

2. Additional information is available but is not being shared with the public.

To take one example, the Aircraft Communications Addressing and Reporting System (ACARS) on Flight 370 was functioning and automatically sent data on four critical systems, including the engines. This data has not been released by Malaysian Airlines.

It also appears that the pilot of another 777 airliner heading to Japan contacted the pilot in Flight 370 and reported the transmission was garbled.

Even with the transponder off, the aircraft would appear on primary (military) radar. The Malaysian military tracked Flight 370 but is dissembling. Clearly the authorities are not revealing the full extent of what is known.

3. Satellite imagery did not detect a high-altitude explosion.

This excludes all scenarios in which the aircraft crashes into another plane, explodes in mid-air, etc.

4. Flight 370 changed course and altitude, and then maintained the new bearing for hundreds of miles and an additional hour of flight after losing contact with ATC (air traffic control).

This limits scenarios in which decompression causes everyone on board to lose consciousness or a catastrophic electrical fire incapacitating the flight deck to an emergency that enabled the pilots to set a new course before losing consciousness or control of the aircraft. 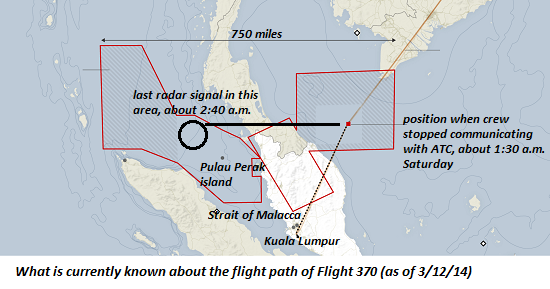 This conflicts with eyewitness accounts from fishermen reporting a large aircraft at a much lower altitude around 1,000 meters (3,000 feet). If the radar altitude is correct, this suggests the aircraft was not experiencing decompression, as the pilots would descend as an emergency response to decompression. If the fishermen’s report is accurate, then decompression would not be an issue.

6. Mobile phone data suggests the passengers’ phones were still functioning after the aircraft lost contact with air traffic control (ATC) and the transponder was turned off/failed.

The Strait of Malacca is a key shipping lanes chokepoint, and is thus of strategic interest to the U.S. and other nations with space-based assets. U.S. authorities have already revealed that U.S. coverage of the area is “thorough.”

That the head of the C.I.A. publicly professed ignorance is interesting. What course of action would one pursue if one wanted to keep U.S. capabilities secret? Publicly proclaim ignorance.

This is not to suggest that the U.S. “knows where flight 370 is;” it is simply to note that this is not “open ocean” comparable to the mid-Atlantic where Air France Flight 447 went down five years ago. This is a strategic chokepoint of great interest to the U.S., and therefore it is likely that U.S. networks and space-based assets collected data that would either exclude certain possibilities or make other possibilities more likely.

What can we logically conclude from the most reliable and trustworthy data available?

The aircraft was under the control of the pilots long enough for them to set a new course.

2. The aircraft flew an additional hour or more on the new westward course at cruising altitude.

3. No distress signal was sent during this 1+ hour flight after whatever event caused the the pilots to change course.

1. Pilot suicide. If the pilot had decided to commit suicide by crashing the plane, why not ditch the aircraft in the South China Sea? Why change course and fly for another hour?

Alternatively, the Malaysian military’s reports are completely false and they were tracking an unknown aircraft near Pulau Perak at 2:15 a.m. (previously reported as 2:40 a.m.)

How many unidentified large aircraft are flying around Pulau Perak at 2:15 a.m. on a typical night? The possibility that the radar signal was not Flight 370 seems remote.

2. Mechanical failure that caused decompression or an electrical fire that incapacitated the flight deck. If such an emergency occurred, it enabled the pilots to change course and altitude.

Assuming a decompression event, we could expect the pilots to descend rapidly. If Flight 370 was indeed at 29,500 feet at 2:15 a.m., that suggests the aircraft was still capable of flight at cruising altitude. So either the pilots were still flying the aircraft or the decompression event enabled them to change course and set the autopilot before losing consciousness.

If the aircraft was being flown by autopilot, it could have flown for many more hours, given its fuel load, which raises the question: if the pilots were unconscious at 2:15 a.m., why did the aircraft suddenly crash 10 minutes later?

If an emergency had crippled the aircraft’s electrical system, it’s unlikely the plane could have continued flying at cruising altitude for an additional hour. If a catastrophic electrical fire crippled the flight deck, how could the plane continue flying at cruising altitude for another hour, given that the battery backup would last at best 30 minutes?

In other words, the additional hour of flight time on a new course does not logically align with an emergency decompression or fire that led to the flight deck and pilots being incapacitated. A decompression event would have led to either A. a rapid controlled descent or B. the pilots unconscious/unable to take control and the autopilot flying the aircraft on the new course for many hours.

Alternatively, a catastrophic electrical fire would have either brought the aircraft down within minutes of the event or at best provided 30 minutes on emergency battery power. Neither jives with an additional hour of flight at cruising altitude.

This leads to the conclusion that the aircraft was still being flown by the pilots, i.e. conscious decisions were being made by either the pilots or someone who had seized control of the flight deck.

If a mechanical emergency had crippled the aircraft, it seems unlikely that the pilots could change course and altitude but not be able to send a distress signal. If the pilots had lost consciousness but the rest of the plane’s systems were nominal, the autopilot would have continued flying the aircraft until the fuel ran out, many hours beyond 2:15 a.m.

That suggests there was conscious control of the aircraft and that those in charge made a decision sometime after 2:15 a.m. that led to the loss of the aircraft. This scenario strongly suggests human action or error as the operative emergency rather than mechanical failure.

Either that, or some key data that has been released as fact is actually false.

Late breaking news: if the satellite images released by China (taken one day after Flight 370 went missing) are in fact photos of wreckage, then the Malaysian military was obviously not tracking Flight 370 to the west an hour later.

The blurry photo does not reveal much, but several features are noteworthy:

1. The three pieces are very large, which means they must be intact sections of the wings or fuselage. It is unlikely these would still be floating hours after a crash. We might also wonder, what sort of impact would create three large pieces rather than a debris field?

2. The three pieces are close together. Unless the aircraft landed intact in the water and sank in one piece, there would likely be a field of much smaller floating debris.

3. What else could this be? The large size of the pieces is certainly consistent with the scale of a 777.

4. Why did China withhold the imagery for three days? Did their own search ships reach the coordinates identified by the satellite?

5. The ocean currents and the location of the presumed debris do not compute. Ocean currents in the area are 2 kilometers/hour. Presumed debris is 141 miles from last known position This doesn’t compute: the satellite image was taken 11 am Sunday 33 hours after MH370 presumably crashed; debris would only drift 33 hr X 2 KM=66 KM or about 40 miles from the last known position of HM370. Debris was 140 miles to the east–100 miles beyond what’s possible in terms of debris drifting with currents from the presumed crash site.

In summary, these images open additional questions. There is no substitute for actually finding the aircraft or debris.

The Mystery of Malaysia Airlines Flight 370