Earlier this year I started to research what’s known as the “Vaccine Injury Trust Fund,” a “stash” of cash collected on every vaccine sold and given to children and adults in the USA.

That Trust Fund is “financed” by a $0.75 excise tax on each vaccine active recommended by the U.S. Centers for Disease Control and Prevention. On multi-valent vaccines, i.e., those containing more than one disease active e.g., trivalent vaccines like MMR, DTaP, etc., then 75 cents is paid for each valent, or a total of $2.25 for a 3-valent vaccine.

Now, here’s an interesting aspect: The U.S. Department of Treasury collects those excise taxes and also manages the Trust Fund’s investments. Investments? Sounds like there should be quite a stash in that Trust Fund portfolio since the U.S. Vaccine court has paid out just over $3 Billion [$3,159,410,649.38] [1] in claims and attorneys’ fees as of June 30, 2015. That got me to wondering what the Vaccine Injury Trust Fund is valued at; where the money is invested; and that there should be an accounting of public record posted on the Internet.

Keeping all the above facts, figures, and questions in mind, I decided to contact the Treasury Department to obtain just one figure or value: The asset balance of the Vaccine Injury Trust Fund as of the last fiscal year end. Searching Treasury’s contact page, I made email contact with a bureaucrat [not naming names], who forwarded my email to another bureaucrat who, in turn, forwarded my email to another bureaucrat who turned out to be somewhat helpful.

But, before I get to the “help” part, here’s what readers ought to know what I wanted:

“Would you please direct me to where I can obtain the current asset balance of the Vaccine Excise Tax Trust Fund that funds the HRSA / Vaccine Court awards. I can find the amounts of awards paid out over the years, but I’m having difficulty in finding how much has been paid into that Vaccine Excise Tax Trust Fund since its inception, over the years, and what its current asset value is/was as of 2014 or 2015 fiscal year. Thank you for your assistance and considerations to my request.”

Now, keep in mind these statistics according to VAERS: [2]

More than 10 million vaccines per year are given to children less than 1 year old, usually between 2 and 6 months of age. At this age, infants are at greatest risk for certain medical adverse events, including high fevers, seizures, and sudden infant death syndrome (SIDS). Some infants will experience these medical events shortly after a vaccination by coincidence.

Note “coincidence” is woven into Health and Human Services vaccine mythology. Can there be any correlation and causation, including coincidence, going on? I remember in the 1980s when vaccine mandates were being ramped up, as that’s when SIDS starting appearing on the medical radar. Coincidence! That’s what got me interested in investigating vaccines and tracking them, since I was hearing from physicians and clients about those “coincidences”.

Consider how many times mandated vaccines have been ramped up since 1953! Over three times the number of vaccines in the first six years of life—the most important life-systems-forming years, since many bodily functions are not fully developed, especially the immune system until around two years of age.

THREE TIMES AS MANY VACCINATIONS FOR CHILDREN

How much in excise taxes do all those vaccines contribute to the Trust Fund?

Below are the stats for millions of doses of seasonal flu vaccines distributed in the USA. In 2010, there were just over 160 million flu shots contributing excise taxes to the Trust Fund, plus the other ten years’ contributions. 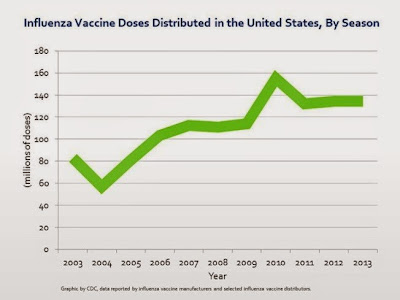 There are so many additionally-mandated-vaccines and their excise taxes that the numbers are amazingly impossible to calculate without a very sophisticated analytical computer program, which I don’t have. The two data sets above, though, ought to give readers some idea of the scope of vaccines sold in the USA along with the “excise taxes” collected by the U.S. Treasury. Trying to be conservative with what Treasury has collected as vaccine excise taxes since October 1, 1988 with only ‘nominal’ payouts for several years, therefore, the trust fund asset balance, I estimate, ought to be in the neighborhood of $50 Billion. That ain’t chopped liver!

The Department of Treasury collects the excise taxes and manages the Fund’s investments. [3]

Here’s where the fun begins.

Two bills were introduced into Congress: H.R. 6687 in the House of Representatives and S.3716 in the Senate. The House bill stated it was introduced to amend the Internal Revenue Code of 1986 to include vaccines against seasonal influenza within the definition of taxable vaccines.

Additionally, I quoted Jeryl Bier of Speak With Authority [1]

Although the taxes raised by the vaccine tax go into a ‘trust fund,’ this trust fund, like most government trust funds, is on paper only. According to the most recent report on the fund, November 2012, the balance in the fund is nearly $3.5 billion. (Since the program’s inception in 1988, the fund has paid out only $2.5 billion in 25 years for cases involving all vaccines, not just the flu vaccine. The balance in the fund could conceivably last another 25 years with no further tax revenue.) The $3.5 billion balance, of course, is ‘invested’ in ‘US Treasury Securities.’ In other words, financing a portion of the $16.5 trillion national debt.” [CJF emphasis added] [1]

However, something didn’t sift right with me, since the trust fund balance in 2012 was $3.5 Billion, and it was about the same amount at the end of fiscal 2014. What’s happened with all those excise taxes collected on every vaccine active distributed each and every year?

Transfers for certain repayments (A) In general The Secretary shall pay from time to time from the Vaccine Injury Compensation Trust Fund into the general fund of the Treasury amounts equivalent to amounts paid under section 4132 (b) and section 6416 with respect to the taxes imposed by section 4131. Source

So, the last bureaucrat at Treasury, who responded, was helpful insofar as I was sent an email with a link that proved rather interesting to me.

You mentioned that you were looking for the fund balance of the Vaccine Injury Excise Tax Trust fund. I believe I have located something in the ball park of what you are look for. Please review the link for the Bureau of Fiscal Service’s website as follows:

ftp://ftp.publicdebt.treas.gov/dfi/tfmb/dfivi0614.pdf. This balance information is as of June 30, 2014. Please let me know if this information was helpful to you at all. If so, I have a FOIA contact at Fiscal Service that I can put you in touch with.[CJF emphasis added]

Well, after accessing the pdf above, I had some very pointed questions to ask since some figures just didn’t seem to jive to my way of thinking, so I sent off a follow-up email that said:

Today, I finally was able to get time to study the file (Vaccine Injury Trust Fund) you kindly emailed me, and for which I thank you very much. However, I have some questions I’d like answered, as I seem to be confused.

Can someone confirm that my assumption is correct, please?

However, the Trial Balance for 6/30/14 on Page 4 shows an ending balance of ZERO, which means that at the end of Fiscal 6/30/14 the accounts carried forward would start over from zero on July 1, 2014, but accumulate balances going forward.

So, here’s what I don’t seem to understand, and can you or someone please explain in writing so I can “get it”: Were the over $3+ Billion in Investments in US Treasury Securities generated within the fiscal year July 1, 2013 to June 30, 2014? Or, is that $3+Billion Investments figure a cumulative figure from years past?

If the $3+Billion is just from FYE 6/30/14, then I would imagine that each year’s income/profit would be added to the portfolio investment with other balances and investments accruing from 1986 forward to the present. Or, doesn’t U.S. Treasury do that? Are the collected vaccine taxes, income, and investments written off to a zero balance each year with the vaccine tax money kept by the U.S. government and dispersed to other federal agencies or investments?

The figure that I’m looking for is the vaccine taxes collected on all vaccines sold in the USA that have been put into the Vaccine Injury TRUST Fund over 29 years and not balanced out to zero.

Thank you for pointing me in the correct direction to find that number. It’s only one number that I’m looking for, and that should be easy to find and provide, I would imagine. Thanks again for your help.

Needless to say, I’ve never heard back from any bureaucrat at Treasury, nor had anyone follow-up with me to file a Freedom of Information Act request. I wonder why. What happened to “If so, I have a FOIA contact at Fiscal Service that I can put you in touch with”?

However, this foray into vaccine excise taxes has left me with wondering what the real reason is behind having all adults receive ‘catch-up’ children’s vaccines. Are vaccines more of a hidden money-maker for Uncle Sam than anyone ever suspected? But, how is that money used? Off-budget?

Catherine J Frompovich (website) is a retired natural nutritionist who earned advanced degrees in Nutrition and Holistic Health Sciences, Certification in Orthomolecular Theory and Practice plus Paralegal Studies. Her work has been published in national and airline magazines since the early 1980s. Catherine authored numerous books on health issues along with co-authoring papers and monographs with physicians, nurses, and holistic healthcare professionals. She has been a consumer healthcare researcher 35 years and counting.