The narrative that Social Security, Medicare and pension funds invested in stocks and bonds can fund the retirement of 65 million people is a misleading fantasy. The sad reality is we can’t fund the enormous expense of retirement/healthcare for 20% of the populace out of our national earned income, and the savings that have been set aside are either fictitious (the Social Security Trust Fund) or based on phantom wealth created by speculative asset bubbles in stocks, bonds and real estate.

In the bogus “Trust Fund,” the cash has been siphoned off and spent on Federal government outlays. The Fund holds no cash. Instead, it has been given IOUs “backed by the full faith and credit of the United States,” the non-marketable securities.

Now what happens when the Social Security system redeems $100 billion of those securities? the Treasury goes out and borrows the $100 billion on the global bond market, and taxpayers are on the hook for the debt and the interest on that freshly issued debt.

This isn’t that difficult to understand, but let’s go through it again:

In a real Trust Fund, taxpayers pay in their cash, and the surplus cash is invested in marketable bonds–not IOUs, but real assets that pile up in the Trust Fund just like savings in a savings account. That cash is then withdrawn later, as needed, via the sale of bonds purchased with the cash. Taxpayers (employees and employers) pay nothing above and beyond their payroll taxes to fund Social Security.

Medicare is equally unsustainable: please read these for the full story:

The Problem with Social Security and Medicare (July 17, 2013)

Rather than face up to the reality that we face an impossible dilemma–either workers will be slowly impoverished by taxes that must go up to fund unrealistic retirement/healthcare promises, or those promises will have to be drastically scaled back–we have chosen to believe the happy illusion that inflating asset bubbles will painlessly conjure up enough phantom wealth to pay all those promises.

How can an unprecedented number of people (65 million Baby Boomers) all retire with unprecedented pension payouts and unprecedented healthcare expenses, and do so without raising taxes? Easy–just inflate asset bubbles that create trillions of dollars in magical wealth.

But as I explained in The Happy Story of Boomers Retiring on Their Generational Wealth Is Wrong (June 25, 2014), the assumption that there will be buyers of stocks, bonds and real estate at bubble-level valuations is not based on demographic realities.

Oh, and corporate profits can also rise indefinitely, too, even as earned income (as a share of gross domestic product–GDP) declines: 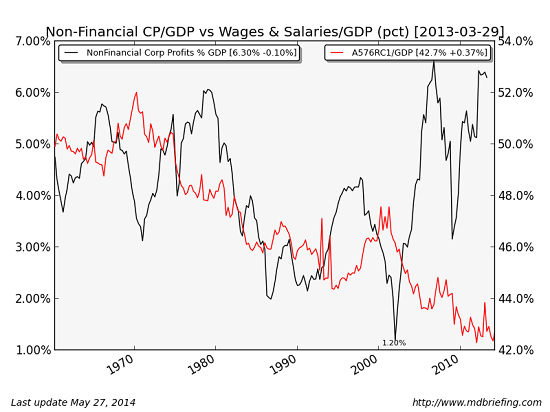 To tap this phantom wealth, assets must be sold at bubblicious valuations; this raise the question, Who Will Boomers Sell Their Stocks To? (June 23, 2014) 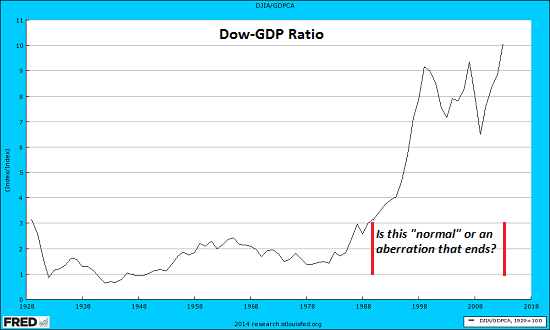 So if bonds decline by 50% as interest rates normalize (i.e. rise), and stocks fall 50% as corporate profits and central bank intervention normalize, and real estate declines 50% in most locales as declining wages meet rising interest rates, then what source of funding will replace the $30 trillion in phantom wealth that evaporated?

In sum, phantom wealth cannot possibly fund unprecedented retirement and healthcare promises. Only real wealth can do that, and central bank liquidity and the asset bubbles it inflates are not real wealth.