We live in a seemingly free country, so we’re told. But that may be because the majority of us have never spent time in a war zone or highly secured police state-like environment.

Few of us understand what it looks like when military and state intelligence assets take over.

Those who do understand, and have themselves implemented such plans in other countries, see exactly what’s going on and they are sounding the alarm (often falling on deaf ears).

In Concord, New Hampshire the local police chief has filed a requisition with the Department of Homeland Security to beef up his police force with a Ballistic Engineered Armored Response Counter Attack Truck to quell any disturbances initiated by activists or other potential domestic terrorists. In response, the residents held a city council meeting, prompting a retired Marine Colonel to weigh in.

He was formerly a coordinator tasked with manning, training and equipping the Iraqi Army throughout the northern provinces, and he candidly shares his insights and compares the nationwide lock-down in Iraq to what’s happening right here at home.

This is coming from someone who knows – someone who has seen exactly how a population is put under control by means of surveillance and force – and he suggests that what they did in Iraq is child’s play compared to what’s happening in the Land of the Free today.

My job was to man, train and equip the Iraqi Army in Al Anbar, Najaf, Karbala and the northern provinces… We did everything we could to make it as strong as possible.

I’ll tell you right now, homeland security would kick their butts in a week.

The way we do things in the military is called task organization. You take a command and then you attach units to it in order to accomplish the mission.

What’s happening is Homeland Security is pre-staging gear and equipment… what they’re trying to do is use standardized vehicles, standardized equipment.

I saw a picture of the Marathon bombing and there were two officers – they both had identical helmets, flack jackets, weapons… everything I wore in Iraq. 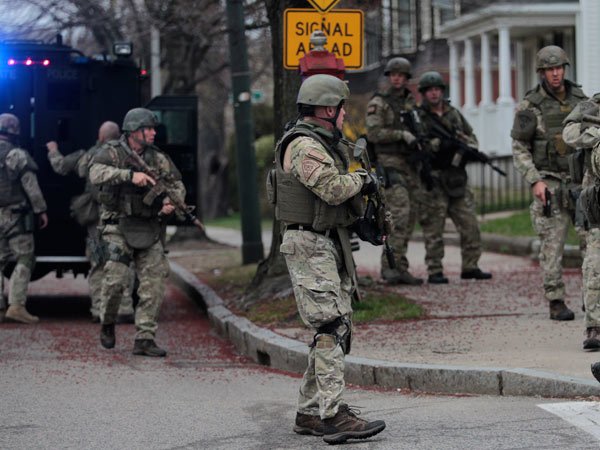 What we’re doing here – let’s not kid about it – we’re building a domestic army and we’re shrinking the military because the government is afraid of its own citizens.

I don’t know where we’re going to use this many vehicles and this many troops.

I can’t believe people aren’t seeing it. Is everybody blind?

While Americans go about their daily activities- sipping their $4 morning coffees, sharing their pictures on social media sites, talking about the latest draft prospects at the water cooler, and focusing their efforts on acquiring the latest and greatest mobile devices – a sinister government is hard at work behind the scenes to ensure complete access to every detail of our lives, as well as the heavy-handed means to control us should we step out of line.

America, according to Janet Napolitano’s Department of Homeland Security and the various forms of  ”secret” legislation passed by Congress, is now a domestic war zone, so it only makes sense that local police forces, in an effort to sidestep the restrictions set forth by the U.S. Constitution, are being heavily militarized to fight the new threat.

As noted by one DHS Insider, “it has already begun – you’re seeing it now.”

You are the target and millions of government personnel have been tasked with making sure you don’t step out of line by using any means necessary.