“[US Defense Secretary] Hagel and [US Chief of Staff General] Dempsey were walking a fine line … expressing concern while attempting to avoid the impression that the U.S. was manipulating events behind the scenes.” (Military.com, July 3, 2013)

The protest movement is directed against the US and its proxy Muslim Brotherhood regime.

The Muslim Brotherhood had been spearheaded into the government with the support of Washington as a “replacement” rather than an “alternative” to Hosni Mubarak, who had faithfully obeyed the orders of the Washington Consensus from the outset of his presidency.

While the Armed Forces have cracked down on the Muslim Brotherhood,  the Coup d’Etat is ultimately intended to manipulate the protest movement and prevent the accession of a “real people’s government”.  The overthrow of President Mohamed Morsi by the Egyptian Armed forces was not carried out against US interests, it was instigated to ensure “continuity” on behalf of Washington. 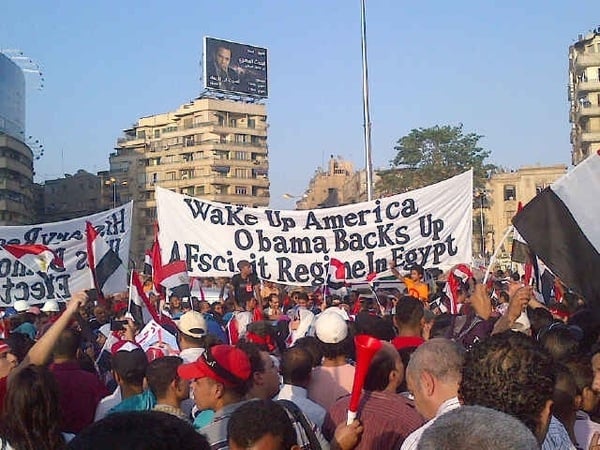 The Muslim Brotherhood and the CIA

These covert  links to the CIA were maintained throughout the government of Hosni Mubarak.

From the outset of the “Arab Spring”,  the Obama administration’s objective was to undermine secular governments in the Middle East and North Africa and install a model “Islamic State”, which would serve US geopolitical and corporate interests.

The protest movement against Mubarak in early 2011 was in response to the devastating impacts of  IMF reforms. Initiated at the height of the Gulf War in early 1991,  these reforms –which span over a period of more than 20 years– have served to impoverish the Egyptian people, while also “opening up” the Egyptian economy to the influx of  “foreign investors”.

The Nile Valley which was Egypt’s breadbasket for more than 3000 years was destroyed in favor of food imports from the US and the European Union.

Continuity pertaining to neoliberal economic reform is central to US sponsored regime change.  Morsi’s accession to the presidency was conditional upon his acceptance of IMF “economic medicine”.

In August 2012, IMF Managing Director Christine Lagarde stated candidly that “The IMF will accompany Egypt as it undertakes this challenging journey… It’s an Egyptian journey and the IMF is a partner in that journey.”

“We are impressed by the strategy that President Morsi and Prime Minister Kandil have proposed during our meetings today,” Lagarde said at a press conference attended jointly by Kandil. (IMF, August 22, 2012)

A new IMF package of (deadly) macro-economic reforms was launched with a view to “managing Egypt’s political and economic transition” (Ibid). The resulting IMF sponsored “transition” imposed by Egypt’s external creditors has served to exacerbate rather than alleviate the economic and social crisis.

Social conditions have deteriorated dramatically since the demise of Hosni Mubarak. The mass protest movement against President Morsi was in large part motivated by the fact that the Mubarak era macro-economic reforms imposed by Washington and Wall Street continued to prevail,  leading to a further process of impoverishment.

The Role of the Armed Forces: “Green Light” from the Pentagon?

The media has portrayed the Egyptian armed forces as broadly “supportive” of  the protest movement, without addressing the close relationship between the leaders behind the military coup and their US counterparts.

The fact that segments of the mass movement called for the armed forces to play a “supportive role”, is an obvious ploy:

This is the message that the armed forces received from all over urban Egypt, its cities, and its villages; it (the military) recognized the invitation, understood its intentions, appreciated its necessity and got closer to the national scene hoping, willing and abiding by all limits of duty, responsibility and honesty. 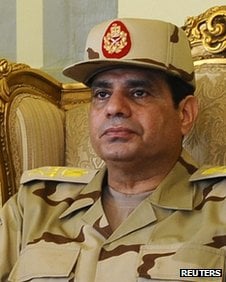 Known and documented, the mass movement has been infiltrated.  Sectors of the opposition to the Muslim Brotherhood government are supported by the National Endowment for Democracy (NED) and Freedom House. The Kifaya civil society movement, is supported by the US based International Center for Non-Violent Conflict.

The role of the armed forces is not to protect a grassroots movement. Quite the opposite: the objective is to manipulate the uprising and quell dissent on behalf of Washington.

The objective  of the military takeover is to ensure that the downfall of the Muslim Brotherhood government does not result in a political transition which undermines US control over the Egyptian State and military.

Let us be under no illusions.  While there are important divisions within the military, Egypt’s top brass ultimately take their orders from the Pentagon.

Defense Minister General Abdul Fatah Al-Sisi (left), who instigated the Coup d’Etat directed against President Morsi is a graduate of the US War College, Carlisle, Pennsylvania .

General Al Sisi was in permanent liaison by telephone with US Defense Secretary Chuck Hagel  (right together with Al Sisi) from the very outset of the protest movement. Press reports confirm that he consulted him several times in the days leading up to the Coup d’Etat.  It is highly unlikely that General Al Sisi would have acted without a ‘green light” from the Pentagon. 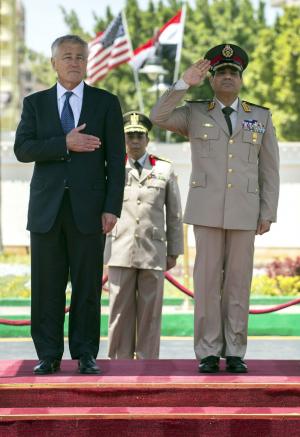 Hagel phoned al-Sisi last Thursday [June 30th] as the huge demonstrations calling for Morsi’s ouster took on an increasingly anti-U.S. tone, and spoke with him again on Tuesday [July 2] after al-Sisi delivered an ultimatum warning that the military would act if Morsi failed to make concessions. Military.com,

In turn General Martin Dempsey, chairman of the US Joint Chiefs of Staff, was in permanent contact with his counterpart General Sedki Sobhi,  chief of staff of Egypt’s Supreme Council of the Armed Forces (SCAF):

Pentagon officials declined to give specifics on the conversations between Hagel and al-Sisi, but chief Pentagon spokesman George Little said that “US officials at all levels [of the military] have made it clear that we support the democratic processin Egypt and that we hope that this period of tension can be resolved in a peaceful manner and that violence can be avoided. … (Military.com, op cit, emphasis added)

According to Military.com,  Hagel and Dempsey “were walking a fine line” … “expressing concern while attempting to avoid the impression that the U.S. was manipulating events behind the scenes.”

Egypt is the largest recipient of US military aid after Israel.

The Egyptian military is controlled by the Pentagon.

In the words of General Anthony Zinni, former Commander of US Central Command(CENTCOM):

“Egypt is the most important country in my area of responsibility because of the access it gives me to the region.”(emphasis added)

Continue Reading
You may also like...
Related Topics:backing, egypt, Mubarak, Muslim Brotherhood, US