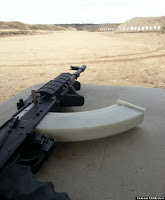 This is an update to Defense Distributed’s ongoing progress with 3D printed weapons.

The eyes of the world are on the innovation of 3D printing. Naturally, whenever a new technology is created that offers open source DIY opportunities to the average individual, it is going to make governments and their protected corporate interests very nervous.

Such is the case with 3D weapons manufacturing. Defense Distributed has been offering sets of computer files for free through their DEFCAD online library. Their progress is documented below in a series of video updates the company has posted.

Following on the heels of their homage to gun control advocates such as Andrew Cuomo and Dianne Feinstein, the ATF has granted Defense Distributed the Type 7 Federal Firearms License that the company had been seeking over the last 6 months. However, there is one more step before they will be able to go full throttle:

Wilson will not actually be able to manufacture and sell guns until he receives a Class 2 Special Occupational Taxpayer add-on to his FFL. (Source)

As you will read below, the corporate media has begun to focus on Defense Distributed’s founder Cody Wilson and his political views and statements in what could be the start of a serious campaign of demonization.

Wilson explains to ArsTechnica what the newly obtained Type 7 License enables him to do:

“The big thing it allows me to do is that it makes me [a manufacturer] under the law—everything that manufacturers are allowed to do,” he told Ars. “I can sell some of the pieces that we’ve been making. I can do firearms transactions and transport.”

The license is pictured below:

Ars details the next step in the licensing process that will propel Defense Distributed into full-fledged manufacturing and sales, even for automatic weapons:

Currently, Wilson said he will not actually begin manufacturing and selling guns until he receives an “add-on” to his FFL, known as a Class 2 Special Occupational Taxpayer (SOT), as licensed under federal law (PDF). This would allow him to manufacture and deal a broader range of firearms under the National Firearms Act. The Class 2 SOT would grant Wilson the ability to manufacture, for example, a fully-automatic rifle. Wilson applied for the SOT on Saturday and expects to receive approval within a few weeks.

However, some of Cody Wilson’s previous statements, which can be read below, were directed toward specific politicians, including his brash guarantee of success in thwarting any and all gun control measures by stating “good f—ing luck.” In so doing, he seems to have drawn some ire from the mainstream media.

NBC chose to title this news, which they sourced from The Verge’s dryly titled “Defense Distributed gets license to make and sell 3D printed guns,” to something quite different altogether, “ATF grants ‘crypto-anarchist’ license for 3-D printing of guns” – highlighting part of the description from his Facebook page. The article goes on to characterize Defense Distributed as a “loosely organized group” where Wilson “IS” the group. 3D printing is couched in the following manner:

some of its more notable efforts so far have been for medical, space and scientific projects, including helping repair broken bones and building spacecraft parts, as well as commercial efforts including athletic shoes.

The implication appearing to be that 3D weapons manufacturing is not to be included in that list of beneficent uses. It remains to be seen if other mainstream outlets will follow suit and make 3D weapons out to be the next great threat to freedom, rather than one of the cornerstones of preserving it.

“We want to commemorate a personal failure of Feinstein’s to take away semi-automatic weapons,” Wilson, who is also a law student in Austin, Texas, told The Huffington Post. (Source)

The ongoing homage to the futility of full gun-control follows an earlier AR-15 magazine called the “Cuomo.”

Defense Distributed has consistently lashed out at attempts to offer legislation to ban 3D weapons printing, such as that of New York Congressman, Steve Israel. Congressman Israel has sought to criminalize 3D weapons, to which Cody Wilson responded succinctly, “good f***ing luck”. Their latest video offers evidence that efforts are moving forward…

The early media attention resulted in Wikiweapon company Stratasys, Inc. seizing Defense Distributed’s equipment and taking issue with their decentralized methods. But the genie is already out of the bottle — downloads have topped 500,000. After some initial stutter-stepping with structural failures, their latest incarnations heralds the arrival of 3D printed semi-automatic and automatic weapons.

Last year, his group famously demonstrated that it could use a 3D-printed “lower” for an AR-15 semi-automatic rifle—but the gun failed after six rounds. Now, after some re-tooling, Defense Distributed has shown that it has fixed the design flaws and a gun using its lower can seemingly fire for quite a while. (The AR-15 is the civilian version of the military M16 rifle.) [Source]

The results can be seen in part 3 of their ongoing video series chronicling their development and improvement. Over 600 rounds of .223 ammunition are fired without fail using a 3D-printed “lower” for an AR-15, with Wilson stating that it likely could have gone to 1,000.

The ability for anyone to print a weapon could be one of the cornerstones for widespread freedom and resistance to top-down tyranny. Lawmakers such as Steve Israel have stated that any restrictions on 3D printing of weapons will be very difficult if not impossible to enforce, and the Justice Department has so far backed up their legality. As Tony Cartalucci has stated, it renders gun control moot; one would have to basically ban any personal use of 3D printers.

Preventing people from manufacturing guns, or worse yet, from possessing or using tools that can be used to create guns, is both ludicrous and impossible. Like with cars or anything else, laws are there to ensure we don’t harm others by abusing any given right or implement – not preventing us from having those rights or implements responsibly in the first place.

As the cost of production goes down, and states continue to assert their inherent rights to govern without federal interference, there will likely be a wave of non-profit and for-profit manufacturers alike, as Wilson states:

The law student said that anyone with the same type of 3D printer (“SLA resin and P400 ABS on a used Dimension”) could replicate his efforts with “9 to 12 hours” of print time and “$150 to $200” in parts. “We’ve proven that you can build one for $50,” he said, presuming the builder is using lower quality materials. (Dimensions typically sell in the $30,000 range—but Wilson says his results could be duplicated using the less-expensive Ultimaker ($1,500) or Reprap.”

With the ability for anyone, anywhere to be able to defend oneself and mobilize quickly against a growing threat, governments would have to think twice before heading down the road to tyranny. Certainly the government itself has signed on to 3D manufacturing. As reported by The Singularity Hub, the Army is deploying $2.8 million fabrication labs to the frontlines as part of an overall 3-year contract with Exponent, Inc. worth $9.7 million. The intention is to make this global.

While this video focuses on other aspects of 3D printing, and injects the well-worn marketing line that all of this will save lives in humanitarian efforts, to think this will not be used to produce guns and even drones would be naive, since Stratasys — the manufacturer that gave Defense Distributed such a hard time — is fully signed on to assist the military-industrial complex.

However, it appears that the everyday consumer (taxpayer) will not have to wait for military tech to trickle down to offer its scraps; the benefits of 3D printing are taking on a life of their own with or without government approval.