Finally, we might be getting somewhere with this ridiculous scandal. Congress has been working on this for a year without much success, but on Thursday and Friday, the two U.S. District court judges ordered the IRS to start providing some answers.

On Thursday, U.S. District Judge Emmet G. Sullivan ordered the IRS to provide – within a month – a declaration explaining exactly how the agency managed to “lose” two years’ worth of emails belonging to Lois Lerner.

Sullivan issued the order as part of a Freedom of Information Act lawsuit by Judicial Watch, a non-partisan watchdog group. He said the IRS declaration must be signed, under oath, by the appropriate IRS official.

Judge Sullivan also assigned John Facciola, a federal magistrate, to conduct his own query into whether there may be another way to obtain Lerner’s emails.

From The Daily Signal:

In the Judicial Watch case, Judge Sullivan ordered the IRS and the watchdog group to work cooperatively with another federal judge to recover Lerner’s emails, which IRS officials have said were destroyed when a computer hard drive crashed.

On Friday, in a hearing examining a lawsuit brought by True the Vote, Judge Reggie Walton gave the IRS until July 18 to find out what happened to the crashed hard drive responsible for erasing two years worth of Lerner’s emails. He also wants to know if the hard drive is traceable through a serial number.

If the information is gone, Walton said he wants an affidavit written under penalty of perjury by an IRS IT professional with “firsthand knowledge” of the situation, reports Politico.

Things aren’t looking good for Lerner at all, especially in light of two recent developments:

Darrell Issa has tweeted out an email exchange involving Lois Lerner in April 2013, in which she attempts to scope out what email records get retained, and cautions that because Congress may seek emails, “we need to be cautious about what we say in emails”.

Here is that email exchange: 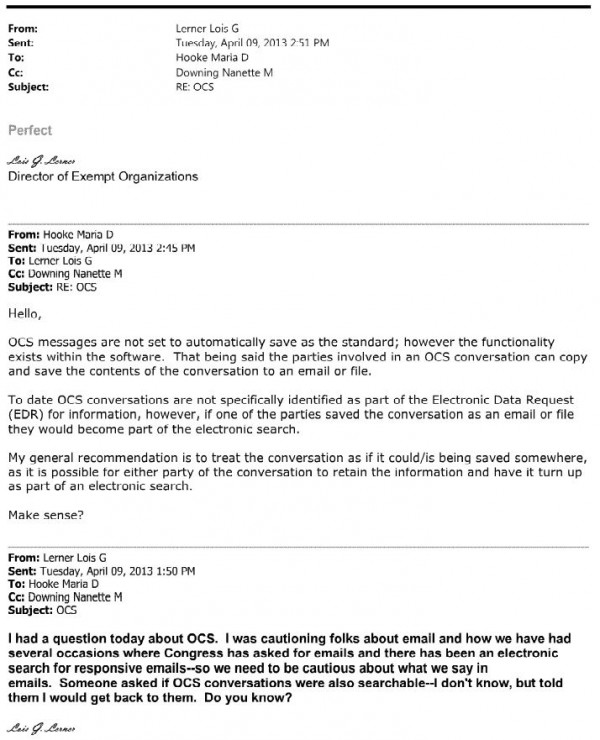 This portion of the exchange suggests that emails point to IRS officials using instant messages:

The revelation adds to lawmakers’ concerns about the agency’s handling of documents related to their current inquiry into the agency’s alleged targeting of conservative tea-party groups for burdensome scrutiny as they sought tax-exempt status. Republicans already have criticized the IRS for losing about two years’ worth of emails that could be important to the probe, largely because a computer hard drive belonging to a former top IRS official, Lois Lerner, crashed in mid-2011. Backup tapes also were routinely reused after six months.

Oops. Lerner isn’t the sharpest tool in the shed, is she?

To add to her troubles, on Thursday, Texas Republican Rep. Steve Stockman filed a resolution demanding that the House use a little-exercised power to arrest Lerner.

From his press release:

“Asking the Justice Department to prosecute Lois Lerner for admittedly illegal activity is a joke.  The Obama administration will not prosecute the Obama administration.  How much longer will the House allow itself to be mocked?  It is up to this House to uphold the rule of law and hold accountable those who illegally targeted American citizens for simply having different ideas than the President.

Democrats have openly stated the House has the powers to arrest those in contempt of Congress and imprison them in the Capitol.  I don’t want to go as far as Democrats in exercising the House’s powers to arrest.  Ms. Lerner will be held in the D.C. jail.

Under the resolution Lerner would be held in the D.C. jail and would have full legal rights and access to an attorney.

It’s time to for House to stop tacitly endorsing this administration’s illegal activity by refusing to hold him accountable.  I expect Democrats to defend and even praise criminal activity.  The question is whether Republican leadership will join them in mocking the House and breaking the law.”

Finally, the pressure is on the IRS to provide answers – and hopefully, be forced to answer TO – the allegations of targeting certain groups.