Those betting on a fourth bubble of even greater extremes will find their time at bat has come to an end.

The conventional investment wisdom holds that central banks will never let markets decline. This is an interesting belief, given that two previous asset bubbles based on central bank “easy money” both imploded, impoverishing believers in central bank omnipotence.

So perhaps we can say that the conventional investment wisdom holds that any asset bubble that bursts will quickly be reflated into an even more extreme asset bubble. That’s certainly been the history of the past 17 years.

But there’s a case to be made that bubbles are like strikes, and you only get three. A recent article, Deutsche: “We Are Almost At The Point Beyond Which There Will Be No More Bubbles”, made a nuanced case for “3 bubbles and you’re out” based on volatility and other inputs.

I propose a much simpler case for “3 bubbles and you’re out”:

1. Every policy yields diminishing returns as the positive results follow an S-curve.
2. What every trader knows no longer has any predictive power.
3. Policy extremes have become normalized, leaving central banks with unintended and unpredictable consequences should they push even more extreme policies in the next bubble burst.

Radical new central bank policies work wonders in the initial boost phase (see diagram below) because the sums being deployed are so large and the policy is so extreme: quantitative easing / purchase of assets by central banks, for example: never before have central banks conjured trillions of dollars, yuan, yen and euros out of thin air and used this new currency to buy bonds, stocks and debt instruments in vast quantities for eight years running.

But over time, the novelty and effectiveness of the radical policies wear off. Participants habituate to the policies, which become a given that can not be removed without disrupting the markets.

Traders are always seeking an edge, and front-running central bank policy has proven to be a very effective strategy. But once everyone starts using the same strategy, it stops working. Put another way, there’s no predictive power left in what everyone knows.

Eventually, everyone is on the same side of every trade. At that point, there is only one movement left–a reversal that catches everyone by surprise. 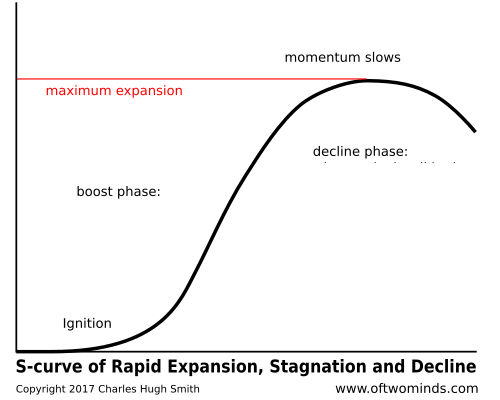 The third dynamic is that central banks are visibly getting nervous about the unintended and unpredictable consequences of their extreme policies. It’s all fun and games when central banks are buying trillions of assets with money created out of thin air, but how do you stop the asset purchases when everyone depends on them as the foundation of the markets?

Are there no consequences from holding interest rates near zero for eight long years?

What about political blowback from the rising wealth inequality that central banks have fueled?

Policy extremes trigger unintended consequences as a result of being extreme. You can’t throw around trillions and not generate expectations, incentives and blowback from those who don’t benefit from the extreme policies.

Central banks don’t control the consequences of their policies. If they respond to the popping of the current bubble with tens of trillions in new asset purchases, they might find this policy is nowhere near as effective as when it was unleashed in 2008.

Once markets grasp that central banks have lost control of the consequences of their policies, confidence, faith and trust in central banks “saving the day” will evaporate. The likely result of this realization is that markets will plummet to new lows rather than reach new highs.

Three bubbles/strikes and you’re out. Those betting on a fourth bubble of even greater extremes will find their time at bat has come to an end.

Read the first section for free in PDF format.