How long will it be before they actually start shooting us from helicopter gunships a la The Running Man?

In that movie, Arnold Schwarzennegger plays Ben Richards – pilot of a gunship who actually refuses to spray a crowd of helpless people with his mini-gun. For his refusal to be brutal, he is turned into a contestant on The Running Man, where he must fight for his life against a series of gladiators for the amusement of the crowd.

Is it not amazing how predictive so many mass-market films have proved to be? Only in this case, the real-life ‘copter pilots are itching to mow us down. See, for instance, the recent “drills” in Florida and Texas – video seen below, for instance- where civilian areas were overflown by military choppers firing blanks. To trainthem. More precisely, to acclimate them to the idea of raining death down on Americans.

Everything’s ramping up; you have to be willfully oblivious to not see it.

And here’s the latest: In this video above, a woman is seen committing the highly suspect and probably terroristic  act of taking a walk in the San Bernardino, CA desert, just off a major highway….from the vantage point of Officer Unfriendly in his taxpayer-funded whirlybird. The airborne enforcer menaces the woman from above, repeatedly buzzing her at treetop (if there were any trees) altitude before setting his ‘bird down like it’s Vietnam all over and the only thing missing is speakers blaring Ride of the Valkyries. He struts forward authoritatively – suited up just like Lt. Col. Kilgore in his special costume. You know, the one that gives him sanction to brutalize people. Which he proceeds to do: 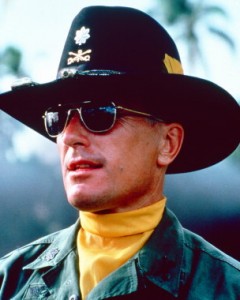 When the woman then explains that she doesn’t have ID – and why the heck should she? She’s not driving, after all… she’s merely walking about and not on private property or restricted property, either. But going for a walk is now apparently suspicious. Sufficiently suspicious to justify (in the minds of these real-life Lt. Col. Kilgores) a combat-style landing followed up with a proper rousting. Not just ihre papierien, bitte! (and please, stop it already with the canned niceities; there’s no choice for us in the matter) . The thug also performs a Fourth Amendment-free physical search (without consent) rummaging through her purse and ordering her not to put her hands in her pockets.

How much more of this will we agree to accept? At what point will we refuse to accept any more?

Events are building to a sickening crescendo. All proportionality has been thrown out the window in the name – ironically, tragically – of “keeping us safe.” The enforcers are not merely brutal, they are hysterical in their over-reaching, over-the-top, immediate escalation of trivialities into potentially catastrophic events. Events that, one of these days, will get out of hand. For them as much as us. More so for them, I expect. 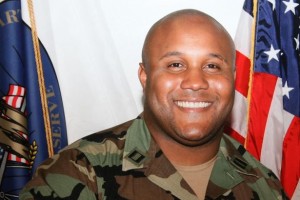 Bullies eventually get their due. It festers… it is sublimated. But one fine day, all hell breaks loose. A berserker fury is unleashed. And once unleashed, god help us all.

We already see this happening – even among their own kind. See, for instance, the case of ex-Enforcer now wanted murderer LA cop Christopher Dorner (read his manifesto here). He has gone on a manhunt… for his fellow enforcers. How many ordinary people are – right now – on the verge? How much more will it take to set some of them off?

It’s all beginning to become unglued.

What was it H.G. Wells reportedly said toward the end of his life (though in a different context)?

God damn you all. I told you so.