I’ve written about this little known Puerto Rico trench before, but it’s worth repeating. Especially now, because the quakes in the trench zone are getting not just more frequent, but stronger.

It was startling to find out just how massive and deep this fault line trench is. The consequences of a substantial subterranean landslide and resultant tsunami on the entire heavily populated low-lying island region of the Caribbean is almost unfathomable. And there’s hardly any talk about that lurking danger.

In case you haven’t noticed, the “authorities” don’t seem to want us to be aware of how tentative things are and the imminent dangers we face. Whether it’s earthquake activity, radiation releases, or geoengineering insanity wrecking the planet, we’re supposed to just trudge along with our heads down and not notice.

Recent Uptick in Seismic Activity on the Trench

You’ll notice above that the size of the quakes on the fault has been increasing over the past week. It’s fairly “normal” to see regular activity in this region, but this increase in magnitude is unusual and something to take note of.

About the Trench – Evidence of Enormous Submarine Landslide:

The National Oceanic and Atmospheric Administration (NOAA) states that the Puerto Rico Trench is the deepest part of the Atlantic Ocean, with water depths exceeding 5.2 miles! The Puerto Rico Trench is also associated with the most negative gravity anomaly on earth, -380 milliGal, which indicates the presence of an active downward force.
The region is located on an active plate boundary zone between the North American plate and the northeast corner of the Caribbean plate. The North American tectonic plate is descending under Puerto Rico and the Virgin Islands, south of the trench.
The results of studies involving mapping and seismic profiling of the sea floor off Puerto Rico’s northern shore, have uncovered evidence of an enormous submarine landslide. The the suspect slide extends across roughly 35 square miles, and evidence indicates that a slide of this size would have involved approximately 620 cubic miles of material!
Assuming that the slide occurred as a single event, an underwater slide of this magnitude would have generated a tsunami of frightening proportions. The effects of such a tsunami on present day Puerto Rico would be disastrous, and considering that the region is still tectonically active, an event like this could likely occur again at some point in the future. Source 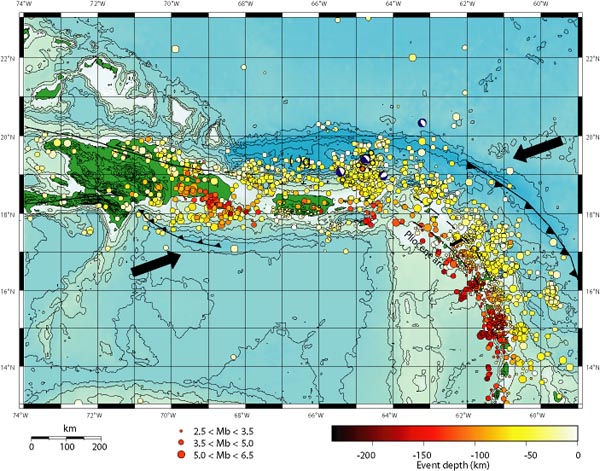 Figure 2. Location of earthquakes as a function of depth and size in the northeastern Caribbean

The arrows in the map above show the direction the underlying Caribbean tectonic plates are moving, with the resultant build-up of pressure releasing into a myrid of earthquakes in the region over the years. Puerto Rico is the smaller green island in the middle, with the Dominican Republic the larger island to the left. The string of other Caribbean islands is buried under the earthquake markers that flow down the page to the lower right.

You can see the Puerto Rico Trench wraps around the entire zone.

A few little known facts came to the fore as I was researching this area after spotting the recent increase in seismic activity in the Caribbean region.

1. The Puerto Rico Trench is the biggest and deepest such trench in the entire Atlantic ocean.

2. This trench is capable of producing 8.0 earthquakes and above.

3. The risk of a major quake, underwater landslide and mega tsunami are as great as that of the Seattle area. In fact, one recent risk assessment put it at 35 to 55%!

4. The zone hasn’t ruptured in over 200 years and that has geologists seriously concerned.

In other words, something major will happen. No one knows when, but it will happen, as it has in the past there.

Add that to the fact that 35 million people live in surrounding low lying areas and you have a monumental disaster just waiting to happen.

Seismic activity is constant in the region, perched on the trench precipice.

But Why No Warning?

What struck is that in everything I’m reading, it’s admitted this risk is huge but it’s hardly known in the area. Even Wikipedia admits:

Knowledge of the earthquake and tsunami risks has not been widespread among the general public of the islands located near the trench.

Why? Would it negatively impact the local economy, much like the idiot mayor’s development worries in the movie Jaws? Are there really such people in charge?

Well, look at the Gulf oil disaster and Fukushima for starters. I don’t think the concern is anyone’s health or well being – it’s preserving the status quo while the disasters take their toll as quietly as possible.

We May Not Know When, But People Should Be Prepared

I watched a moving and very insightful movie called “Tsunami – Caught On Camera” that is really worth viewing. It shows the psychology of human reactions to disaster. It’s a gripping and heart rending tale of several families and individuals who endured the catastrophic effects of the 2004 tsunami in several heavily hit locations.

The human spirit is so beautiful, through triumph and tragedy.

What baffled me was how even locals in some of these locations didn’t realize that when the sea retreats way out, leaving boats stranded and fish flapping on the sand and rocks, something big is coming and you should head for the hills. In some cases people were sleeping or there was very little warning. But I found this disturbing that people didn’t know this clear sign of a tsunami approaching.

But people in 2004 were completely caught unawares. When the tide went out many gathered at various beaches to see what the fuss was all about. When It started coming in and rising so quickly some thought it was cool and still had no idea. Not everybody missed the warning and some did try to warn others, but in general there was a real lack of awareness.

Are people really so ignorant of the world around them in this day and age? After this event I think the world learned a lot, perhaps. The Fukushima tsunami was a strange phenomenon that gave no warnings as to its massive size except the preceding quake, which was semi-routine tor them. Even the quake damage in Fukushima was hard to spot so they just kept about their ways until the ocean just rose and swallowed them up.

Very strange when the Japanese are very alert about this phenomenon and the potential effects from quakes.

We Need To Stay Tuned, Conscious and Continue to Inform

The Powers That Be are not about informing or empowering the people, as you have probably learned. There are wonderful researchers and groups trying to help people take real threats like these seriously, but it’s in spite of the government, not because of them.

If people realize they need to stay conscious and informed on their own and not expect the media to tell them what to do, they can stay a step ahead, or at least know how to read the signs of the times and react in a conscious way.

But be prepared and keep informing others. Information is empowering.