Trea-son [tree-zuhn]:  The betrayal of one’s own country by waging war against it or by consciously or purposely acting to aid its enemies.

If Patriots had a “most wanted” list, these people would be at the top of it.

The alleged crimes of this Dirty Dozen? Betraying the American people from within by wantonly dismantling the Constitution, collapsing the economy, and creating an encroaching police state that rewards the few and restricts the many. Each and every person on this list could rightfully be investigated for Treason against the United States of America.

This Gallery of Dishonor is by no means inclusive. It contains, in alphabetical order, some of the most despicable but certainly not all.

Meet the Patriot’s Most Wanted:

Ben Bernanke, collapsing the economy since 2006. He became the Chairman of the Federal Reserve under Bush and has maintained his appointment under Obama (unusual in that a Republican appointment continued to serve under a Democrat president). Mr. QE-to-Infinity has recently received a license to print money indefinitely to institute the most recent round of Quantitative Easing, which Senator Ron Paul referred to as a “full-time counterfeiting operation”. Unfortunately the only ones eased by this are the members of the Big Banking Cartel –everyday folks need not apply.  Under Bernanke’s leadership, the “too-big-to-fail” banks were financially bailed out, while the average American was left to flounder as housing values plummeted, mortgages were defaulted on and personal bankruptcies skyrocketed.

New York City’s very own soda pop Nazi, Mayor Michael Bloomberg has made a career out of micromanaging the lives of the citizens of the city. Bloomberg has decided that he must take control of the health of New York City residents and has done so by disallowing the sale of sugary beverages over 16 ounces. He also had NYC hospitals lock up baby formula and track when formula is dispensed in an effort to coerce new mothers to exclusively breastfeed. And speaking of new mothers, there have been numerous quiet sexual harassment lawsuits filed against Bloomberg by women under his employ, dating back to 1997, when a female employ described telling Bloomberg of an unplanned pregnancy, to which he allegedly responded “Kill it!” and “Great, number 16!” (Not treason, but saying that type of thing would certainly be indicative of a man’s character.)  Back to treason, last summer, Bloomberg stated the NYPD officers should go on strike until the citizens voluntarily disarmed themselves. Under his “leadership” New York City has the strictest gun laws in the state, requiring permits, licensing and registration. This left the citizenry largely disarmed and unable to protect themselves in the aftermath of Hurricane Sandy. Never one to let a good crisis go to waste, Bloomberg rounded up celebrities to  put together a propaganda video calling out for even more gun control just days after the tragedy at Sandy Hook Elementary School. 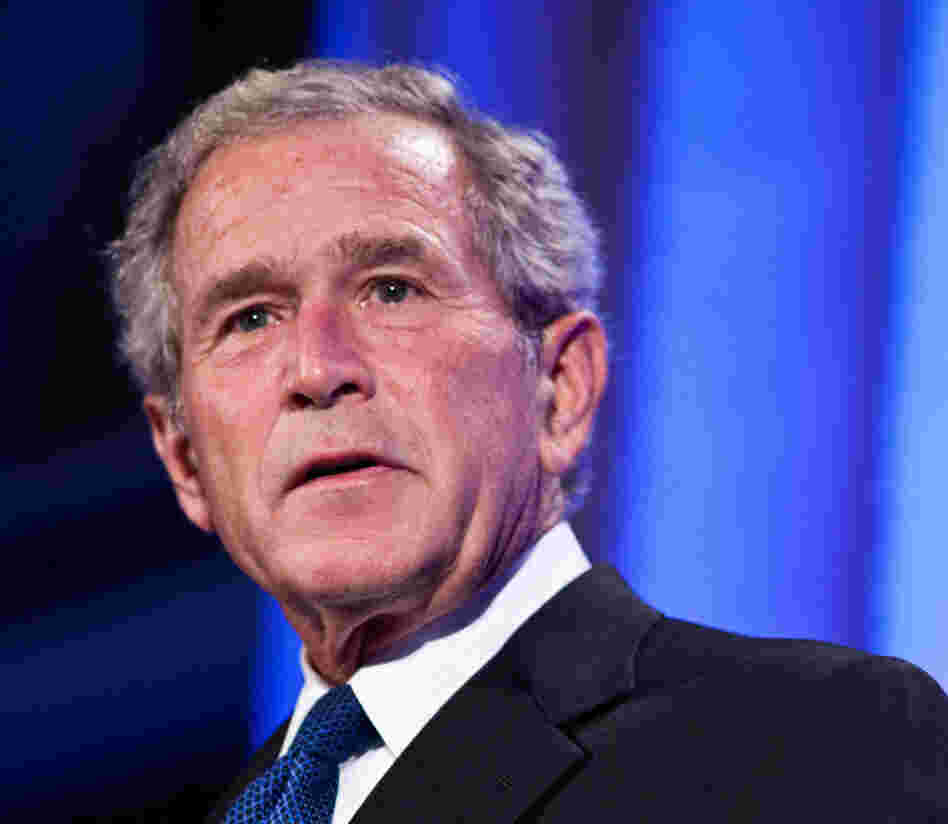 It was under the watch of erstwhile President Bush that the largest terrorist act in American history took place in our own airspace on September 11, 2001. This inside job was rapidly followed by the “Patriot Act” – in truth the most unpatriotic legislation that had existed up to that point and the first serious blow suffered by the Constitution. The Patriot Act was rolled out to save America from terrorists, allowing surveillance and invasions of privacy without the hassle of pesky little inconveniences like probable cause and search warrants. Bush and 7 of his cohorts (Dick Cheney, Donald Rumsfeld and their legal advisers Alberto Gonzales, David Addington, William Haynes, Jay Bybee and John Yoo) were find guilty in absentia last year in Malaysia, convicted of war crimes, including torture and cruel, inhumane and degrading treatment in Iraq and Afghanistan.

Long-suffering wife of former President Bill Clinton, former Senator from New York and current Secretary of State, Hillary Clinton has had a varied political career. Recently on the hook for the Benghazi massacre, in which 4 Americans lost their lives due to negligence, she has been in the hotseat numerous other times. A noted warmonger, she has been accused of lying to Congress about the Iraq War and Saddam Hussein, she has consistently expressed her belief that Iran is a nuclear threat to the United States and has been fingered by Wikileaks for ordering spying on UN Officials. Other possible lapses in integrity include allegations of lying to the FEC about contributions, the hiring of unsavory advisor Sandy Berger (a convicted felon) and substantial financial involvement with pharmaceutical companies, whose causes she champions.

Neck deep in government and banking, Jon Corzine was accused of using  1.6 billion dollars of customer money to cover his company’s shortfalls. Yes, 1.6 BILLION. Shortly thereafter, the company, MF Global filed for bankruptcy and that money has completely vaporized. A House Congressional hearing found the former New Jersey senator and governor at fault for the failure of the company, but he has managed to evade criminal charges. (Could that be related to the fact that Eric Holder’s former law firm represented Corzine’s now-defunct company?)

Mayor of Obama’s old stomping ground, Chicago, Emanuel’s city has dubious honor of being simultaneously crowned the gun control capitol of the United States and the Homicide Capitol of the United States. Classic Emanuel quote: “If you are known as maybe a possible terrorist you cannot buy a handgun in America.”  Emanuel served on the board of the Freddie Mac while Bill Clinton was in office, during which time the organization was plagued with scandals involving campaign contributions and accounting irregularities. Currently, Emanuel is browbeating banks with Mafia tactics to “suggest” that they cease lending money to gun manufacturers with accounts in good standing.

Possibly the most hated woman in Congress right now, Dianne Feinstein has made no bones about her mission to disarm America. The senior Senator from California was responsible for the 1995 Assault Weapons Ban and  has just introduced a bill that would  prohibit the manufacture or importation of 158 specific military-style “assault” rifles, ban magazines of more than 10 rounds and introduce a  federal registry for all  owners who currently possess the aforementioned weapons and magazines. She has supported the extension of the Patriot Act and was the co-sponsor of PIPA, one of several assaults on internet freedom.

US Attorney General Eric Holder is all about the law, at least if those laws apply to other people. As for himself, he seems to feel that he is personally immune to those pesky little restrictions. He has announced the Department of InJustice will still pursue prosecution of those terrifying criminals who have a state-authorized toke, deeming that the state laws are trumped by federal ones. He is an adamant supporter of the Assault Weapons Ban, unless, of course, those assault weapons are supplied to Mexican drug cartels. While 14 lower-ranking officials were found guilty in the Fast and Furious scandal, slippery AG Holder remained relatively unscathed, even though he was held in contempt by the House of Representatives by refusing to cooperate in the investigation. If you are curious as to why the banksters seem to have blanket immunity for fraud and outright theft of funds, perhaps it has something to do with a glaring conflict of interest – Holder’s former law firm, Covington & Burling, represented MF Global, JPMorgan Chase, Wells Fargo, Citigroup, Bank of America, Morgan Stanley, Goldman Sachs and UBS.

Not so fondly known as Big Sis, Janet Napolitano is the nosy Secretary of Homeland Security. Encouraging an environment of ratting out your neighbor with her “See Something, Say Something” ads on screens in Walmart, Napolitano seems to have an extreme aversion to the right to privacy. She has generalized as potential terrorists so-called “Right Wing Extremists”, veterans, and a wide assortment of other guilty-until-maybe-proven-innocent groups. Under Napolitano’s reign the TSA has stepped out of the airport and into other public transit areas like train and bus stations, as well as large sporting events. She is also a proponent of surveillance drone use in American airspace for “public safety”.

The President of the United States,(despite his questionable eligibility) Obama has done more to demolish liberty during his first four years in office than all of his predecessors combined. Despite his deadly drone assassinations, his dedicated assault on the Constitution and his dubious personal background, Obama was re-elected for another 4 year term of Constitutional destruction. He has proven his willingness to circumvent the checks and balances of our system by sidestepping Congress with a dizzying, ever-increasing number of Executive Orders signed thus far in his presidency. He has even gone so far as to boast about his habit of going around Congress, memorably stating:  “we can’t wait for an increasingly dysfunctional Congress to do its job. Where they won’t act, I will. I’ve told my administration to keep looking every single day for actions we can take without Congress.”
‘

So, should these people be investigated for Treason against the United States? You be the judge. And feel free to share more nominations in the comments below.

Continue Reading
You may also like...
Related Topics:bankers, politicians, treason