The investment world has an embarrassingly short attention span. But frankly, it is a necessity. If daytraders, hedge funds and other horses in the carousel actually had to look beyond the next week of market activity or study back on market history in comparison to today, then they would not be able to retain their blind optimism, which is exactly what is necessary for them to continue functioning. If they were all to examine the global financial situation with any honesty, the entire facade would collapse tomorrow.

At bottom, it is not central bank stimulus and intervention alone that drives equities and bond markets; it is the naive faith and willful ignorance of average market participants. There is a problem with this kind of economic model, however. Reality is never kept in check indefinitely.  Fiscal truths will be exposed, one way or another.

How does one know when this full spectrum shift in awareness will occur? Well, there’s no science that can help us with that. While basic economics is subject to the forces of supply, demand and mathematical inevitability, it is also subject to human psychology, which is another matter entirely.

In the past I have made a point to outline similarities in responses to various economic crises.  For example, the media response and public perception at the onset of the Great Depression was a highly unfortunate exercise in false optimism. The response just before the credit crash of 2008 by the media and the masses was much the same. It is interesting to note in particular that the mainstream media tends to become more over-the-top in its certainty of economic stability the closer the system comes to collapse. That is to say, the nearer we edge towards financial calamity, the more violently the mainstream media attacks people who suggest that danger is on the horizon.

First, take a look at the following attempts by the media to embarrass or silence analysts like Peter Schiff just before the crash of 2007/2008:

Now, watch this attempt by CNBC to attack Bill Fleckenstein for having the audacity to question the validity of current stock values and pointing out that the Federal Reserve is destroying the economy rather than repairing it:

To be clear, while mainstream economists are almost always wrong, independent analysts are not prophets. We usually cannot provide the exact timing for the economic shifts we see coming. All we can do is provide a general window in which the events are likely to take place. Peter Schiff’s predictions on how the housing bubble and the credit crisis would play out were absolutely correct, even though he was about six months to eight months off his timing. Again, this is not an exact science, and human psychology has the ability to offset market fundamentals for months.

The supposed “catalyst” for the 2008 crash is primarily attributed to the fall of Lehman Brothers. I highly recommend any of the “bullish” economists out there arguing today that the central banks intend to prolong a stock rally indefinitely examine the statements made in the mainstream about Lehman and by Lehman leading up to their eventual death rattle. Then, absorb and really think on some of the recent statements and tactics used by Germany’s Deutsche Bank.

Specifically, note Lehman’s use of accounting and derivatives gimmicks and the cycling of funds through various accounts in order to make the company appear solvent. Then, take a look at revelations coming out of places like Italy that Deutsche Bank has been using the same model of false accounts and market manipulation, once again, with derivatives as a main tool for fraud.

Also notice the same outright dismissals of all pertinent evidence that Deutsche Bank might be suffering a capital shortfall, as Chief Executive John Cryan blames “speculators” for the companies losses. Lehman’s Dick Fuld and Bear Stearns’ Jimmy Cain both blamed “speculators” and “rumors and conspiracies” for the fall of their companies during the derivatives debacle eight years ago. It would seem that history doesn’t just rhyme, it sometimes repeats exactly.

Below is a rather revealing chart from the folks at Zero Hedge comparing the collapse of Lehman Brothers stock value to the steady decline of Deutsche Bank. Check it out: 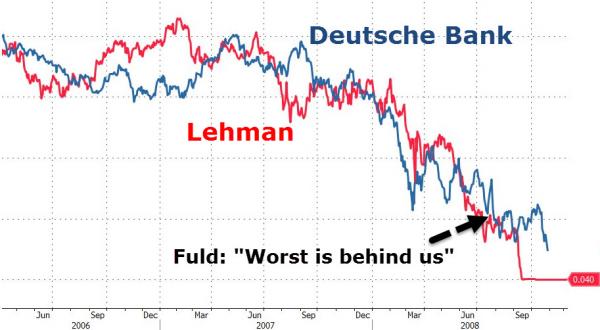 To be clear, Lehman was no catalyst. It was only a litmus test for a system completely devoid of tangible value and drowning in toxic debt. Lehman was a part of a much larger problem, it was not the cause of the problem. The same is true for Deutsche Bank.

The panic growing around Germany’s second largest financial institution, Commerzbank, as it moves to lay off nearly 10,000 employees and suspend its dividend is another crisis indicator separate from Deutsche Bank. The clear solvency issues in Italy’s major banks, including Monte dei Paschi, are yet another explosive element.

Keep in mind that when these edifices begin to crumble and Europe enters a state of financial emergency, the mainstream media and numerous governments will continue to blame speculators.  They will also claim that the entire disaster was set in motion through a “domino effect”; the first domino probably being Deutsche Bank. This will be a lie. There is no line of dominoes. One bank will not be bringing down the other banks — yes, there is terrible interdependency, but the real issue is that ALL of these banks are falling due to their own cancerous behaviors. The very system they are built around is a corrupt and unsustainable model, and I hold that this is by design.

International financiers do not want the general public to look at the validity of the system, they want the public to view collapse events as an oversimplified case of cause and effect.

If the public were to understand that the global banking model is a destructive one (for the public, not for the elites), then they might demand the erasure of the model and its institutions entirely.  The elites don’t want that. What they want is to be free to conjure crisis after crisis after crisis; to have the option to collapse the system only to replace it with something identical in nature but even more oppressive in its function. They want to create chaos today so that greater centralization can be purchased in the future through mass fear.

I continue to maintain as I always have that central banks around the world are shifting strategies and will do very little to intervene from this point on in the propping up of insolvent banking groups or equities markets. It is very unlikely that Germany or the European Central Bank, for example, will move to infuse Deutsch Bank with capital (at least, not until the damage has already been done). It is also unlikely that any central bank will move to openly stimulate markets until an equities crash has run its course. In fact, some central banks including the Federal Reserve may act to expedite a stock crash — watch for this to occur if Donald Trump attains the White House.

This has all happened before. It happened in 2008 when the Federal Reserve stepped back and allowed Lehman Brothers to go bankrupt. It will probably happen again when the German government and the ECB refuse to back Deutsche Bank. The noose is tightening on the global economy and, once again, the mainstream media is too biased or too dumb to see it. They’ll accuse the alternative media of crying “doom and gloom,” and perhaps our timing will be off. But exact timing will not really matter once the house of cards begins to topple. If we stick to our positions and refuse to be intimidated by rhetoric, the time will come when people will only remember that we were right for the most part and that the mainstream media was incompetent or dishonest.

In the meantime, we have a whole swarm of other trigger events before the end of the year.  I predicted in my article The World Is Turning Ugly As 2016 Winds Down that the Saudi 9/11 bill might be vetoed by Obama and that the veto would be overturned by the Senate. This has now taken place, which means increased Saudi tensions with the U.S. resulting in the eventual demise of the dollar’s petro-currency status. Watch the coming Italian constitutional referendum which could pave the way for conservative movements to initiate an Italian version of the Brexit. Also keep an eye on Syria yet again as diplomatic conflict flares between the U.S. and Russia (gee, who didn’t see that coming?). And, of course, the U.S. presidential election which appears to be culminating into the most divisive political event in America in decades.

Ignore the delusional positivism of the mainstream media and a large part of the equities trading community. Their fantasies only grow more elaborate the closer we get to a market heart attack.  And remember, economic collapse is a process, not an overnight affair. The progression of global decline should be apparent to anyone paying attention since 2008. The only question is, when will the average citizen become aware? My feeling according to current trends is, very soon.

Alt-Market is an organization designed to help you find like-minded activists and preppers in your local area so that you can network and construct communities for mutual aid and defense. Join Alt-Market.com today and learn what it means to step away from the system and build something better.

To contribute to the growth of the Safe Haven Project, and to help us help others in relocating, or to support the creation of barter networks across the country, visit our donate page.

You can contact Brandon Smith at: brandon@alt-market.com Alt-Market is an organization designed to help you find like-minded activists and preppers in your local area so that you can network and construct communities for mutual aid and defense. Join Alt-Market.com today and learn what it means to step away from the system and build something better. To contribute to the growth of the Safe Haven Project, and to help us help others in relocating, or to support the creation of barter networks across the country, visit our donate page.