How many babies have to die for Doctors to get it? Synergistic toxicity is a well-known phenomenon where the combination of toxic substances can be greater than the sum of its parts. Therefore, mixing two non-lethal levels of chemicals inside a vaccine can lead to an extremely toxic mixture. The medical community appears to gloss over this very pertinent fact that appears to be progressively killing more infants every year.

“Synergistic toxicity” refers to the effect that when exposed to two toxins, the toxicity level is far greater than the additive toxicity levels of the two toxins. A good example demonstrating ‘synergistic toxicity’ is a 1978 study on mice (Shubert et al. Combined Effects in Toxicology — A Rapid systematic Testing Procedure: Cadmium, Mercury & Lead. J. of Toxicology & Environmental Health 4:763, 1978). The study took the amount of mercury salt that kills 1 in 100 mice and 1/20th of the amount of lead salt that kills 1 in 100 mice. When these amounts of mercury salt and lead salt were administered, the synergistic toxicity of these two toxins killed 100 in 100 mice. 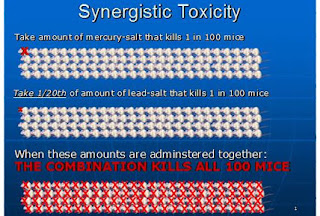 It is important to understand the concept of ‘synergistic toxicity’, as research is increasingly showing that different toxins are typically synergistic rather than additive in the human body. However when testing is performed on a toxicity of a substance, the ‘level of harm’ is set based on an assumption that the substance is the only toxin to which he body is being exposed.

A study published in the Human and Experimental Toxicology journal has found a direct statistical correlation between higher vaccine doses and infant mortality rates. It is a confirmation that many anti-vaccine advocates have long awaited and further establishes and adds to preliminary evidence that vaccinations are toxic poisons having no place in the human body. The study, Infant mortality rates regressed against number of vaccine doses routinely given: Is there a biochemical or synergistic toxicity?, was conducted by Gary S. Goldman and Neil Z. Miller who has been studying the dangers of vaccines for 25 years.

The infant mortality rate (IMR) is one of the most important indicators of the socio-economic well-being and public health conditions of a country. The US childhood immunization schedule specifies 26 vaccine doses for infants aged less than 1 year–the most in the world–yet 33 nations have lower IMRs. Australia and Canada are a close 2nd and 3rd respectively with 24 vaccine doses.

Some countries have IMRs that are less than half the US rate: Singapore, Sweden, and Japan are examples. According to the Centers for Disease Control and Prevention (CDC), “The relative position of the United States in comparison to countries with the lowest infant mortality rates appears to be worsening. ”

Many nations adhere to an agreed upon International Classification of Diseases (ICD) for grouping infant deaths into 130 categories. Among the 34 nations analyzed, those that require the most vaccines tend to have the worst IMRs. Thus, we must ask important questions: is it possible that some nations are requiring too many vaccines for their infants and the additional vaccines are a toxic burden on their health? Are some deaths that are listed within the 130 infant mortality death categories really deaths that are associated with over-vaccination? Are some vaccine-related deaths hidden within the death tables?

“A single vaccine given to a six-pound newborn is the equivalent of giving a 180-pound adult 30 vaccinations on the same day. Include in this the toxic effects of high levels of aluminum and formaldehyde contained in some vaccines, and the synergist toxicity could be increased to unknown levels. Further, it is very well known that infants do not produce significant levels of bile or have adult renal capacity for several months after birth. Bilary transport is the major biochemical route by which mercury is removed from the body, and infants cannot do this very well. They also do not possess the renal (kidney) capacity to remove aluminum. Additionally, mercury is a well-known inhibitor of kidney function. “–Boyd Haley Ph.D.

How Many Deaths Are Necessary?

The end of 2011 was masked with sadness for Belgium parents Raphael Sirjacobs & Beatrice Dupont, as their nine week old daughter Stacy Sirjacobs lost her fight for life. Stacy died just one week after her first vaccinations and left her twin sister Lesly behind. The twins received Prevenar, a vaccine against meningitis and pneumonia, Infanrix Hexa, a six in one vaccination for diphtheria, tetanus, polio, pertussis, hepatitis B and Haemophilus type B, and finally the Rotarix, a preventive vaccine for gastroenteritis. This means that these tiny vulnerable babies received a staggering nine vaccines in one day, vaccines that may have caused one of them to die.

A government inquiry was launched in 2011 has found that polio vaccines for infants funded by the Global Alliance for Vaccination and Immunisation are causing deaths and disabilities in regional countries including Pakistan. The report on The Express Tribune also suggested suspending the mass polio campaign, including the administration of pentavalent vaccines — a mixture of five vaccines until an inquiry finds these vaccines safe for children. There is now evidence that polio paralysis has also been a very common yet discreetly hidden side effect associated with polio vaccines.

When the first, injectable, polio vaccine was tested on 1.8 million American children, within a few days they had a huge epidemic of paralytic polio: in the vaccinated, their parents and other contacts.

On February 21, 2013, a one month-old baby girl died after receiving 5 vaccinations. Baby Ayushi Gupta died at the Maltibai Hospital, Thane, West Mumbai in India just hours after receiving her vaccinations for Hepatitis B, DPT (diptheria, pertussis and tetanus) and oral pulse polio drops.

Using linear regression, the immunization schedules of these 34 nations were examined and a correlation coefficient of 0.70 was found between IMRs and the number of vaccine doses routinely given to infants. When nations were grouped into five different vaccine dose ranges, 98.3% of the total variance in IMR was explained by the unweighted linear regression model. These findings demonstrate a counter-intuitive relationship: nations that require more vaccine doses tend to have higher infant mortality rate.

Mercury Still In 50 Percent of All Flu Vaccines

If you have any doubts on the neurotoxic potential of thimerosal, please review the following scientific publications which document the adverse effects of mercury, merthiolate and ethyl mercury.

“One publication showed that combining mercury and lead both at LD1 levels caused the killing rate to go to 100% or to an LD100 level (12). An LD1 level is where, due to the low concentrations, the mercury or the lead alone was not very toxic alone (i.e. , killed less than 1% of rats exposed when metal were used alone). The 100% killing, when addition of 1% plus 1% we would expect 2%, represents synergistic toxicity. Therefore, mixing to non-lethal levels of mercury plus lead gave an extremely toxic mixture! What this proves is that one cannot define a “safe level of mercury” unless you absolutely know what others toxicants the individual is being exposed to. The combined toxicity of various materials, such as mercury, Thimerosal, lead, aluminum, formaldehyde, etc. , is unknown. The effects various combinations of these toxicants would have is also not defined except that we know they would be much worse than any one of the toxicants alone. So how could the ADA take any exception, based on intellectual considerations, to my contention that combinations of Thimerosal and mercury could exacerbate the neurological conditions identified with autism and AD? Autism and AD have clinical and biological markers that correspond to those observed in patients with toxic mercury exposure.

Why would the ADA take this position? I personally feel like I have been in a ten-year argument with the town drunk on this issue. Facts don’t count and data is only valid if it meets the pro-amalgam agenda. The synergistic effects of mercury with many of the toxicants commonly found in our environment make the danger unpredictable and possibly quite severe, especially any mixture containing elemental mercury, organic mercury and other heavy metal toxicants such as aluminum. ” ~ Boyd Haley

Dave Mihalovic is a Naturopathic Doctor who specializes in vaccine research, cancer prevention and a natural approach to treatment.

Contributed by Natural Blaze of NaturalBlaze.com.