The Left is morally and fiscally bankrupt, devoid of coherent solutions, and corrupted by its embrace of the Corporatocracy.

History often surprises us with unexpected ironies. For the past century, the slide to fascism could be found on the Right (conservative, populist, nationalist political parties).

But now it’s the Left that’s descending into fascism, and few seem to even notice this remarkable development. By Left I mean socialist-leaning, progressive, internationalist/globalist political parties.

What is fascism? There is no one tidy definition, but it has three essential elements:

1) State and corporate elites govern society and the economy as one unified class.

2) This status quo (i.e. The Establishment) seeks to impose a conformity of values and opinion that support the dominant narratives of the status quo via the mass (corporate) media and the state-controlled educational system.

3) Dissent from any quarter is suppressed via mass-media ridicule, the judicial crushing and silencing of whistleblowers, and all the other powers of the central state: rendition, extra-legal imprisonment, political gulags (in our era, disguised as drug-war gulags), character assassination, murder by drone, impoverishing dissenters via firings and blacklists, and on and on.

The Left is now the political wing of the corporatocracy. As Phillipe Poutou, a Ford factory mechanic from Bordeaux who is the sole working-class candidate in France’s presidential election, so deliciously pointed out, the Left and Right status quo candidates are indistinguishable in terms of their self-serving corruption and elitism:Mechanic-Candidate Bursts French Political Elite’s Bubble (NY Times)

Here in the U.S., the self-serving Democratic Party elites operate within the Corporatocracy structure, in which the state protects and funds private-sector cartels; the two intertwined and self-reinforcing elites manifest and enforce state policies.

This state-corporate elite domination is fascism. Some may claim the Left was co-opted by the Corporatocracy structure, others will blame capitalism (never mind the dominant form of capitalism is state-cartel, and it cannot exist without the central state enforcing the privileges of monopoly).

But these are simply excuses for the abject surrender of the Left to self-enrichment and power. Since the Left has always claimed the high moral ground–and continues to do so–see my essay Virtue-Signaling the Decline of the Empire(February 28, 2017)– the Left must mask its own corruption and role in the Corporatocracy structure.

The Left accomplishes this by imposing a virtue-signaling conformity on corporate media, social media, and the state institutions under its control— higher education, government agencies, etc.

Dissent is by definition fake news or hate speech–Orwell would be so proud of the Left’s deft doublespeak.

The suppression of skeptical inquiry and alternative narratives is fascism. There is no way to sugar-coat this, so let’s not even try, shall we?

The principle of substitution reveals the underlying truth. If a Rightist state imposed a virtue-signaling conformity on corporate media, social media, and the state institutions under its control, the Left would be very quick indeed to identify this as fascist.

It’s still fascist if the Left does the same thing.

While the Left attempts to deflect a wider understanding of its descent into fascism with obsessive accusations of fake news and incessant demands for virtue-signaling conformity, the developed-world economies are circling the drain. The Left’s obsession with meaningless speech acts is a direct result of its lack of will and intellectual firepower to tackle the erosion of working-class/middle-class income, wealth and political power.

This is the harsh reality: wages are no longer an adequate means of distributing the dwindling surpluses of advanced economies: 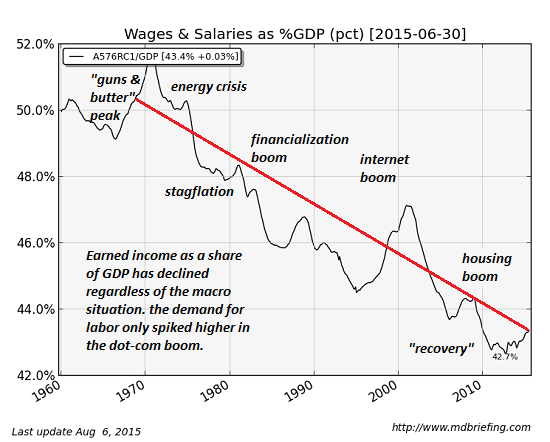 The Left’s single “solution” to this profound structural trend is for central states to “fight austerity” by borrowing and blowing trillions of dollars, yen, yuan, euros, etc.–with no end in sight. But as even the most economic illiterate Leftist understands somewhere in their muddled soul, borrowing trillions from future generations is morally and fiscally bankrupt, and the very opposite of a “progressive” policy.

Here’s the U.S. central state debt: if the Left claims this trajectory is sustainable, what is this claim based on? It’s based on magical thinking.

The magical thinking of the Left is that decades of slowing growth will be reversed and the clock of history magically reset to 1946 if the central state borrows even more trillions from future generations. But there is abundant evidence (see the wages chart above) that borrowing and squandering immense sums has not boosted growth rates in a sustainable fashion–rather, the staggering debt loads are squeezing current spending and shackling future policy-makers with an ever-grimmer slate of self-reinforcing bad choices.

The Left is morally and fiscally bankrupt, devoid of coherent solutions, and corrupted by its embrace of the Corporatocracy. Its descent to fascism has too much momentum to be stopped. Isn’t it obvious that the only way forward is to jettison both the Left and Right flavors of state-cartel Corporatocracy and pave a third way?