Who would have thought that it ever would have happened? Someone in mainstream medicine and peer reviewed literature and journals would publish the ‘unthinkable’: fluoride, the stuff they put into municipal water supplies supposedly to ‘protect’ teeth from cavities, is a neurotoxin. Wow! And congratulations to doctors Philippe Grandjean, MD, and Philip J Landrigan, MD, two researchers who published their findings in The Lancet Neurology, Volume 13, Issue 3, Pages 330 to 338, March 2014. [1]

In the Summary published for their article, it states that

Neurodevelopmental disabilities, including autism, attention-deficit hyperactivity disorder, dyslexia, and other cognitive impairments, affect millions of children worldwide, and some diagnoses seem to be increasing in frequency. [CJF emphasis added]

Probably nothing more can confirm that as scientific, demographic, and the horrible truth! And, everyone—not just children—are paying the consequences for all chemical exposures. Now let’s see if Drs. Granjean and Landrigan will have the scientific integrity to expose neurotoxins in vaccines for what they truly are. I’d like to give them a reference where to start looking for ideas: My 2013 book Vaccination Voodoo, What YOU Don’t Know About Vaccines, available on Amazon.com.

In that book I also mention fluoride. Why? Because what is not documented by peer reviewed ‘science’ journals is the chemical interaction(s) between fluoride and vaccine neurotoxins and other vaccine chemicals. Add to that list, the chemicals we are forced to eat in our food, especially glyphosate from inordinate spraying of genetically modified crops such as corn, sugar beets, soy, canola, alfalfa animal feed, and possibly squash and potatoes.

Add to that all the herbicides, fungicides, pesticides, etc. that are sprayed on fruits, vegetables, and animal feeds that get into the food chain BIG time. For more information about those “…cides,” which are intended to kill life forms, readers and both doctors may want to read my 2010 book Our Chemical Lives And The Hijacking Of Our DNA, A Probe Into What’s Probably Making Us Sick, also available on Amazon.com.

Any chemical whose purpose is to kill a life form must be considered as a neurotoxin, endocrine disruptor, or carcinogen – at a minimum – in my opinion as a consumer health researcher for almost 37 years.

Not to digress from the importance of this article about fluoride, but the USA can put a nation back to work by cleaning up the environment from toxicity once the chemical and pharmaceutical industries are exposed for what they truly are: Biohazards!

Here’s a short YouTube regarding fluoridation of water in other countries.

According to the British Fluoridation Society as of November 2012 [2], the following countries fluoridate portions of their population: 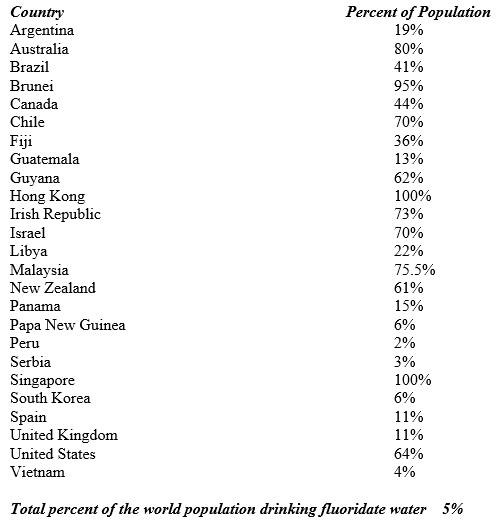 So, what has the addition of fluoride to municipal water supplies done for human health? Not very much, except cause health problems [3], including:

One would think with the publication in 2010 that kid’s IQs are adversely and negatively impacted, federal, state and city governments would have stopped municipal water fluoridation immediately. No! they have not, and it’s now 2014. Does that mean that water fluoridation has a purpose which is not being acknowledged? Could it be the deliberate dumbing-down of the U.S. population? Or, could it be to make more business for dentists, doctors, and the pharmaceutical industry? What do you think?

Catherine J Frompovich (website) is a retired natural nutritionist who earned advanced degrees in Nutrition and Holistic Health Sciences, Certification in Orthomolecular Theory and Practice plus Paralegal Studies. Her work has been published in national and airline magazines since the early 1980s. Catherine authored numerous books on health issues along with co-authoring papers and monographs with physicians, nurses, and holistic healthcare professionals. She has been a consumer healthcare researcher 35 years and counting.