Many are comparing the extreme weather being experienced by much of the US to the drought that caused the Dust Bowl in the 1930’s. The torrential heat has withered crops in the fields and caused livestock to suffer from lack of water.

The Dust Bowl, or the Dirty Thirties, was a period of severe dust storms causing major ecological and agricultural damage to American and Canadian prairie lands. The phenomenon was caused by severe drought coupled with decades of extensive farming without crop rotation, fallow fields, cover crops or other techniques to prevent wind erosion

During the drought of the 1930s, without natural anchors to keep the soil in place, it dried, turned to dust, and blew away eastward and southward in large dark clouds… The Dust Bowl affected 100,000,000 acres (400,000 km2), centered on the panhandles of Texas and Oklahoma, and adjacent parts of New Mexico, Colorado, and Kansas.

Millions of acres of farmland were damaged, and hundreds of thousands of people were forced to leave their homes… Owning no land, many became migrant workers who traveled from farm to farm to pick fruit and other crops at starvation wages.

While our current situation has not reached the natural disaster status that was the Dust Bowl, food prices will be seriously affected.  The drought that has stricken us is actually worldwide in nature.

Data updated on the 16th of each month 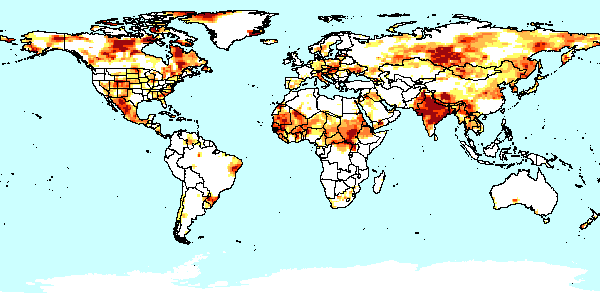 The limited harvests will cause food prices to skyrocket in the months ahead, by up to 3.5%, according to USDA predictions.  This means higher prices for less food at the supermarket checkout during the year to come.

It puts us one step ahead that we realize it is coming.  You won’t see the increase in packaged foods just yet – expect those prices to rise in the early fall.  The cost of produce will be noticeably higher during harvest seasons, the time that it is usually at its yearly low point.

The biggest problem is: this isn’t a one-time event.  Last year we suffered from a severe drought as well.  This leads to a more difficult situation.  Consider the following components:

This is a cautionary tale.  The price increases will be dramatic.  Expect to see fewer sales, especially those great “loss leaders” we all love to take advantage of.

Prepare for this by stocking up NOW before the major price increases hit. For instance, purchasing bulk dried corn, corn meal, and a diverse supply of bulk meats before the prices raise. Pamper your garden and get every single ounce of produce you can squeeze out of it.  Buy in bulk to take advantage of lower prices and preserve the food for use this winter.

Make adjustments in your shopping and eating habits now to weather the upcoming food crisis.

What can we do to prepare our homes and property for drought-like conditions?

There is little question that the U.S. is undergoing a drought of historic proportions.  Fortunately for most of us, the taps are still running with city water, the stores are still loaded with bottled water and the wells have not run dry.

One of the most important factors in choosing your bug out location is to select one with an ample water supply.  However, even the most abundant source can dry to a trickle during long-term arid weather.

The American Red Cross has some great suggestions to make a limited water supply go further.

Other ways to conserve water during a drought is to plant your vegetable garden with drought-tolerant crops.  Plants that are common to southern climates tend to do better in hot, dry conditions than “spring” plants like peas and lettuces.  Drought tolerant doesn’t mean that these plants don’t require water – they do – just not as much as some of the other vegetables require.

These varieties use somewhat less water than the average veggie patch resident:

Use compost and mulch to keep as much moisture as possible in your soil.  Collect “gray water” from your house to use for watering your vegetables.  If water usage is limited, focus on the plants that will feed you, not the ones that look pretty.

If you get some rainfall, be sure to make the most of it by harvesting it in rain barrels and other containers – in a drought, every single drop helps!  If your harvested water is going to be used for human consumption, be prepared with supplies and information on proper filtration practices.

The bottom line is these extreme drought-like conditions will effect our lives and our pocket books; and we need to prepare for this now. Those of you who live or are working at living self-reliant lifestyles take heed and prepare for the effects of the drought now with the tips provided. As always, we will weather this together and hopefully come out relatively unscathed.