I have often identified Keynesian economists and the Federal Reserve as cargo cults. After the U.S. won World War II in the Pacific Theater, its forces left huge stockpiles of goods behind on remote South Pacific islands because it wasn’t worth taking it all back to America. After the Americans left, some islanders, nostalgic for the seemingly endless fleet of ships loaded with technological goodies, started Cargo Cults that believed magical rituals and incantations would bring the ships of “free” wealth back. Some mimicked technology by painting radio dials on rocks and using the phantom radio to “call back” the “free wealth” ships.

The Keynesians are like deluded members of a Cargo Cult. They ignore the reality of debt, rising interest payments and the resulting debt-serfdom in their belief that money spent indiscriminately on friction, fraud, speculation and malinvestment will magically call back the fleet of rapid growth.

To the Keynesian, a Bridge to Nowhere is equally worthy of borrowed money as a high-tech factory. They are unable to distinguish between sterile sand and fertilizer, and unable to grasp the fact that ever-rising debt leaves America a nation of wealthy banks and increasingly impoverished debt-serfs.

The Keynsian Cargo Cult relies on an essentially magical belief that government give-aways will raise “aggregate demand,” the “animal spirits” demand for more of everything, which will magically increase productivity, wealth, etc.

The Cargo Cult faithful do not understand diminishing returns: at some point, the interest on skyrocketing debt drains income and capital from potentially productive investments to pay for previous unproductive spending on fraud, friction and malinvestments. “Free money” creates moral hazard, which means that those who can borrow money for almost nothing and never have to pay it back act entirely differently from those paying market rates for money and backing their loan with real collateral that is at risk.

The Fed’s plan to boost more consumer borrowing/spending via the “wealth effect” by elevating the stock market has failed. The “wealth effect” is classic Cargo Cult magic: if you make people feel richer by managing their perceptions, they will start acting richer, i.e. borrowing and spending more based on phantom assets.

Why is this perception-management a form of magic? Household incomes have declined. How can a debtor borrow and spend more if his income has declined? The “magic” only works if he can borrow money based on phantom collateral, and the rate of interest is so low that his impaired income enables him to leverage more debt–though any prudent banker would reject the debtor as a bad risk.

Borrowing money at near-zero rates with no collateral creates massive moral hazard. No skin in the game? Default is not just easy, it’s rational: All praise to the new subprime – 1 out of 6 FHA insured loans is now delinquent (Dr. Housing Bubble).

The Fed has gone to considerable trouble and expense to goose the stock market to multi-year highs. Yet the economy is still stagnant. If you have any doubts about this, please study this article and these charts: The Lost Decade of the Middle Class (Pew Trust)

Real household income by age bracket: only the 65+ group’s income has increased.

Labor’s share of the non-farm private-sector economy has fallen off a cliff: 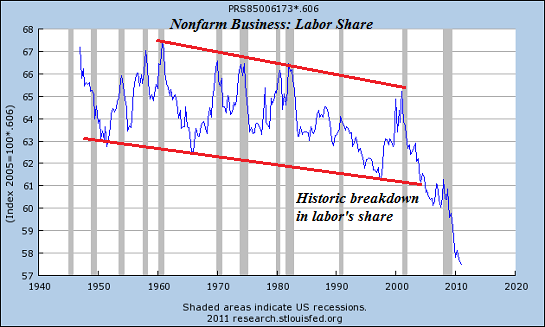 Household debt has far outpaced wages: households are over-indebted and over-leveraged. Only the top 5% have reduced leverage. Remove their income and debt from the calculation and the “households are deleveraging” argument collapses. 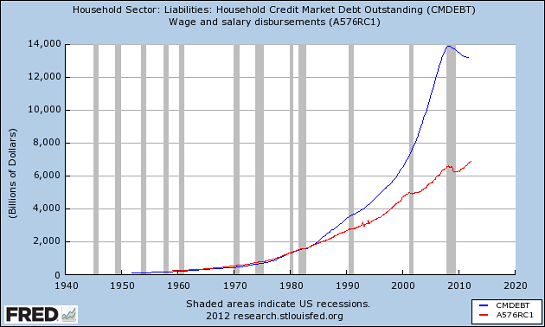 The economy is 14 million jobs short of what’s needed to support housing and spending: 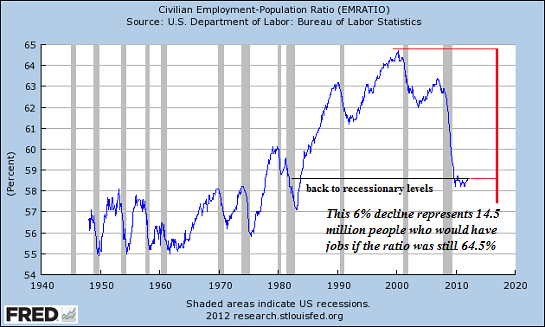 The Fed’s monetary policies of saving the “too big to fail banks” and stealing from savers to subsidize cheap mortgages and other debt has failed on multiple levels:The “wealth effect” it sought to create by manipulating the stock market ever higher has been limited to the top 5%, an easily predictable result (all you have to do is look at who owns most the nation’s stocks and bonds–surprise, it’s the top 5%).

The Fed’s Cargo Cult faith held that this largesse to the banks and the wealthy would magically trickle down to the bottom 95%. It didn’t, as anyone who actually lives in the real world could have predicted.

My neighbor buying a Porsche and a bunch of stuff made in China does not generate income for me unless I assemble Porsches or stuff in China or I own shares in Porsche and WalMart. Since Americans don’t assemble things in Germany and China, and 95% don’t own enough shares in any company to generate meaningful income, the Fed’s policies failed miserably. The Fed’s Cargo Cult “trickle down” magic was the equivalent of waving dead chickens and dancing the humba-humba around the campfire at midnight.

Having failed to create a useful “wealth effect” by goosing stocks, the Fed is trying once again to goose housing. Hey, it worked from 2002 to 2007: make money cheap and easy to borrow, accept phantom assets as collateral, lower down payments to near-zero, and housing prices soar, creating a bubblicious amount of equity that can be borrowed and blown.

In other words, the only mechanism the Fed has to spark a widespread “wealth effect” is to re-inflate housing. It has been trying to do so mightily for years, by stealing hundreds of billions from savers to subsidize low-interest mortgages and by buying $1 trillion of impaired mortgages off the banks, clearing their balance sheets and theoretically enabling them to originate more mortgages.

Lower rates were supposed to spark a re-financing boom that would free up billions of dollars as monthly mortgage payments dropped, but oops, very few homeowners are creditworthy now that having a pulse and the ability to lie are no longer sufficient to get a mortgage.

The Fed can funnel trillions to banks, but it can’t force them to lend money to uncreditworthy borrowers putting up phantom collateral.

So the Fed is back to the game of goosing phantom assets higher with perception management. The Fed is hoping to generate a “virtuous cycle” in which higher home prices lead to millions of homeowners rising above water and having equity, which will make them feel wealthier (the wealth effect) and more energized (“animal spirits”) to borrow and spend.

In a centrally managed economy and market, housing prices are manipulated higher by lowering rates, lowering credit standards, guaranteeing marginal borrowers can buy homes with 3% down payments and so on. The Federal government basically took over the mortgage market in 2009, and government-backed mortgages still account for over 95% of all mortgages. The mortgage market has been completely socialized as a means of subsidizing housing.

Note the Cargo Cult magic of the “wealth effect” has it backwards: income doesn’t rise as a result of productive investments and higher productivity that’s passed on to workers, it rises because phantom assets are inflated to justify workers taking on more debt to boost their spending.

How has the Fed’s Master Plan been working so far? Hmm, not much bang for all those bucks. 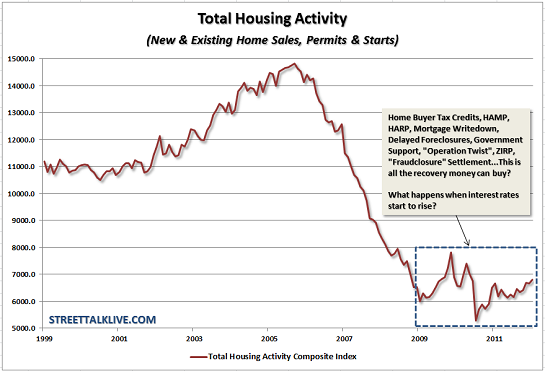 The Fed Cargo Cult wants to paint dials on rocks and re-set the S-curve that guides all speculative bubbles and busts. This time we’ll force people to buy houses for inflated prices and force lenders to make risky loans to credit-impaired buyers with our magic mind control! 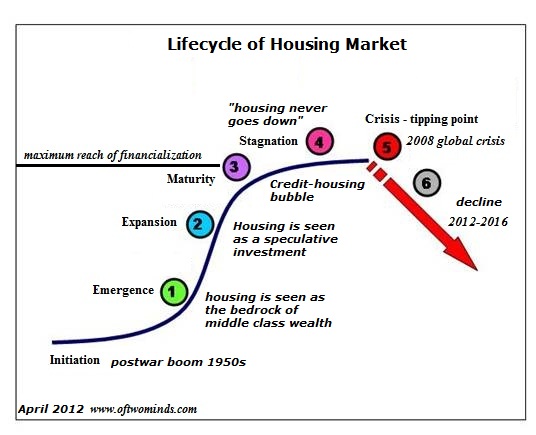 The housing industry and its Fed backers were ecstatic with recent increases in the Case-Shiller index of housing prices. I’ve marked up the chart to reveal the underlying dynamics of this underwhelming reflation. 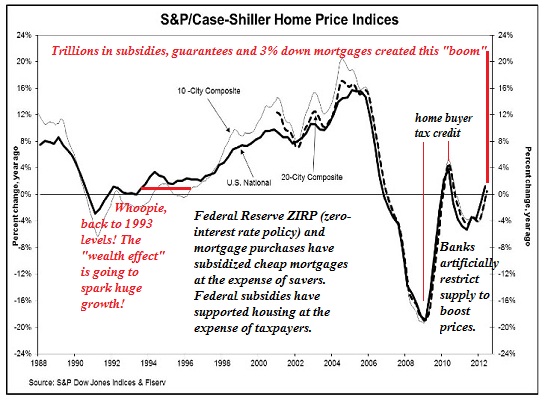 1. Boosting expectations of inflation so people will be encouraged to spend what money they have now.

2. Creating the perception that housing is recovering, as opposed to the truth that housing is only rising due to stupendous incentives created by subsidies paid by others and the banks’ stealth campaign to lower supply by holding millions of defaulted homes off the market.

3. By stimulating demand and artifically reducing supply, the Fed and the banks hope to create phantom collateral (home equity) that can support another enormous wave of new borrowing and spending.

What nobody dares mention is the Cargo Cult is funneling trillions of dollars into unproductive malinvestments. Housing is a form of consumption; it is not a productive investment. It is subject to diminishing returns: all the trillions dumped into subsidizing housing have yielded a pathetically meager increase in phantom assets.

The Cargo Cult of the Federal Reserve has failed, and it should be abolished as the ultimate destroyer of wealth via its policies of manipulation, malinvestment and moral hazard.