Whether we care to admit it or not, the globalists have brought the people of this country to the battlefield.

There is a lot to be learned from the events in Ferguson, MO.  Most notably, as we progress through the three stages of revolution, it is important to note that the fight between self-determination and self-rule vs. the autocratic aims of the globalists is about to turn deadly.

Stage One of the Revolution

The first stage of a revolution, is a war of ideas and a campaign for the truth. This is what we in the alternative media are trying to accomplish with our talk shows and websites.  We are locked into a war of words and if we fail to use our words to awaken all of humanity, many of us realize that we are hopelessly lost and the globalists will carve us up for dinner. The globalist forces used to dominate the message. Despite the fact that  98% of the media is controlled by globalist controlled business interests consisting of five mega corporations, who in turn are controlled one way or another, by the members of the Federal Reserve, the globalists no longer own the message of the airwaves.

The Leichtman Research Group reports that there are presently 49,915,000 broadband subscribers versus 49,910,000 cable subscribers. These figures may suggest the inevitable transition to an Internet-dominated future for television.

As you just heard in this video, only 20% of the population trusts the media. The game is up, the mainstream media is officially becoming the dinosaur media.
When Coast to Coast left the alternative media and became part of the censored mainstream media, that put the show on the road to life support.

Art Bell used to be the king of night time radio. His show was creative and captured much of America’s listening audience’s imagination.  However, when Art sold control of his show to Premiere Networks and ultimately to Clear Channel Communications, Art lost a good portion of his editorial control and Coast to Coast was never the same. Eventually, Art left Coast and it  has been nothing but a ratings slide ever since, except for the brief breath of fresh air provided by John B. Wells.

After a period of prolonged instability following the departure of Art Bell as the primary host of Coast to Coast, George Noory entered the scene in 2003 where he has since remained. However, Noory’s listening numbers are nothing to write home about. Once upon a time, some estimated that Art Bell had somewhere around 6-12 million listeners on any given night. In contrast, Noory’s numbers are a much smaller 275,000 to 300,000 listeners per night. Interestingly, the Hagmann and Hagmann report boasts very similar numbers on a good night. Further, Alex Jones averages two million listeners per week, which averages about 400,000 per day which is leaving Coast to Coast in the rear view mirror. If Coast to Coast is to remain a viable entity, they will have to begin to embrace the pioneer spirit of Art Bell and John B. Wells.

When John B. Wells joined coast, his numbers were anywhere between 750,000 to 1.2 million listeners for any given Saturday night. This ratings disparity could not have resonated well with George Noory.

There were some who were in favor of making Wells the permanent host of the show during the week. This idea was met with draconian repression in an effort to preserve the status quo. George Noory has proven to be a good corporate employee and a great protector of the corporate interest and that is first and foremost in importance to management at Clear Channel. This speaks to the clear message of what Coast to Coast has become.

One has to go no further than Steve Quayle’s website to understand the seismic shift in who the public is following with regard to getting their news. Steve has one of the largest websites in the world. In the alternative media, he is in the top three. He has 1,533 websites that follow his work and publications on  a daily basis. This exponentially increases his reach in a way that would have not been possible before the introduction of the Internet.

The numbers are in, and as you can see below, people would rather go to sites like Steve Quayle, or listen to Doug and Joe Hagmann, rather than get their news from CNN, Fox, HLN or MSNBC.

Sometime back, Brzezinski lamented the fact that the globalists were losing control and the people were waking up. Brzezinski was correct and the globalists are beginning to lose the battle on which side is going to control the dialogue.

The message is clear, if the globalists cannot control the dialogue and continue to obfuscate the truth, they will turn violent in an effort to control the people. I submit that is exactly what is happening. Ernie Hancock, the publisher of Freedoms Phoenix told me that 60% of younger adults are getting their news from digital sources and that number is sure to grow exponentially. Conversely, globalist insider, Zbigniew Brzezinski, says that the much feared “global political awakening” is in full swing and it constitutes the biggest threat to the globalist domination of the planet. However, Brzezinski also stated, in a very prophetic manner, it is easier “to kill one million people than it is to control one million people”.

The stage one battle for control of the message is slowly being won by the alternative media.

Stage Two of the Revolution

Stage two of a revolution consists of civil disobedience or nonviolent resistance. In Ferguson, we see a local police force that is armed like an occupation force in Afghanistan.They have physically abused members of the media for simply doing their job. 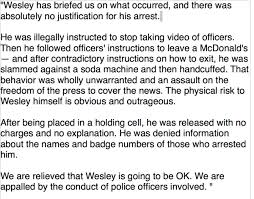 Both the local citizens of Ferguson and the DHS controlled police force are showing absolute contempt for each other. 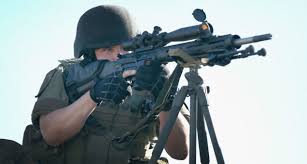 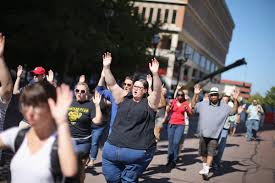 In the last decade, the number of  people murdered by police has reached 5,000. The number of soldiers killed since the inception of the Iraq war number 4489.  Over 40,000 military style “knock and announce” police raids a year. Do you know the most recent numbers of non-military US citizens killed by terrorism worldwide? That number is 17. You have a better chance of being killed by a bee sting than you do a terrorist. 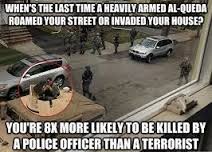 The Globalists have declared war on American civil disobedience and the manifestation of this declaration is the heavily militarized police forces across America and the new East German Stasi mentality. 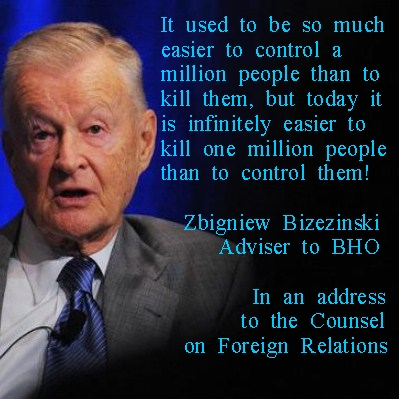 Brzezinski “Easier to kill a million …” He has the President’s ear and it is hard not to take this threat seriously.

Stage Three: All Out War

Most of the nation stands with the people in Ferguson in opposition to the occupation forces who illegally seized control of the city. American citizens have accomplished two things: (1) They are winning the propaganda battle for the hearts and minds of their fellow countrymen; and, (2) Americans are increasingly engaging in civil disobedience against the illegitimate use of police state tactics against the people of this country.

Stage three is normally characterized by  a direct physical confrontation with the powers that be which involves a large number of citizens. We have certainly seen this in Ferguson. However, we are also seeing the government employ asymmetrical warfare tactics against the American people as exemplified by the massive illegal immigration into this country which began late last spring.  We are also witnessing the Ebola threat in which our government is doing nothing in terms of containment as they continue with the policy of not health screening illegal immigrants. In the context of current events, it is hard to believe that Ebola will not be used as a weapon against legitimate self-expression by American citizens.

A successful revolution cannot simply jump to stage three without having progressed through the first two stages. The first two stages are the necessary prerequisites that the globalists require to build the cohesiveness that they will need to begin the roundups, the murder, the mayhem and the total subjugation. False flag attacks are a prominent part of the transition between stage two and stage three rebellion. False flag attacks also provide the justification and also galvanizes the pro-governmental forces to a point in which they begin to enslave the people. Why do you think the NDAA and the John Warner Defense Act were passed?

I am not an advocate for revolution because it will potentially give the globalists what they desire, total control. At the end of the day, the people will not decide the battlefield for revolution if it is to occur. The globalists have already made that determination. I am afraid that there is no turning back. The events in Ferguson may be looked upon by historians as a trigger event for what is to come.