In early May, I had previously published an article in which some of the Jade Helm leadership were expressing concerns that the mission was so compartmentalized that it left many questioning the operation. I am told that some details about the nature of the martial law principles that Jade Helm is practicing is beginning to leak out. This document reflects these martial law principles which appear to be a staple for Jade Helm martial law enforcement.

On May 3, 2015, I published the following 17 characteristics of martial law. The two lists are remarkably similar. However, there are some fundamental differences.

4. The seizing of personal assets such as food and water

5. Control over all food and water.

6. The prohibition of weapons of any kind including guns, knives or chemicals which can be turned into explosives.

7. The confiscation of property, homes and businesses.

8. Arrests without due process.

10. Forced relocation and the introduction of slave labor.

11. Forced conscription into various labor camps and even into the military

13. The installation of massive surveillance programs and the establishment of snitch programs.

14. The total control or elimination of religion.

16. Executions without due process of law.

17. Total suspension of the Constitution.

From what I was allowed to read, which totaled 16 pages, I have summarized the provisions for martial law under Jade Helm in the following points:

1. Control of all travel. The use of checkpoints to control exit and entry from neighborhoods and cities will be employed. LEO will enforce neighborhood quarantines with the assistance of loaned military vehicles. Military and National Guard will maintain checkpoints leading in and out of cities. This is why we saw the Idaho/Washington military checkpoint checking for ID’s two weeks ago.

2. The command and control of all martial law activities will fall under the Department of Homeland Security. The President retains all executive control.

3. Refugee and civilian support centers will be established for the purposes of offering protection from anticipated widespread violence, looting and food/water shortages. The “guests” will be screened for the suitability to remain in the center. Those deemed to be a danger or in some way unsuitable, will be transported to more secure facilities.  Each guest will be screened for health conditions and essential job skills which would be necessary to maintain the area. Based on the judgment of the Area Director, more vulnerable people (elderly, chronically ill, women and children) may be moved to move secure facilities for their protection.

5. Air travel of any type will be suspended pending approval of the designated authority in both the area of departure and the area of arrival.

6. In volatile areas, dusk to dawn curfews will be established.In home curfews could be imposed until the crisis subsides. Violators will be arrested and taken to a secure facility. Lethal force can be used against anyone caught looting.

7. All business entities are subject to search and confiscation of supplies deemed vital to the survival of citizens in the present crisis. Every effort will be made to utilize private resources in an equitable manner.

8. Anyone engaging in behavior which is deemed detrimental to safety and welfare of any community will be arrested. (Note: This is the end of free speech).

9. Public or private possession of any weapon is expressly forbidden. The document spoke of voluntary gun confiscation where people come and turn in their guns. Compensation for the guns will be offered. The type of confiscation was not mentioned, but I would suspect food and water.

10. In volatile areas, the Area Commander can order door-to-door welfare checks. Further, if field officer feels that any weapon is a threat to the safety and security of a community, that weapon shall be confiscated and destroyed.

11. Food and water storage by individual citizens is encouraged. However, if shortages within a designated area occur, confiscation of these resources may occur. No citizen shall experience food and water confiscation that leaves them with less than three days of supplies per person living in any given residence.

12. There is no doubt that massive civil unrest will occur and in these instances, travel outside a designated distance from one’s home can be limited. Proper paperwork can be required based upon the judgment of the Area Commander.

13. Area Commanders will employ trusted members of the clergy to assist in restoring order.

14. Regional authorities will control the release of information under the guise of preventing panic. All elections will be suspended. Therefore, the belief that Obama will not leave office at the end of his term is correct if the martial law predates his last day in office.

15. Numerous references were made to Army Field Document FM 3-39.4 which is the means in which “detainees” will be utilized.

16. Unsanctioned community meetings and gatherings will be forbidden without written permission from the local authority. Also discussed was the disposition of dead bodies and under what conditions can funerals take place. Funerals will be replaced with memorial services and will be limited to immediate members of the family. This was a complete shock to me as I have never heard of such a thing. It is clear that the martial law authorities are anticipating mass casualties. Is this why we are seeing so many medical transport vehicles in these massive convoys around the United States? 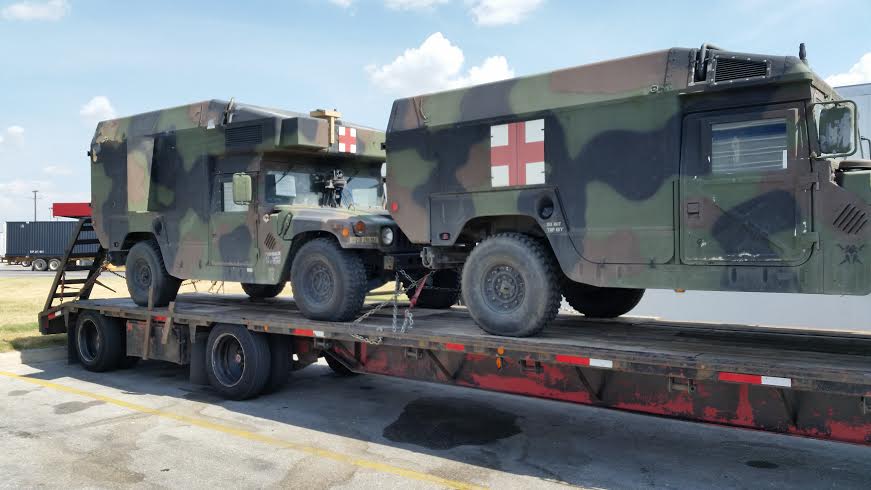 17. Under “rare conditions” the military can secure private living space for their personnel. This is a clear violation of the Third Amendment, No Quartering Act.

18. Upon approval of the governing military authority, local law enforcement can recruit members of the community to form a posse (i.e. Brown Shirts?).

19. Violators of the martial law provisions can be tried as enemy combatants at the discretion of the local military authority (i.e. NDAA).

20. Energy conservation is called for in the event that there is power, or limited power, in any given area. Mention of home inspections for high energy users was part of this provision. I suspect that this is the guise under which gun confiscation will take place. It seems clear that the authorities want to gain access to our homes in a variety of ways. I am certain that this has to do with gun confiscation.

21. Farms, ranches and any food production center can be nationalized for the public good. This includes the transportation associated with potential food distribution.

22. With regard to the distribution of food, water and medicine (when possible), local community members will be conscripted to assist with the distribution. (EO 13603).

23. All private transportation can be commandeered for official use.

24. No private use of vehicles except with written permission from the local commander.

25. Schools, churches and other community centers will be closed during any period of chaos. These facilities will be allowed to reopen on a limited basis, and under specified conditions, when order is restored. This brings up the notion of the Clergy Response Team and the fact that the people will be told to follow Romans 13 and obey the governmental authority.

It was clear to me that the planning for mass casualties is a major concern. What to do with the bodies is of paramount importance to the authorities.

The document did not discuss any precipitating incident to martial law. The language is so vague in some places that it is easy to assume the worst with regard to the underlying intentions of martial law.

I want to stress that what I was allowed to view was a working document, not an official document. However, the list was very reflective of what I wrote about before. However, the notion of gun confiscations occurring under the premise of reducing energy use in a critical area, was something that had never occurred to me.

I suspect the language is vague for a couple of reasons. First, the powers that be do not want the troops to begin to form negative opinions which could lead to opposition from troops initially called upon to enforce these martial law regulations. Troops cannot be given much time to ponder their actions if compliance to an edict is offered which is fundamentally in opposition to many of the troops belief systems. . Secondly, by being vague, the authorities retain plausible deniability.

Finally, why was I permitted to see this list and encouraged to write about it? There is a strong move to encourage officers and enlisted men to followed their oath to protect and defend the Constitution. I know of others who have been given much of this information in various formats. I do not feel that this information is exclusive except for the different ways that the authorities want to gain access to your homes for the purpose of gun confiscation.

There is no doubt that many of you will read much more into these 25 provisions that what is written here.